Morphology
The first lesson a student of dermatology must learn is how to properly describe skin diseases. Skin morphology has been well defined over the years and is the basis for all discussions about skin disorders. One must be adept at describing skin lesions before it is possible to develop a differential diagnosis. For example, once it has been determined that a rash is in the morphological category of macule, all rashes in the blistering and nodular categories can easily be excluded from the differential diagnosis. To get a firm grasp of dermatology, one must have an excellent foundation in description and morphology. The most common descriptors used in the dermatology lexicon are discussed here. 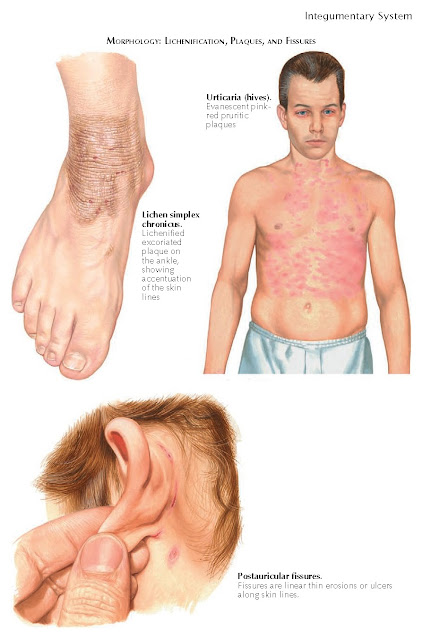 Many adjectives are used in conjunction with primary and secondary descriptive terms to better characterize the lesion and to help determine a differential diagnosis and, ultimately, a diagnosis for the patient. Color is of utmost importance and is universally used in the description of skin lesions. For example, a good description of melanoma would include color, size, regularity, and the primary morphology, such as “a dark black, irregularly shaped macule with a central nodule.”
Other descriptive terms often used in dermatology deal with the configuration of the lesion, such as a linear or an annular configuration. Words such as arcuate, polycyclical, nummular, and agminated are also commonly used. Some skin rashes tend to follow specific types of skin lines, most commonly Langer’s lines (skin tension lines) and Blaschko’s lines (embryological cleavage lines).
The distribution of skin lesions is also important, because some skin diseases have a propensity to occur in specific areas of the body. A classic example is acne, which typically affects the face, upper back, and chest. It would be inappropriate to consider acne in the differential diagnosis of a rash on the hands and feet.
Starting with the primary skin lesions, a macule is most often thought of as a well-circumscribed, flat area on the skin with a distinct color change. The macule may have an irregular or a regular border. Macules are not raised and are essentially nonpalpable. An example of a macule is vitiligo.
A papule is a well-circumscribed, small (<5 mm in diameter) elevation in the skin of variable color. A papule is solid and should not be confused with a vesicle. Papules may be described as flat-topped or umbilicated, and their consistency may be characterized as soft or firm. An example of an umbilicated papule is molluscum contagiosum.
Comedones are seen in acne and in a few less common conditions. Essentially, they come in two forms, open and closed. Open comedones are also known as black- heads. Each comedo represents a dilated follicular infundibulum with a buildup of oxidized keratin. Closed comedones are seen as tiny white papules, which are produced when the follicular epithelium sticks together and seals the follicular orifice.
The word patch is sometimes used to describe a large macule. A more precise definition of a patch is an area of the skin that is not elevated but has surface change such as scale or crust. An example of a patch is tinea corporis. Depending on the source or reference review, the term patch can include either of these two definitions.
A plaque is a well-defined lesion that has a plateaulike elevation and is typically larger than 5 mm in diameter. The term plaque can also be used to describe a confluence of papules. An example of a plaque is a lesion of psoriasis.
A nodule is defined as a space-occupying lesion in the dermis or subcutaneous tissue. Its breadth is typically larger than its height. Surface changes may or may not be present. Most authors agree that nodules are typically larger than 1 cm in diameter, and they can be much larger.
A tumor is generally considered to be larger than 2 cm in diameter, and the term should be reserved exclusively for the description of malignant neoplasms. The words tumor and nodule are sometimes used inter- changeably, which has caused confusion. Tumors can be elevated from the skin and located entirely in the epi- dermis, or they can be space-occupying lesions in the dermis or subcutaneous tissue. Tumors often develop necrosis over time because of their neoplastic nature. A classic example of a skin tumor is a fungating tumor, as seen with mycosis fungoides.
Hives or wheals are also known as urticaria; this is a very specific term used to describe evanescent, pink-red, pruritic plaques that spontaneously develop and remit within 24 hours. They tend to be extremely pruritic. Dermatographism is commonly seen in association with hives.
Blistering disorders are common pathological conditions, and their lesions may be described as vesicles or bullae. A vesicle is defined as a fluid-filled elevation less than 1 cm in diameter. A bulla is a fluid-filled epidermal cavity larger than 1 cm in diameter. Blisters are most often filled with serous fluid, but they can be filled with a purulent exudate or a hemorrhagic infiltrate. Bullae are often described as flaccid or as firm and intact.
Pustules are small elevations in the epidermis that are filled with neutrophilic debris. The infiltrate within a pustule may be sterile or infectious in nature. An example of a sterile pustule is pustular psoriasis. An example of an infectious pustule is folliculitis. 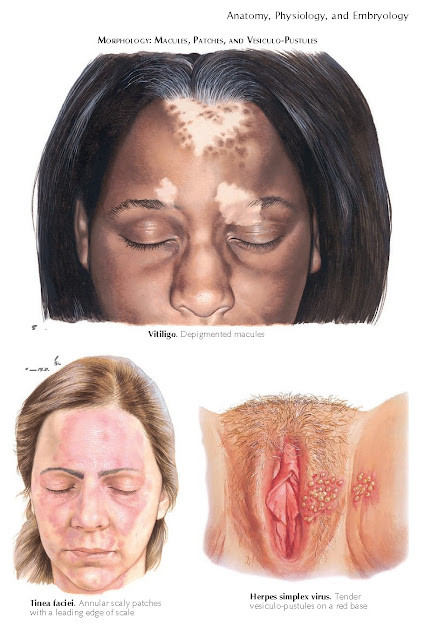 Secondary lesions are often encountered in the dermatology clinic and are of utmost importance when describing skin lesions and rashes. The word scale is used to describe exfoliating keratinocytes that have typically built up in such a mass that there is obvious surface change to the skin. Normal shedding of keratinocytes occurs on a daily basis, so a small amount of scale is found on every human’s skin. It is the collection in large quantities that allows one to use scale as a descriptive term. Scale must be differentiated from crust. Crust is produced by the drying of blood, serum, or purulent drainage. Most commonly, a crust is described as a scab.
Excoriations are secondary lesions that develop as a result of repetitive scratching. Excoriations are typically linear but can be seen in many bizarre configurations. Erosions are seen in many skin disorders, most commonly superficial blistering diseases, in which the upper layers of the epidermis have been removed, leaving a shallow, denuded erosion. Erosions are defined as breaks in the epidermis. This is in contrast to ulceration, which is defined as a break in the skin that extends into the dermis or subcutaneous tissue or, in severe cases, muscular tissue. A fissure is often seen on the palms or soles; it is a full-thickness epidermal break that follows the skin lines. Fissures have very sharply defined borders and are typically only a few centimeters long.

Scar is another secondary descriptive term used to describe the healing of the epidermis and dermis, usually in a linear or a geographic pattern, caused by some form of trauma or end-stage inflammatory process. Fresh scars are typically pink to red; over time, they mature, becoming flattened and more pale.
Lichenification is seen as an end process in chronically rubbed skin. The skin lines become accentuated and thickened from the chronic rubbing. A classic example of lichenification is lichen simplex complex.
The last of the secondary descriptive lesions dis- cussed here are burrows. Burrows are seen as tiny, irregularly shaped, serpiginous or linear scale, often with a tiny black dot at one end. They are pathognomonic for the diagnosis of scabies, and the tiny black dot represents the scabies mite.