Cardiovascular Effects Of Exercise
Figure 30a summarizes important cardiovascular adaptations that occur at increasing levels of dynamic (rhythmic) exercise, thereby allowing working muscles to be supplied with the increased amount of O2 they require. By far the most important of these adaptations is an increase in cardiac output (CO), which rises almost linearly with the rate of muscle O2 consumption (level of work) as a result of increases in both heart rate and to a lesser extent stroke volume. The heart rate is accelerated by a reduction in vagal tone, and by increases in sympathetic nerve firing and circulating catecholamines. The resulting stimulation of cardiac β-adrenoceptors increases stroke volume by increasing myocardial contractility and enabling more complete systolic emptying of the ventricles. CO is the limiting factor determining the maximum exercise capacity.


Table 30.1 shows that the increased CO is channelled mainly to the active muscles, which may receive 85% of CO against about 15–20% at rest, and to the heart. This is caused by a profound arteriolar vasodilatation in these organs. Dilatation of terminal arterioles causes capillary recruitment, a large increase in the number of open capillaries, which shortens the diffusion distance between capillaries and muscle fibres. This, combined with increases in PCO2, temperature and acidity, promotes the release of O2 from haemoglobin, allowing skeletal muscle to increase its O2 extraction from the basal level of 25–30% to about 90% during maximal exercise.
Increased firing of sympathetic nerves and levels of circulating catecholamines constrict arterioles in the splanchnic and renal vascular beds, and in non-exercising muscle, reducing the blood flow to these organs. Cutaneous blood flow is also initially reduced. As core body temperature rises, however, cutaneous blood flow increases as autonomically mediated vasodilatation occurs to promote cooling (see Chapter 25). With very strenuous exercise, cutaneous perfusion again falls as vasoconstriction diverts blood to the muscles. Blood flow to the crucial cerebral vasculature remains constant.
Vasodilatation of the skeletal and cutaneous vascular beds decreases total peripheral resistance (TPR). This is sufficient to balance the effect of the increased CO on diastolic blood pressure, which rises only slightly and may even fall, depending on the balance between skeletal muscle vasodilatation and splanchnic/ renal vasoconstriction. However, significant rises in the systolic and pulse pressures are caused by the more rapid and forceful ejection of blood by the left ventricle, leading to some elevation of the mean arterial blood pressure.
Any increase in CO must of course be accompanied by an increase in venous return, which is supported by venoconstriction and the action of skeletal muscle and respiratory pumps. Coupled with the fall in TPR, these actions allow a large increase in CO with little change in CVP (Figure 30c; see Chapter 17). 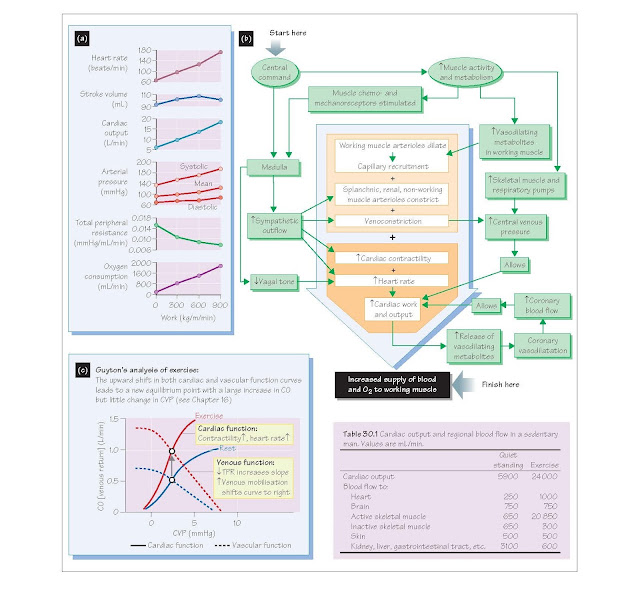 Effects of exercise on plasma volume Arteriolar dilatation in skeletal muscles increases capillary hydrostatic pressure, while capillary recruitment vastly increases the surface area of the microcirculation available to exchange fluid. These effects, coupled with a rise in interstitial osmolarity caused by an increased production of metabolites within the muscle fibres, lead via the Starling mechanism to extravasation of fluid into muscles (Chapter 20). Taking into account also fluid losses caused by sweating, plasma volume may decrease by 15% during strenuous exercise. This fluid loss is partially compensated by enhanced fluid reabsorption in the vasoconstricted vascular beds, where capillary pressure decreases.

Regulation And Coordination Of The Cardiovascular Adaptation To Exercise
In anticipation of exercise, and during its initial stages, a process termed central command (Figure 30b, upper left) initiates the cardiovascular adaptations necessary for increased effort. Impulses from the cerebral cortex act on the medulla to suppress vagal tone, thereby increasing the heart rate and CO. Central command is also thought to raise the set point of the baroreceptor reflex. This allows the blood pressure to be regulated around a higher set point, resulting in an increased sympathetic outflow which con- tributes to the rise in CO and causes constriction of the splanchnic and renal circulations. An increase in circulating adrenaline also vasodilates skeletal muscle arterioles via β2-receptors. The magnitude of these anticipatory effects increases in proportion to the degree of perceived effort.
As exercise continues, cardiovascular regulation by central command is supplemented by two further control systems which are activated and become crucial. These involve: (i) autonomic reflexes (Figure 30b, left); and (ii) direct effects of metabolites generated locally in working skeletal and cardiac muscle (right).

Systemic effects mediated by autonomic reflexes Nervous impulses originating mainly from receptors in working muscle which respond to contraction (mechanoreceptors) and locally generated metabolites and ischaemia (chemoreceptors) are carried to the CNS via afferent nerves. CNS autonomic control centres respond by suppressing vagal tone and causing graded increases in sympathetic outflow which are matched to the ongoing level of exercise. An increased release of adrenaline and noradrenaline from the adrenal glands causes plasma catecholamines to rise by as much as 10- to 20-fold.

Effects of local metabolites on muscle and heart
The autonomic reflexes described above are responsible for most of the cardiac and vasoconstricting adaptations to exercise. However, the marked vasodilatation of coronary and skeletal muscle arterioles is almost entirely caused by local metabolites generated in the heart and working skeletal muscle. This metabolic hyperaemia (see Chapter 23) causes decreased vascular resistance and increased blood flow. Capillary recruitment (see above) is an important consequence of metabolic hyperaemia.
Static exercises such as lifting and carrying involve maintained muscle contractions with no joint movement. This results in vascular compression and a decreased muscle blood flow, leading to a build-up of muscle metabolites. These activate muscle chemoreceptors, resulting in a pressor reflex involving tachycardia, and increases in CO and TPR. The resulting rise in blood pressure is much greater than in dynamic exercise causing the same rise in O2 consumption.

Effects of training
Athletic training has effects on the cardiovascular system that improve delivery of O2 to muscle cells, allowing them to work harder. The ventricular walls thicken and the cavities become larger, increasing the stroke volume from about 75 to 120 mL. The resting heart rate may fall as low as 45 beats/min, due to an increase in vagal tone, while the maximal rate remains near 180 beats/min. These changes allow CO, the crucial determinant of exercise capacity, to increase more during strenuous exercise, reaching levels of 35 L/min or more. TPR falls, in part due to a decreased sympathetic outflow. The capillary density of skeletal muscle increases, and the muscle fibres contain more mitochondria, promoting oxygen extraction and utilization.