The Control Of Blood Volume


The Control Of Blood Volume
The baroreceptor system effectively minimizes short-term fluctuations in the arterial blood pressure. Over the longer term, however, the ability to sustain a constant blood pressure depends on maintenance of a constant blood volume. This dependency arises because alterations in blood volume affect central venous pressure (CVP) and therefore cardiac output (CO) (see Chapter 17). Changes in CO also ultimately lead to adaptive effects of the vasculature which increase peripheral resistance, and therefore blood pressure (see Chapter 39).


Blood volume is affected by changes in total body Na+ and water, which are mainly controlled by the kidneys. Maintenance of blood pressure therefore involves mechanisms that adjust renal excretion of Na+ and water. 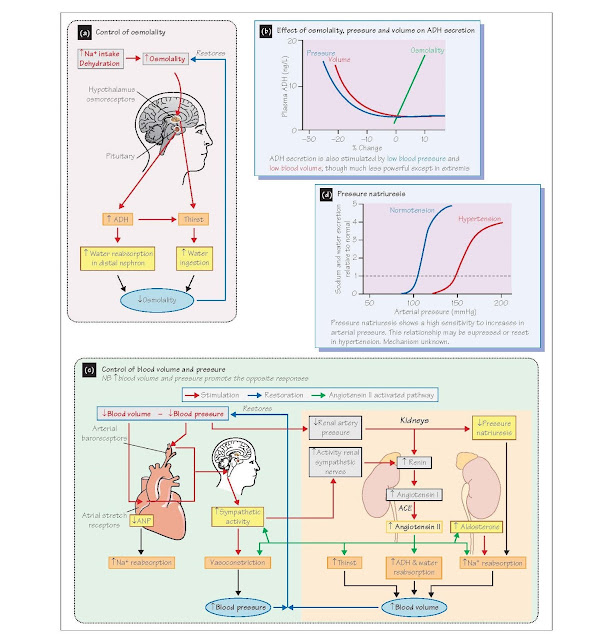 Role of sodium and osmoregulation Alterations in body salt and water content, caused for example by variations in salt or fluid intake or perspiration, result in changes in plasma osmolality (see Chapter 5). Any deviation of plasma osmolality from its normal value of ∼290 mosmol/kg is sensed by hypothalamic osmoreceptors, which regulate thirst and release of the peptide antidiuretic hormone (ADH, or vasopressin) from the posterior pituitary. ADH enhances reabsorption of water by acti- vating V2 receptors in principal cells of the renal collecting duct. This causes aquaporins (water channels) to be inserted into their apical membranes, so increasing their permeability to water. Urine is therefore concentrated and water excretion reduced. ADH also affects thirst. Thus, an increase in plasma osmolality due to dehy- dration causes increased thirst and enhanced release of ADH. Both act to bring plasma osmolality back to normal by restoring body water content (Figure 29a). Opposite effects are stimulated by a reduction in osmolality. ADH secretion is inhibited by alcohol and emotional stress, and strongly stimulated by nausea. Osmoreg- ulation is extremely sensitive to small changes in osmolality (Figure 29b), and normally takes precedence over those controlling blood volume because of the utmost importance of controlling osmolality tightly for cell function (see Chapter 5).
An important consequence of the above is that blood volume is primarily controlled by the Na+ content of extracellular fluid (ECF), of which plasma is a part. Na+ and its associated anions Cl− and HCO − account for about 95% of the osmolality of ECF, thus any change in body Na content (e.g. after eating a salty meal) quickly affects plasma osmolality. The osmoregulatory system responds by readjusting body water content (and therefore plasma volume) in order to restore plasma osmolality. Under normal conditions, therefore, alterations in body Na+ lead to changes in blood volume. It follows thatcontrol of bloodvolume requires regulationof body (and therefore ECF) Na+ content, a function carried out by the kidneys.

Control of Na+ and Blood Volume By The Kidneys
Blood volume directly affects CVP and indirectly affects arterial blood pressure (see Chapter 18). CVP therefore provides a measure of blood volume and is detected by stretch receptors primarily in the atria and venoatrial junction. Arterial blood pressure is detected by the baroreceptors (see Chapter 27), but directly affects renal function via pressure natriuresis. Integration of several mechanisms leads to regulation of Na+ and therefore blood volume (Figure 29c). Pressure natriuresis is an intrinsic renal process whereby increases in arterial blood pressure strongly promote diuresis and natriuresis (Na+ excretion in the urine). While the precise mechanisms remain unclear, it is believed that vasodilator prostanoids and nitric oxide increase blood flow in the renal medulla, thereby reducing the osmotic gradient that allows concentration of urine. Na+ and water reabsorption are therefore suppressed, so more is lost in the urine and blood volume and pressure are restored. Opposite effects occur when pressure is decreased. Pressure natriuresis may be impaired in hypertension (Figure 29d; see Chapter 39).
An increase in blood volume causes stretch of the atria, activating the stretch receptors and also causing release of atrial natriuretic peptide (ANP, see below). Increased atrial receptor activity is integrated in the brainstem with baroreceptor activity, and leads to decreased sympathetic outflow to the heart and vasculature and an immediate reduction in arterial blood pressure. Importantly, sympathetic stimulation of the kidney is also reduced, supressing activity of the renin–angiotensin–aldosterone (RAA) system; increased renal perfusion pressure does the same. Renin is a protease stored in granular cells within the juxtaglomerular apparatus. It cleaves the plasma α2-globulin angiotensinogen to form angiotensin 1, which is subsequently is converted to the octapeptide angiotensin 2 by angiotensin-converting enzyme (ACE) on the surface of endothelial cells, largely in the lungs. ACE also degrades bradykinin, which is why ACE inhibitors cause intractable cough in some patients.
Angiotensin 2 has a number of actions that promote elevation of blood pressure and volume. These include increasing Na+ reabsorption by the proximal tubule, stimulating thirst, promoting ADH release, increasing activation of the sympathetic nervous system and causing a direct vasoconstriction. Importantly, it also promotes release of the steroid aldosterone from the adrenal cortex zona glomerulosa. Aldosterone increases Na+ reabsorption by principal cells in the distal nephron by stimulating synthesis of basolateral Na+ pumps and Na+ channels (ENaC) in the apical membrane. It also conserves body Na+ by enhancing reabsorption from several types of glands, including salivary and sweat glands. ANP is a 28-amino-acid peptide released from atrial myocytes when they are stretched. ANP causes diuresis and natriuresis by inhibiting ENaC, increasing glomerular filtration rate by dilating renal afferent arterioles, and decreasing renin and aldosterone secretion. It also dilates systemic arterioles and increases capillary permeability. On a cellular level, ANP stimulates membrane-associated guanylyl cyclase and increases intracellular cyclic GMP.

Figure 29c summarizes the response of the above mechanisms to a fall in blood volume and pressure. An elevation would induce the opposite effects.
Although pressure natriuresis has been promoted as the primary mechanism controlling blood volume and long-term blood pressure, more recent evidence suggests that the RAA system may be of predominant importance. This concept is perhaps supported by the effectiveness of ACE inhibitors in clinical practice (e.g. Chapters 38 and 47). ANP and other mechanisms seem to have a more limited role, and may be involved chiefly in the response to volume overload.

Antidiuretic hormone in volume regulation Under emergency conditions, blood pressure and volume are maintained at the expense of osmoregulation. Thus, a large fall in blood volume or pressure, sensed by the atrial receptors or arterial baroreceptors, causes increased ADH release (Figure 29b) and renal water retention. The ADH system is also rendered more sensitive, so that ADH release is increased at normal osmolality.