Mean pulmonary arterial pressure is ∼15 mmHg, and left atrial pressure is ∼5 mmHg. The right ventricle is able to drive its entire output through the pulmonary circulation utilizing a pressure head of only 10 mmHg because the resistance of the pulmonary circulation is only 10 - 15% that of the systemic circulation. This arises because the vessels of the pulmonary microcirculation are short and of relatively wide bore, with little resting tone. They are also very numerous, so that their total cross-section is similar to that of the systemic circulation. The walls of both arteries and veins are thin and distensible, and contain comparatively little smooth muscle.
The low pressure within the pulmonary circulation means that regional perfusion of the lungs in the upright position is greatly affected by gravity (Figure 26a). The extravascular pressure throughout the lungs is similar to the alveolar pressure (∼0 mmHg). However, the intravascular pressure is low in the lung apices, which are above the heart, and high in the lung bases, which are below the heart. Pulmonary vessels in the lung apices therefore collapse during diastole, causing intermittent flow. Conversely, vessels in the bases of the lungs are perfused throughout the cardiac cycle, and are distended. A small increase in pulmonary arterial pressure during exercise is sufficient to open up apical capillaries, allowing more O2 uptake by the blood.
The low hydrostatic pressure in pulmonary capillaries (mean of 7–10 mmHg) does not lead to net fluid resorption, because it is balanced by a low extravascular hydrostatic pressure and an unusually high interstitial plasma protein oncotic pressure (∼18 mmHg). The lung capillaries therefore produce a small net flow of lymph, which is drained by an extensive pulmonary lymphatic network. During left ventricular failure or mitral stenosis, however, the increased left atrial pressure backs up into the pulmonary circulation, increasing fluid filtration and leading to pulmonary oedema. Neither the sympathetic nervous system nor myogenic/metabolic autoregulation have much of a role in regulating pulmonary vascular resistance or flow. However, the pulmonary vasculature is well supplied with sympathetic nerves. When stimulated, these decrease the compliance of the vessels, limiting the pulmonary blood volume so that more blood is available to the systemic circulation.
The most important mechanism regulating pulmonary vascular tone is hypoxic pulmonary vasoconstriction (HPV), a process by which pulmonary vessels constrict in response to alveolar hypoxia. This unique mechanism (systemic vessels typically dilate to hypoxia) diverts blood away from poorly ventilated regions of the lungs, thereby maximizing the ventilation – perfusion ratio. HPV is probably caused mainly by hypoxia-induced release of Ca2+ from the sarcoplasmic reticulum within the smooth muscle cells of the pulmonary vasculature. 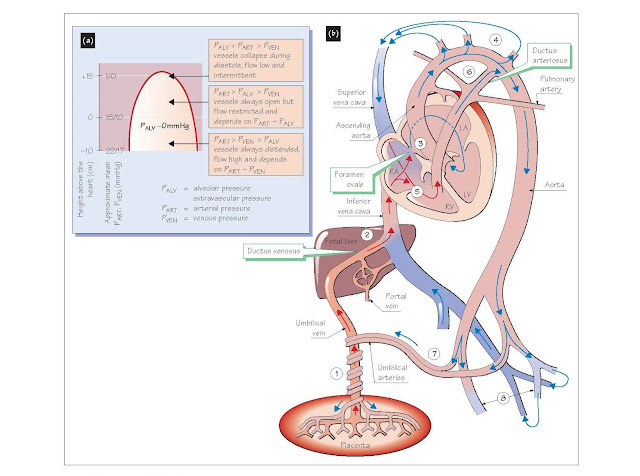 The Skeletal Muscle Circulation
The skeletal muscles comprise about 50% of body weight, and at rest receive 15–20% of cardiac output. At rest, skeletal muscle arterioles have a high basal tone as a result of tonic sympathetic vasoconstriction. At any one time, most muscle capillaries are not perfused, due to intermittent constriction of precapillary sphincters (vasomotion).
Because the muscles form such a large tissue mass, their arterioles make a major contribution to total peripheral resistance (TPR). Sympathetically mediated alterations in their arteriolar tone therefore have a crucial role in regulating TPR and blood pressure during operation of the baroreceptor reflex. The muscles thus serve as a ‘pressure valve’ that can be closed to increase blood pressure and opened to lower it.
With rhythmic exercise, compression of blood vessels during the contraction phase causes the blood flow to become intermittent. However, increased muscle metabolism causes the generation of vasodilating factors; these factors cause an enormous increase in blood flow during the relaxation phase, especially to the white or phasic fibres involved in movement. With maximal exercise, the skeletal muscles receive 80–90% of cardiac output. Vasodilating factors include K+ ions, CO2 and hyperosmolarity. In working muscle their effects completely override sympathetic vasoconstriction, while arterioles in non-working muscle remain sympathetically constricted so that their blood flow does not increase.
Sustained compression of blood vessels during static (isometric) muscle contractions causes an occlusion of flow that rapidly results in muscle fatigue.

The Fetal Circulation
A diagram of the fetal circulation is shown in Figure 26b. The fetus receives O2 and nutrients from, and discharges CO2 and metabolic waste products into, the maternal circulation. This exchange occurs in the placenta, a thick spongy pancake-shaped structure lying between the fetus and the uterine wall. The placenta is composed of a space containing maternal blood, which is packed with fetal villi, branching tree-like structures containing fetal arteries, capillaries and veins. They receive the fetal blood from branches of the two umbilical arteries, and drain back into the fetus via the umbilical vein. Gas and nutrient exchange occurs between the fetal capillaries in the villi and the maternal blood surrounding and bathing the villi. The fetal circulation differs from that of adults in that the right and left ventricles pump the blood in parallel rather than in series. This arrangement allows the heart and head to receive more highly oxygenated blood, and is made possible by three structural shunts unique to the fetus: the ductus venosus, the foramen ovale and the ductus arteriosus (highlighted in Figure 26b).
Blood leaving the placenta (1) via the umbilical vein is 80% saturated with O2. About half of this flows into the fetal liver. The rest is diverted into the inferior vena cava via the ductus venosus (2), mixing with poorly oxygenated venous blood returning from the fetus’ lower body. When the resulting relatively oxygen-rich mixture (about 67% saturated) enters the right atrium, most of it does not pass into the right ventricle as it would in the adult, but is directed into the left atrium via the foramen ovale, an opening between the fetal atria (3). Blood then flows into the left ventricle, and is pumped into the ascending aorta, from which it perfuses the head, the coronary circulation and the arms (4). Venous blood from these areas re-enters the heart via the superior vena cava. This blood, now about 35% saturated with O2, mixes with the fraction of blood from the inferior vena cava not entering the foramen ovale (5), and flows into the right ventricle, which pumps it into the pulmonary artery. Instead of then entering the lungs, as it would in the adult, about 90% of the blood leaving the right ventricle is diverted into the descending aorta through the ductus arteriosus (6). This occurs because pressure in the pulmonary circulation is higher than that in the systemic circulation, as a result of pulmonary vasoconstriction and the collapsed state of the lungs. About 60% of blood entering the descending aorta then flows back to the placenta for oxygenation (7). The rest, now 58% saturated with O2, supplies the fetus’ trunk and legs (8).

Circulatory Changes At Birth
Two events at birth quickly cause the fetal circulation to assume a quasi-adult pattern. First, the pulmonary vascular pressure falls well below the systemic pressure because of the initiation of breath- ing and the resulting pulmonary vasodilatation. Together with constriction of the ductus arteriosus caused by increased blood O2 levels, this reversal of the pulmonary – systemic pressure gradient, which is aided by the loss of the low-resistance placental circulation, abolishes the blood flow from the pulmonary artery into the aorta within 30 min after delivery.
Second, tying off the umbilical cord stops venous return from the placenta, abruptly lowering inferior vena caval pressure. Together with the fall in pulmonary resistance, this lowers right atrial pressure, causing within hours functional closure of the foramen ovale. The ductus venosus also closes with the abolition of venous return from the placenta.
Although these fetal circulatory shunts are functionally closed soon after birth, complete structural closure only occurs after several months. In 20% of adults, the structural closure of the foramen ovale remains incomplete, although this is of no haemodynamic consequence.