GLOMUS TUMOR AND GLOMANGIOMA
Glomus tumors are benign tumors derived from the glomus body. The glomus body is a component of the vascular thermoregulatory unit. These tumors are most frequently encountered in early adulthood and are most commonly found on the digits. Glomus tumors are solitary in nature, and the term glomangioma is used when describing the glomuvenous malformation. This usually manifests as a congenital defect in infants and young children and appears to be a multifocal grouping or mass of coalescent glomus tumors. 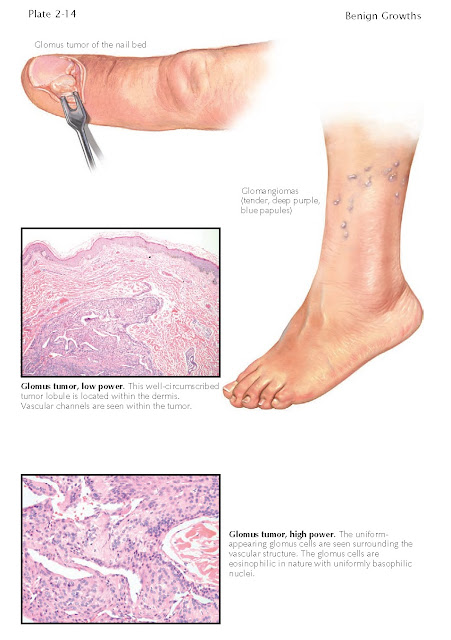 Clinical Findings: The solitary glomus tumor is often found on the digit in a subungual location. The tumors occur equally in men and in women. Lesions have been described in all regions of the skin and also in extracutaneous locations. These tumors are small, well localized, and almost always tender or painful. The glomus tumor is in the differential diagnosis of the painful dermal nodules. On examination, one often observes a 1- to 2-cm, well-circumscribed, blue to purple dermal nodule. It is tender to palpation and can be extremely painful with changes in the ambient temperature.
Glomangiomas are frequently congenital and manifest as a multifocal cluster of coalescing, blue-purple nodules and papules. There is occasionally some surface change over the top of the tumors. The Hildreth sign is a diagnostic maneuver that can be used to help make the diagnosis. The sign is positive if the pain from the glomus tumor decreases or disappears when a blood pressure cuff is placed proximal to the tumor and inflated to a pressure greater than the patient’s systolic blood pressure. Glomangiomas can be confused with hemangiomas or other vascular malformations. The differential diagnosis of a solitary glomus tumor includes angiolipoma, neuroma, eccrine spiradenoma, leiomyoma, and vascular tumors. The differential diagnosis of a glomangioma includes hemangiomas and other vascular malformations.

Histology: The tumor manifests as a wellcircumscribed nodule of glomus cells surrounding a number of small capillaries. The glomus cells are distinctive and uniform. They appear round and have round nuclei. The cytoplasm is scarce and eosinophilic. The background stroma is myxoid, and there is often a fibrous capsule surrounding the entire tumor.

Pathogenesis: Glomus tumors arise from the SucquetHoyer canal. This canal is an arteriovenous shunt found in the small vasculature of the skin. These canals have been found in a higher density within the blood vessels of the digits. They are responsible for thermoregulation and cause shunting of blood in response to neurological and temperature changes. The exact initiating factor is unknown. Anecdotal reports of glomus tumors occurring after trauma have led some to believe that trauma is causative. This may explain the preponderance of the tumors on the digits, where they are prone to trauma. Trauma is unlikely to be the true initiating factor, because these tumors are quite rare and trauma to the digits occurs frequently.
Some glomangiomas have been described to be inherited in an autosomal dominant fashion. These cases are caused by a deletion defect in the glomulin (GLMN) gene, which is located on the short arm of chromosome 1. The exact function of the protein encoded by this gene or how its defect causes glomangiomas is still not understood.

Treatment: Glomus tumors are successfully treated with complete surgical excision. Glomangiomas, because of their size, can be excised in a staged approach or with the help of tissue expanders. Reports of treatment with laser ablation, electrocauterization, and sclerotherapy, with some success, have been documented in the literature.