Control Of Breathing II: Neural Mechanisms
Control of breathing involves a central pattern generator in the brain- stem that sets the basic rhythm and pattern of ventilation and controls the respiratory muscles. It is modulated by higher centres and feedback from sensors, including chemoreceptors (Chapter 11) and lung mechanoreceptors. The neural networks involved are complex, reflecting the need to coordinate ventilation with functions such as coughing, swallowing and vocalization. 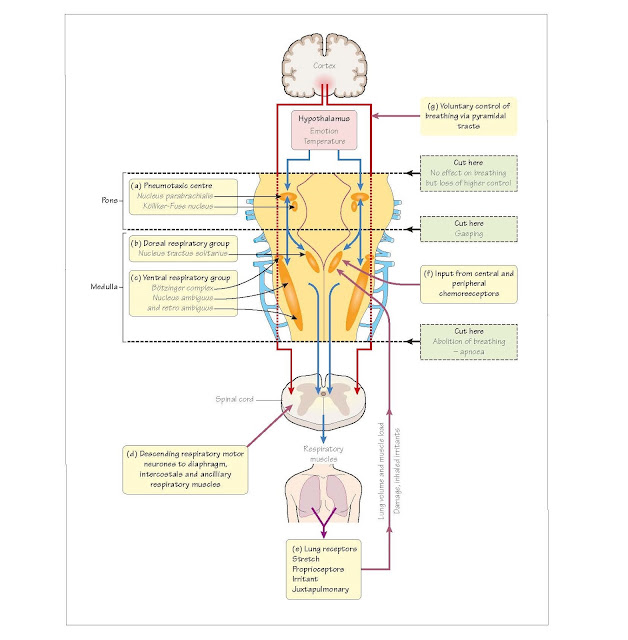 Brainstem and central pattern generator The central pattern generator determines the rate and pattern of breathing, and is a complex network encompassing diffuse groups of respiratory neurones in the pons and medulla. These contain inspiratory and expiratory neurones, with activity corresponding to inspiration and expiration, although others show more complex relationships. Reciprocal inhibition means activity of inspiratory neurones inhibits activity of expiratory neurones, and vice versa.
The medulla contains two groups of respiratory neurones. The dorsal respiratory group (DRG; Fig. 12b) in the nucleus tractus solitarii contains inspiratory neurones and receives ascending input from central and peripheral chemoreceptors (Chapter 11; Fig. 12f), and from lung receptors via the vagus (Fig. 12e). The ventrolateral medulla contains a column of neurones extending from the lateral reticular nucleus and through the nucleus ambiguus, comprising the caudal (expiratory neurones) and rostral (inspiratory neurones) ventral respiratory groups (VRG) and pre-Bo¨tzinger and Bo¨tzinger complexes (Fig. 12c). Although  the  pre-Bo·tzinger  complex  contains  neurones  with  intrinsic activity (pacemakers), these may only be associated with gasping, an autoresuscitative mechanism following hypoxia, as sectioning between the medulla and pons tends to abolish eupnoea (normal breathing) and lead to gasping in the absence of vagal input. Descending output from the medulla regulates activity of respiratory muscle motor neurones (intercostals, phrenic (diaphragm), abdominal) (Fig. 12d).
The pneumotaxic centre is located in the nucleus parabrachialis and Ko¨lliker–Fuse nucleus of the pons (Fig. 12a), and has a critical role in eupnoea and mediating responses to lung receptor stimulation (see below). It receives ascending input from the VRG, although vagal input from lung stretch receptors is routed via the DRG. The input from stretch receptors is important for timing of respiratory rhythm and especially switching inspiration off as lung volume increases. In the absence of vagal input, sectioning the mid-pons causes apneusis (prolonged inspiratory effort with short expirations); it has therefore been suggested that there is an apneustic centre in the caudal pons, possibly associated with Ko·lliker-Fuse nucleus. Descending input from the hypothalamus and higher centres mediates the effects of factors such as emotion and temperature on breathing, but eupnoea is maintained following sectioning above the pons (Fig. 12), although voluntary control is lost. Voluntary control of breathing is mediated by motor neurones from the cortex contained in the pyramidal tracts, which bypass the pneumotaxic and medullary respiratory areas (Fig. 12g). Certain rare brainstem lesions can leave the voluntary pathways intact while impairing brainstem mechanisms, so ventilation may cease when the patient falls asleep (Ondine’s curse; Chapter 44).
The origin of the respiratory rhythm is controversial. Whereas some place this in the VRG and preBo·tzinger complex, others suggest a switching concept, with eupnoea reflectin   the output of a pontomedullary neuronal circuit that includes pneumotaxic (and apneustic) centres, VRG and DRG. In either case, cycling or switching due to reciprocal inhibition and 'off switches' within these networks is probably the source of the rhythm of breathing rather than specifices pacemaker neurones.

Lung receptors and reﬂexes
Stretch receptors are located in smooth muscle of the bronchial walls. These are mostly slowly adapting (continue to fir with sustained stimulation). Their afferent nerves ascend via the vagus. Stimulation of stretch receptors causes inspiration to be shorter and shallower and delays the next cycle. These receptors are largely responsible for the Hering Breuer inspiratory reﬂex, where lung inflation inhibits inspiratory muscle activity. Conversely, the deﬂation reﬂex augments inspiratory muscle activity on lung deflation These reflexs are weak during normal breathing in adults, but become more relevant when tidal volume is large (>1 L, e.g. in exercise). The reflex is very sensitive in neonates to protect the lungs against overinflatio due to the highly compliant nature of the chest wall.

Juxtapulmonary or ‘J’ receptors are located on alveolar and bronchial walls, close to the capillaries. Their afferents are small un- myelinated (C-fibre or myelinated nerves in the vagus. Activation causes apnoea (cessation of breathing) or rapid shallow breathing, falls in heart rate and blood pressure, laryngeal constriction and relaxation of skeletal muscles. J receptors are stimulated by increased alveolar wall fluid pulmonary congestion and oedema, microembolisms and inflammator mediators such as histamine all of which are associated with lung disease. The general action of J receptors is depression of somatic and visceral activity, which may be appropriate for serious lung damage as this would suppress metabolism in the face of compromised gas exchange.

Irritant receptors are located throughout airways between epithelial cells, with rapidly adapting afferent myelinated fibre in the vagus. Receptors in the trachea lead to cough those in lower airways to hyperpnoea. They also cause reflex bronchial and laryngeal constrictions. Irritant receptors are stimulated by irritant gases, smoke and dust (Chapters 18 and 33), but also by rapid large inflation and deflations airway deformation, pulmonary congestion and inflammation Irritant receptors are responsible for the deep augmented breaths or sighs seen every 5-20 minutes at rest, which reverse the slow collapse of the lungs that occurs in quiet breathing. They may be involved with the firs deep gasps of the newborn ('firs breath') and the Hering-Breuer deflationar reflex.