Interpretation of Visceral Pain
Pain is one of the most important clues to the presence of a disorder in the digestive system. After upper respiratory infections, abdominal pain is the second most common cause of absenteeism from work or school. Of the four cardinal presentations of illness of the digestive system (pain, bleeding, obstruction, and perforation), pain may be the most challenging to interpret. Understanding the physiology and pathophysiology of visceral nociception is essential to developing a well-conceived approach to understanding and diagnosing pain in all of the visceral organs of the abdomen and chest. The first step in interpreting the patient’s experience of pain is to characterize its severity, associations, consistency, duration, and location. Pain associated with swallowing, eating specific foods, or defecation but not with exercise is most likely emanating from the digestive system. 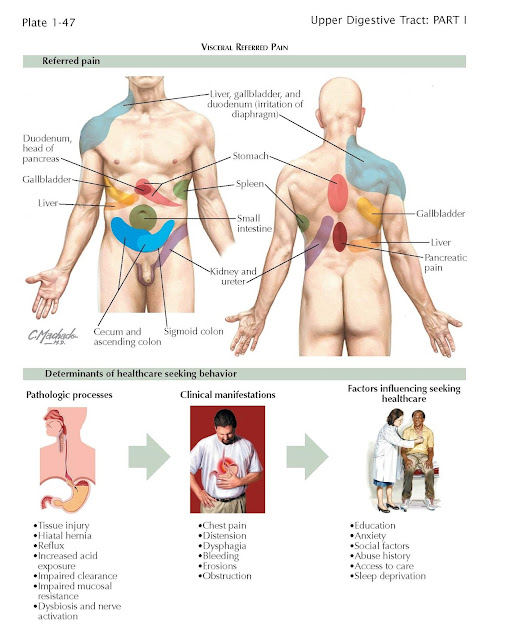 Pain is often the most important issue for the patient. Assessing its severity is highly subjective; the clinician must distinguish pain associated with functional disorders from that associated with life-threatening disorders. The severity of pain may be similar in both circumstances. Pain should be described on a scale of 1 to 10, with 1 being minor discomfort and 10 being the most severe pain the patient has ever experienced. Unfortunately, the intensity of pain does not correlate well with the severity of an underlying disorder. For example, patients with esophageal reflux but normal endoscopic findings often experience more severe pain than patients with erosive esophagitis, strictures, or even Barrett esophagus, a premalignant condition of the esophagus. Furthermore, functional pain is often characterized by the patient as unbearable because of the patient’s hypervigilance to the digestive system. Some patients ignore early signs of abdominal discomfort only to later discover that they were due to impending obstruction from a severe inflammatory or malignant disorder. Encouraging patients to achieve the right balance between paying attention to the body’s messages and ignoring or denying painful signals from the gut can be a key to helping them achieve good health. Functional pain has been defined as the presence of disordered gastrointestinal function despite a normal gross appearance and anatomy and normal initial blood test results. Functional pain is not indicative of a weak character or weak countenance, nor is it imaginary pain, falsified pain, or malingering. Clarifying that these symptoms are “real” is more difficult for functional pain due to muscle spasms or to subclinical injury such as esophageal spasm, nonerosive esophageal reflux, non- ulcer dyspepsia, biliary dyskinesia, or irritable bowel syndrome, which are characterized by motility disorders that are rarely identified on motility testing, much less on endoscopic or radiologic findings. Diagnosing these and other functional disorders may be attempted as “diagnoses of exclusion.” Such attempts are unacceptable for any physician who hopes to keep unnecessary health care expenditures at a minimum.
The severity of pain is influenced by a variety of nonorganic issues, including the patient’s psychological state, previous experiences, educational level, and sociologic factors. At the same time, it is important to appreciate that dismissing patient symptoms as “functional” all too often leads to missing rare diagnoses such as malabsorption, preventable food reactions or allergies, porphyria, vasculitis, or Crohn disease. For example, for many years, pain was often attributed to the common functional bowel problem of irritable bowel syndrome; now, however, we can easily diagnose the cause of such pain as small intestinal bacterial overgrowth, lactose or other disaccharide malabsorption problems, celiac disease, or nonceliac gluten sensitivity.
Localization of pain is also important. Unfortunately, localization can be very challenging for the patient because of the physiology of visceral nociception. When taking the medical history, the clinician should try to identify the location of the pain at its onset and determine if it has changed. Pain that is variable and inconsistent in its location, severity, or associations suggests a functional pathophysiology. Pain that is severe in the daytime and at times of stress but absent at night is also more likely functional. In some conditions, the perceived movement of pain may help to localize the source, particularly if the pain is intensifying. The classic example of this is acute appendicitis. This acute abdominal emergency often begins with vague pain across the abdomen or in the periumbilical region. When the peritoneum becomes inflamed, the location becomes clearer and usually ends in a point of tenderness in the right lower quadrant over the affected organ known as the McBurney point (one third of the distance from the anterior superior iliac spine to the umbilicus).
The most likely source of abdominal pain is often suggested by a careful history and physical examination. Four regions should be considered. Determining which side the pain is on is also helpful, but even cholecystitis and appendicitis may present with left-sided pain. Limi- tation in the ability of the history and physical examination to localize the source of visceral pain is in stark contrast to somatic pain, which can usually be pin-pointed to within a few millimeters. These limitations are due to the anatomic and physiologic distinctions between the visceral and somatic nervous systems.
Visceral receptors cannot distinguish the cause of the pain as inflammation, ischemia, malignant or infectious invasion, or distention (the commonest cause). At the level of a receptor, somatic sensation can rely on a host of distinct receptor types of high density in the skin and in striated muscles innervated by the CNS. In contrast, afferent receptors in viscera are sparse and most are naked nerve endings that respond to a variety of stimuli (polymodal). Receptors that are often useful in localizing pain are in muscle spindles in the muscularis propria or encapsulated pacinian corpuscles in the mesentery. 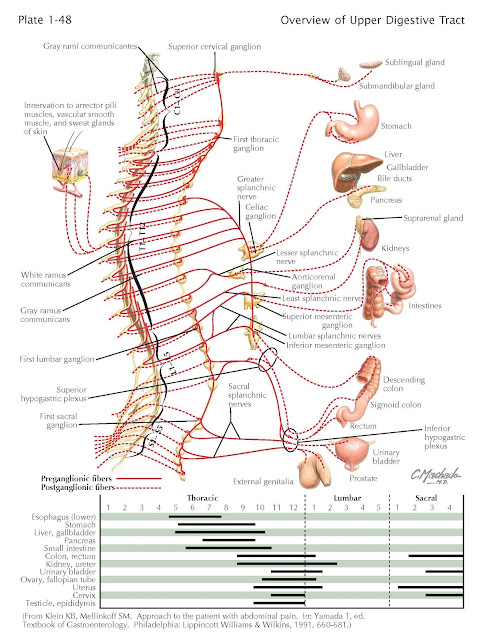 Another factor commonly leading to confusion regarding gastrointestinal symptoms is the tendency of a patient to adapt to chronic and persistent stimuli. Instead of increasing feedback to the CNS, persistent stimulation of gut receptors gradually leads to a distinguished signal output over time. The frequency with which these and other receptors discharge electrical currents gradually decreases over time when a stimulus is persistent. Adaptation may be dangerous when the body no longer recognizes a signal of severe distention from obstipation or invasion from a malignancy.
Nerves carrying afferent information do so through unmyelinated C-type fibers. The nerves may be in the vagus nerves, in which 80% of the fibers are afferent and which terminate in the nodose ganglion. Others travel in the sympathetic system through the dorsal root ganglia from splanchnic nerves (20% afferent) or pelvic nerves (50% afferent). Afferent signals travel to the spinal column in nerves that coalesce with somatic nerves in the dorsal horn. This sets up a relationship between visceral and somatic structures that may create unusual radiation patterns to the musculoskeletal system known as referred pain. Examples of viscerosomatic convergence leading to referred pain are gallbladder and liver pain to the right shoulder, esophageal and cardiac pain to the left arm, and kidney pain to the perineum or scrotum. Within the dorsal roots, nerve signals may be transmitted to the CNS bilaterally, a fact that explains why visceral pain is often poorly localized to one side of the body or the other.
Perhaps the most significant limitation of visceral pain is the fact that afferents from each organ enter the spinal column through splanchnic nerves at multiple levels, with multiple other organs. The phrenic nerve therefore carries afferent information from the liver capsule, spleen, and diaphragm through C3-C5; the greater splanchnic from many upper gastrointestinal organs, including the gallbladder, stomach, pancreas, and small intestine, through T6-T9; and the lesser splanchnic from the colon and appendix, as well as the kidney, ureters, urinary bladder, ovaries, and uterus, through T11-T12. Overlap occurs again at the level of the splanchnic nerves, which innervate multiple organs, including the cervix, testicles, epididymis, sigmoid, and rectum, through T11-L1. This convergence of afferent fields makes it difficult for the patient, much less the clinician, to identify the source of the pain. The convergent fields obviate the possibility of a viscerotopic distribution of visceral afferents in the brain, as occurs so precisely for somatic nerves. Only the pharynx and esophagus show any clear viscerotopic pattern. This pattern of distribution occurs within the brainstem near the swallowing centers.
Pain perception may be altered at the level of the spinal cord by inhibitory input from the CNS or spinal cord. Afferent nerve input to the spinothalamic sensory pathways may be disrupted by inhibitory signals descending from the frontal cortex. This phenomenon can be helpful in a situation in which a patient needs to ignore pain to be able to continue to function. This reflex is similar to the gate theory for exceptional somatic nerve and muscle function in times of pain or exceptional need. Such pathways can become maladaptive, however, when a patient uses them to suppress important information that should result in seeking medical care for pathologic symptoms.
In summary, visceral pain is a subjective symptom of great clinical significance that can only be interpreted using a biopsychosocial model rather than a strict medical model and must take into account the many limitations of visceral nociception.