Gastrointestinal Hormones
The scientific field of endocrinology began with the discovery of secretin in 1904 by Starling. Since then it has been shown that an incredibly diverse list of digestive tract functions are influenced by a variety of gastrointestinal hormones. Specific functions of gastrointestinal hormones and their respective disorders will be discussed in greater detail in chapters on specific organs. A brief outline of major gut hormones follows, as well as a tabulation of major digestive tract hormones. 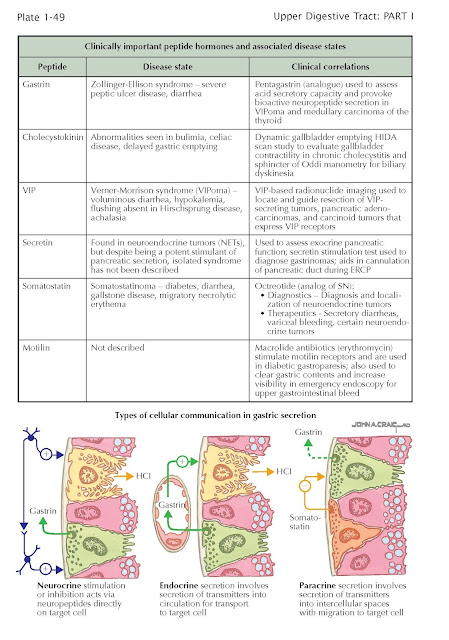 The hormones of the gastrointestinal tract are released by three mechanisms. Endocrine cells of the pancreas congregate in Langerhans islets that are inter- mingled with groups of exocrine cells in the acini and in the ducts. There they release a variety of hormones into the adjacent capillaries. In contrast, most endocrine cells in the digestive system are unlike those in other hormone-secreting organs of the endocrine system which are localized to specific organelles in an organ or make up an entire gland. Enterochromaffin cells containing peptide hormones and nonpeptide transmitters are interspersed between other epithelial cells along the surface of the mucosa throughout the stomach and intestines. The apical border of these specialized cells reaches into the lumen, where microvilli can react to changes in the chemical concentration of intraluminal contents. Gastrointestinal hormones are released from these epithelial cells by three different modalities: (1) They may be released into the local capillaries and thus into the systemic vascular system in a typical endocrine fashion, as occurs in the pancreas; hormones released in this endocrine fashion influence other digestive tract functions, the blood flow, or the appetite in response to specific stimuli to the mucosa. (2) Other endocrine cells release their hormones locally, through specific organelles that release directly onto nearby cells in a paracrine fashion. (3) Hormones may be released into the interstitial space in a less specific exocrine manner. Through these highly specialized mechanisms, hormones are released systemically, locally, or specifically onto nearby targeted cells.
Isolation, sequencing, and molecular analysis of intracellular messaging systems that modify the release of gastrointestinal hormones have revealed just how complex the regulation of these mediators are as they influence gut function. A common feature of gastrointestinal hormones is the complex way in which they are synthesized and processed post translationally. The hormones are typically derived from a large pre translational messenger RNA that may contain more than one hormone sequence. The translational products of these mRNA messages are long peptide chains of prohormones or pre hormones. Post translationally they are cleaved into hormones of varying lengths, each of which has a different affinity for its receptor ligand (e.g., gastrin may circulate as big-gastrin 36, gastrin 34, or a smaller version of gastrin-8).
Neuroendocrine cells can grow into tumors that may result in complex, often characteristic clinical syndromes. These symptomatic neuroendocrine tumors may occur sporadically or as part of the inherited syndrome multiple endocrine neoplasia, which is due to a mutation of the MEN-1 gene which encodes a cyclindependent kinase inhibitor. This autosomal dominant syndrome is associated with tumors of the islet cells of the pancreas, parathyroid glands, and pituitary gland. It may also be associated with tumors of the adrenal cortex, carcinoid tumors, and nonendocrine tumors, including angiofibromas, leiomyomas, collagenomas, lipomas, and meningiomas.
Increased understanding of gastrointestinal hormones has led to a variety of diagnostic and therapeutic uses for them. One of the most valuable tools for localizing and evaluating neuroendocrine tumors is a 111indium-labeled radioactive modification of the somatostatin molecule in the “octreotide scan” (somatostatin receptor scintigraphy). Modified somatostatin is also used to treat upper gastrointestinal bleeding from esophageal varices.