Overview of Protective Mechanisms
Many normal physiologic functions necessary for breakdown and processing of ingested nutrients also pose a potential risk to health. These include the normal mechanical forces associated with gastrointestinal motility, extreme acidic content of the stomach, the potent enzymes secreted by the pancreas and intestinal epithelium, the caustic nature of bile salts, and the trillions of intraluminal microorganisms. The digestive system must also have protection from ingested substances that pose a risk to mucosal integrity and health. Even without gross disruption of the integrity of the luminal organs, as occurs with penetrating wound injury or disorders that lead to mucosal ulceration or perforation, there is a constant potential for mucosal invasion at a cellular level. 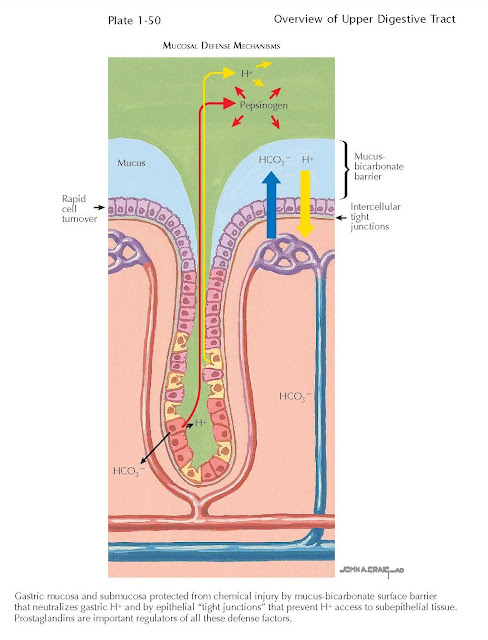 The digestive system has incredibly complex and intricate immune mechanisms that defend against microorganisms. These immune systems are extensive and include both systems used by the rest of the body and systems specific to the digestive tract, including intraepithelial lymphocytes; specialized M cells; immunoglobulin A (IgA), the gut-associated immunoglobulin submucosal immune cells; and cells outside the digestive system, known as gut-associated lymphoid tissue (GALT) cells.
Epithelial lining cells of the digestive system have highly specific structures designed to prevent back diffusion of intraluminal contents across the epithelium. These include the ubiquitous secretion of mucus, specialized apical surface characteristics, and cell-cell adhesion complexes such as tight junctions. The intraluminal microorganisms pose a great threat, but they also have a protective benefit (see Plate 1-54). There are also a host of nonimmune defense mechanisms at play moment by moment to sustain the integrity of the digestive system in the hostile environment of a “tube within a tube.” We will summarize these other nonimmune defense mechanisms in this section, including motility, secretion, and blood flow.
Motility plays an important role in protecting the digestive tract from damage and in maintaining health. Propulsive contractions of the muscularis propria occur in all luminal organs, including peristalsis, migrating myoelectric complexes (phase III of the interdigestive motor complex), and mass actions in the colon. Most contractions are not propulsive but serve to mix the intraluminal contents and increase their exposure to the luminal surface to facilitate digestion and absorption. In the composite picture, however, the net sum of many propulsive contractions and fewer retrograde contractions results in a net force propelling luminal contents in an oral to anal direction. This prevents regurgitation and limits the accumulation of microorganisms in the upper gastrointestinal tract. Tonic contractions of the sphincters also help to maintain the correct flow of luminal contents. The active mixing and propulsive contractions of the muscularis mucosa and muscularis propria enhance digestion by increasing the opportunity for luminal contents to be exposed to absorptive functions and brush-border enzymes and enhancing the diffusion of nutrients in and enzymes out to the lumen by reducing stasis, which could result in increased microorganism concentrations and depth of the “unstirred water layer” (thus, potentially injurious substances are exposed to chemical degradation before they can induce injury). They also protect the mucosa by limiting the duration of exposure of mucosal cells to potentially injurious agents, including organisms, medications, and particulate material, that can have mechanically injurious properties.
Oral, pharyngeal, and upper esophageal sphincter relaxation works in an intricately orchestrated way to propel liquids and solids away from the nasal passages and larynx to protect against nasopharyngeal regurgitation and pulmonary aspiration. The esophageal con- tractive force moves down the esophagus in less than 10 seconds in a coordinated, single-ring–like peristaltic sequence to propel the swallowed bolus into the stomach. Peristalsis creates a stripping wave to propel the potentially dangerous contents further away from the airway and below the check-valve function of the lower esophageal sphincter. When the sphincter competence is interrupted, a secondary (nonvoluntary) peristaltic contraction pushes regurgitated gastric contents away from the airway and pharynx back into the stomach.
In the stomach, ingested materials are triturated or ground into smaller particulate matter that can be acted upon more effectively by digestive secretions. The pyloric sphincter serves a “sieving function” that permits only small particles to pass. This creates a soft chyme coated with mucus which can easily pass through to the rest of the digestive tract. In so doing it not only optimizes the surface area for digestion but further reduces the size of particulates to prevent larger matter from interfering with digestion or becoming lodged in the lumen or ileocecal sphincter.
Arguably one of the most complex and fascinating physiologic activities in the digestive system is the pattern of interdigestive motor complexes that occurs after digestion of a meal. Initially, after the intense contractile activity associated with mixing and propelling nutrients down the digestive system there is a period of rest. Then, after a brief period of active, mixing (segmental) contractility, the intestinal housekeeper passes from the gastroesophageal junction to the distal ileum or ileocecal sphincter. This sweeping wave of intense contractility provides a mechanism for clearing the stomach and small intestine of any indigestible solids, microorganisms, and waste products to prepare it for the next meal. In so doing, larger particles such as sinew, indigestible food stems, large seeds, or such modern solids as swallowed gum are retained in the stomach during digestion so that they do not interfere with the body’s need to capitalize on all swallowed nutrients, until the house-keeper wave propels them as waste into the colon. This cycle continues in mammals such as dogs every 90 minutes in a strikingly regular way, but it is less regular in humans. The cycle is interrupted by eating and is initiated through the action of the hormone motilin. 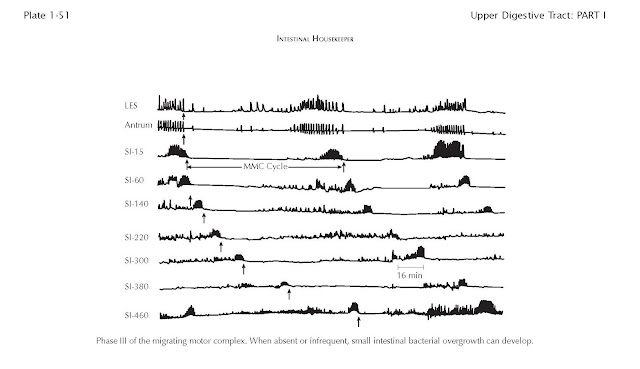 Secretions can both damage and protect the epithelium of the luminal organs. Peristalsis and mixing contractions of the luminal organs can, however, produce incredible forces against the mucosa. To reduce the impact of these forces, epithelial cells and submucosal glands from the mouth to the anus create a thin layer of slimy substances, including mucins, phospholipids, and the trefoil-factor family of peptides, which lubricate the wall and reduce friction. Mucus is synthesized in the Golgi apparatus of surface mucus cells and submucosal cells and packaged into secretory granules that discharge their contents from the apical surfaces of cells. Mucus-secreting cells can also deliver their protective substance into the lumen by accumulating large quantities of mucus in their cytoplasm and then exfoliating the entire cell into the lumen.
Mucus not only provides a protective effect by lubrication but establishes a diffusion barrier that creates a pH gradient above surface mucus cells that face the lumen of the stomach or duodenum; it can contain extraordinary concentrations of acid, to a pH of 1.0 to 1.5. Although the diffusion barrier of mucus alone is ineffective against the diffusion of protons (hydrogen ions from hydrochloric acid), it can effectively slow the diffusion of the much larger molecules of bicarbonate secreted from the surface mucus cells and glands of the stomach. This creates a pH gradient by slowing the diffusion of the much larger bicarbonate ions away from the mucosa, where a much safer pH of 7.0 is seen at the cell surface; the gastric lumen pH of 1.0 to 1.5 is prevented from injuring the cell.
Secretion of fluids also provides a protective function. The secretion of electrolytes and accompanying diffusion of water by salivary, gastric, duodenal, pancreatic, and gallbladder epithelia dilute ingested nutrients to facilitate digestion and transit. It also provides a means of diluting potentially injurious chemicals and disperses them for processing by other defense mechanisms. Secretion of high concentrations of hydrochloric acid by gastric parietal cells creates a pH of 1.0 to 1.5. This solution protects the body from potentially injurious organisms by effectively killing microorganisms that are ingested or that grow in the oral or aerodigestive cavities. This environment sterilizes intraluminal contents in the stomach and duodenum. When acid secretion is decreased by medications or gastric atrophy, there is an increased risk for infection and for small intestinal bacterial overgrowth. The latter can lead to bile salt deconjugation and competition for nutrients, most notably vitamins such as B12. Digestive enzyme and bile salt secretion also reduces the survival of all but the most resistant microorganisms.
Each of these nonimmune defense mechanisms depends on rich mucosal blood flow to occur. When this blood flow is reduced by the ‘mucosal steal’ that occurs as a result of hypotension or sympathetic over-load, the risk for mucosal injury is increased. Regulatory messengers that enhance mucosal protective mechanisms, including blood flow, such as prostaglandins, are also critical for maintaining mucosal health.