Immune Defenses of the Digestive System


Immune Defenses of the Digestive System
It has often been emphasized that the digestive system “tube” is the host to a very hostile intraluminal environment that is actually not part of the organism itself. This tube includes microorganisms and chemicals that if not kept in check can quickly result in the patient’s death. It is critical for health that the luminal organs have mechanisms that are highly selective in identifying foreign antigens and thus prevent the invasion of luminal microorganisms through or between epithelial cells into the submucosa, where they can invade the rest of the body. This system must also be able to distinguish between harmless commensal organisms and organisms that cause disease. The extensive, specialized system of immune cells that constantly defend against luminal attack with a perpetual state of controlled inflammation described in this section is known as the GALT system. If the GALT system is not effective, microorganisms can invade; if it is overly active, autoimmune disorders result, such as chronic gastritis, celiac disease, or inflammatory bowel disease. Other defense mechanisms are discussed with Plates 1-50, 1-51, 1-53, and 1-54. 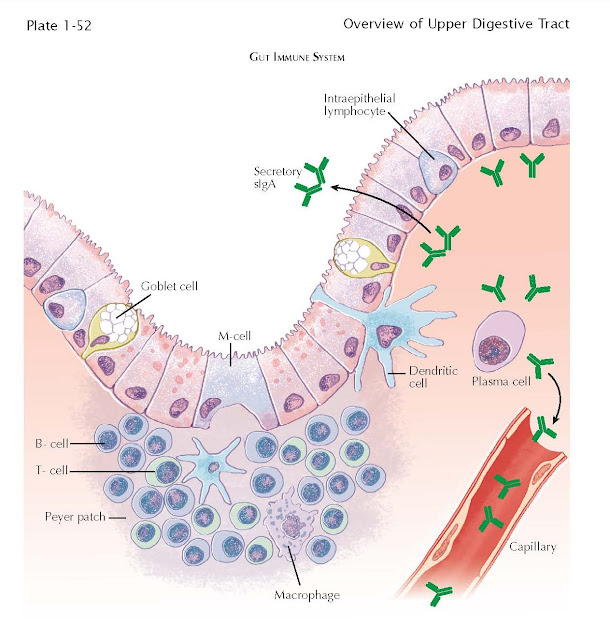 Epithelial cells provide the first line of both mechanical and immune defenses. This is possible because the cells not only have specialized qualities that prevent fluid and bacterial movement through or between cells, but they can also process antigenic material and function as antigen-presenting cells.
Lymphocytes are the next line of defense in the digestive system. In fact, there are over a trillion immune-active cells in the gut, making it by far the largest lymphoid organ in the body. A fascinating, distinct subclass of lymphocytes, the intraepithelial lymphocytes, migrate into the intercellular space between epithelial cells. There they provide an important cytotoxic and antiviral line of defense but play little, if any, role in processing the immune response cascade. This is achieved by a wide variety of lymphocytes, macrophages, and dendritic cells found in the lamina propria of the intestinal organs, and to a lesser extent in the stomach. The esophagus has lymphocytes, but in a normal state has no eosinophils, mast cells, or polymorphonuclear cells.
Terminally differentiated B lymphocytes become plasma cells in the lamina propria, where they are the major source of IgA. IgA synthesized in the gut can be released in monomers into the circulation. IgA is also secreted into the lumen of various organs, including the gut, as secretory IgA in the form of dimers, which are two IgA molecules coated with a specialized secretory component that prevents enzymatic digestion. Secreted IgA dimers are kept near the surface by becoming trapped in the mucus glycocalyx. Intraluminal secretory IgA that reaches the distal ileum can be reabsorbed and transported to the Kupffer cells of the liver, where the antigen can be destroyed and the secretory IgA released into the bile, and thus circulated back to the intestinal lumen.
Dispersed between epithelial cells of the small intestine can be found highly integrated antigen-processing structures consisting of modified microfold epithelial cells (M cells) and their adjacent lymphoid follicles, or Peyer patches. A Peyer patch is a highly active accumulation of macrophages, dendritic cells, and T and B lymphocytes which can evaluate antigens and even whole microorganisms brought across the epithelium through the porous M cells and their adjacent specialized epithelial cells. Submucosal dendritic cells independent of M cells also play a key role as antigen- presenting cells. Once activated, B-cell and T-cell blasts can leave the Peyer patch and enter the circulation or be carried by the lymphatics to adjacent nodes or to the bloodstream.
Another important part of the immune defense systems for the digestive system are the large numbers of lymph nodes found throughout the mesentery and the larger accumulations of lymph glands at the base of the three major sources of arterial blood to the gut, the celiac, superior mesenteric, and inferior mesenteric arteries.
Finally it must be remembered that the liver is second only to the small intestine as the second largest reticuloendothelial organ in the body. Antigens and microorganisms that escape other gut defenses are carried to the liver, where they can be filtered from the blood by sinusoidal Kupffer cells.