Epithelial Cell Defense Mechanisms of the Digestive System
The potential for intraluminal contents to cause severe, even lethal, injury to the patient warrants highly specialized and effective cellular and noncellular defense mechanisms against the “tube within the tube.” An increasingly recognized characteristic of individuals who are susceptible to digestive diseases is the degree to which the epithelial lining provides an ineffective barrier and, thus, a “leaky gut.” This occurs in patients with Crohn disease, celiac disease, food allergies, and food intolerance. 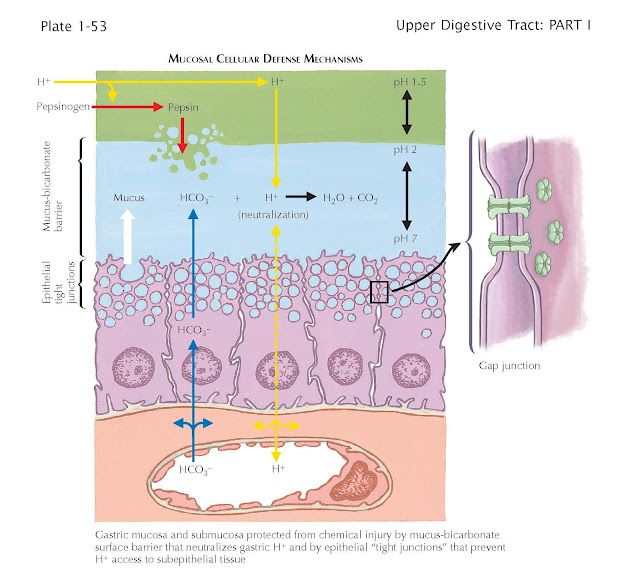 The first line of defense from intraluminal contents is the partial barrier created by the glycocalyx coat secreted by submucosal glands, goblet cells, and epithelial cells throughout the length of the gut. This thick mucoid substance is a complex mixture of mucins, glycoproteins, and trefoil factor like peptides. Its slippery nature serves as a lubricant to reduce the shearing forces produced by contractions and swallowed solids. In the stomach, mucus retards the diffusion of bicarbonate away from the epithelium to create a pH gradient that ranges from 1.0 at the surface of the mucus to a neutral 7.0 at the epithelial cell surface. In the intestine, it serves to retard diffusion of foreign antigens and microorganisms toward the surface while retaining secretory IgA molecules that have been released into the lumen, at the surface. This glycocalyx can also trap antigens within this sticky material to eventually be passed in stool.
The heterogeneous cells lining the gut all share the ability to provide an effective physical barrier that is resistant to invasion of microorganisms and toxins and to diffusion of electrolytes. Intestinal epithelial cells can also influence the immune response by secreting pro- inflammatory mediators, including cytokines, chemokines, and adhesion molecules. They can also process invading microorganisms or absorbed toxins, neutralize them, and then serve as antigen-presenting cells to T cells in the lamina propria’s immune system. Finally, it is important to mention the intricate systems within epithelial cells that are able to recognize when a cell is being overcome by antigen excess, triggering intracellular messengers to produce apoptosis. These dying cells are extruded constantly into the lumen and replaced by new, healthy cells. Interposed between epithelial cells are podocytes of subepithelial dendritic cells, which are highly efficient antigen- presenting cells.
Microorganisms can invade the gut by crossing epithelial cells (transcellular) or by passing between cells in the process of translocation. Key to preventing such invasions are the cell-cell adhesion molecules, particularly tight junctions (zonulae occludentes). Tight junctions are complex yet dynamic structures that selectively control the paracellular movement of antigens and fluid to the underlying intraepithelial lymphocytes and lamina propria. When these gates to the paracellular space’s protective mechanisms are impaired, cells can become damaged. In the upper gastrointestinal tract, medications commonly damage tight junctions, permit- ting back diffusion of acid and submucosal injury that can lead to ulcerations. In the intestine, translocational invasion is partially controlled by intraepithelial lymphocytes.
The ongoing “controlled inflammatory response” associated with the epithelial cell damage, apoptosis, and exfoliation is occurring constantly to maintain an effective biologic shield against its external environment within the tube of the gut. Cell replacement must be common and robust to provide the billions of healthy epithelial cells that coat the gut. When ongoing cellular replacement is impaired, health is threatened. In the esophagus, the nonkeratinized squamous cell epithelium is under the constant influence of shearing forces related to swallowed food and strong esophageal con- tractions as well as the caustic effects of gastroesophageal reflux. The increased rate of cellular replacement in response to injury can be identified by the enlargement of the rete pegs. Mucosal breaks, ulcerations, and bleeding result when this cellular replacement process is overwhelmed. Inadequate replacement of the columnar epithelium of the stomach and intestines occurs commonly in a more wholesale fashion in the setting of hypotension and shock. In shock, the normally robust supply of nutrients and oxygen provided to the gut by its rich vascular supply is diverted to the heart, kidneys, and brain. Under such circumstances, if cells continue to be damaged but are not replaced rapidly enough, the gut’s integrity can be lost. When this occurs in the stomach, diffuse hemorrhagic gastritis may result. In the gut, mesenteric ischemia leads to increased leakiness and translocation; if it is not corrected, it results in the many potentially lethal complications of mesenteric ischemia, including sepsis, bleeding, and, if not corrected, perforation.