Microbiome
Microbiota have long been known to be an unseen, ubiquitous majority teeming on every imaginable surface upon and within the human body. These surfaces include the (1) conjunctiva, (2) skin, (3) respiratory tract, (4) gastrointestinal tract, and (5) genitourethral passages. The approximately 100 trillion bacteria in the human body form 2% to 3% of the average body mass and 55% of the dry feces mass, far outnumbering the 10 trillion human cells. Their aggregate metabolic activity has earned them the collective name of the “forgotten organ.” 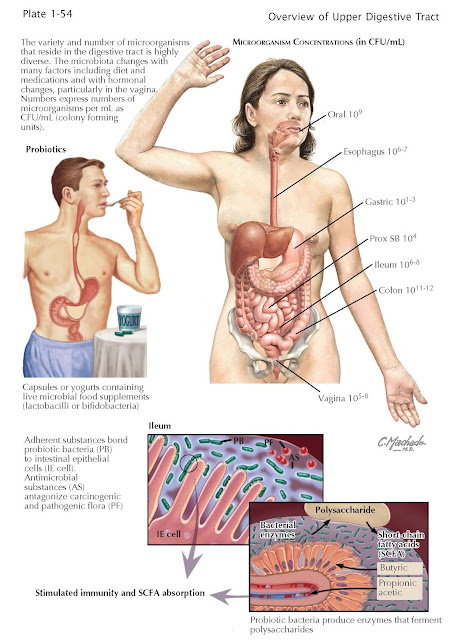 Contrary to popular belief, many bacteria can be cultured, but the cumbersome techniques and long incubation periods needed for culture have previously prohibited the easy identification of bacteria and, in turn, prevented scientific researchers from grasping their clinical significance. The advent of deep 16S RNA sequencing has dramatically enhanced our ability to simultaneously and accurately identify the presence of individual species. Complementing this technology are the budding sciences of metabolomics and proteomics, which aim to interpret the clinical impact of the metabolites and proteins generated by living organisms and tissues. These technologies will reshape our understanding of how microbiota affect human health and disease. Importantly, this commensal community does not consist of bacteria alone but also contains countless fungal and viral agents that cohabitate within an intricate mucosal mosaic. Maintenance of this complex interplay is thought to be critical to maintaining mucosal integrity and overall health. On the one hand, innate immunologic and physiologic mechanisms maintain a healthy community that prevents pathogenic organisms from flourishing. On the other hand, multiple microbiota mechanisms promote mucosal integrity and host health. Mucosal surfaces throughout the body demonstrate convoys of leukocytes regularly deployed for surveil- lance and phagocytosis of microbial offenders. Salivary enzymes contain lysozymes, IgA, and peroxidase, which begin the antimicrobial breakdown. The harsh acidity of gastric secretions is bactericidal. Bile salts serve as detergents and, via micellar formation, envelop organ- isms, inhibiting their direct mucosal binding. Pancreatic enzymes break down elements of bacterial cell walls. And, of course, the migrating motor complex regularly flushes out intestinal segments, preventing stagnancy and bacterial overgrowth.
Indeed, a constant drama of urban microwarfare is unfolding, in which healthy and pathogenic organisms compete for domination and nutritional resources. For instance, some species will compete for mucosal binding sites to prevent more invasive pathogenic bacteria from invading and causing illness. In fact, bacteria are known to secrete lactate, peroxide, and even their own antimicrobial peptides known as bacteriocins, which serve to keep adjacent competitors at bay.
Numerous clinical correlates exist to impress upon medical science how critical these microorganisms are to good health. Initially, a newborn possesses a sterile gut. It is theorized that early luminal exposures between the patient’s innate lymphoid system and consumed nutritional elements, including ingested and inhaled microbiota, will go on to shape the future development of health and/or disease. For instance, newborns born via cesarean section rather than natural vaginal delivery are at increased risk for atopic illnesses such as asthma. Infants who are formula fed rather than breast fed are at increased risk for allergic disorders. Gut bacteria play an important role in vitamin K and biotin synthesis.
They also extract short-chain fatty acids from dietary fiber, specifically butyrate, which promotes colonocyte health. The nonspecific action of antibiotics disturbs the healthy balance of microbes in the colon; this has given rise to epidemics of severe Clostridium difficile infection. Reintroducing healthy donor stool suspensions into an actively infected C. difficile patient reverses this dysbiosis to a healthy balance with a high rate of clinical cure. Also, periodontal science has demonstrated that individuals with tooth and gingival disease are at double the risk for having coronary artery disease versus their counterparts with a healthy mouth. There is also a suggestion that intestinal microbiota may influence psychiatric disease; this has given rise to the development of potential psychobiotics.
Countless studies have provided evidence that the microbiota influence the immune system via direct and indirect mechanisms. Other disease states implicated include rheumatologic disease, metabolic syndromes, obesity, and irritable bowel syndrome. The microbiota represent a new frontier for therapeutic exploration that may allow us to moderate chronic illness via traditional medication a d therapeutic multistrain collections of microbiota.