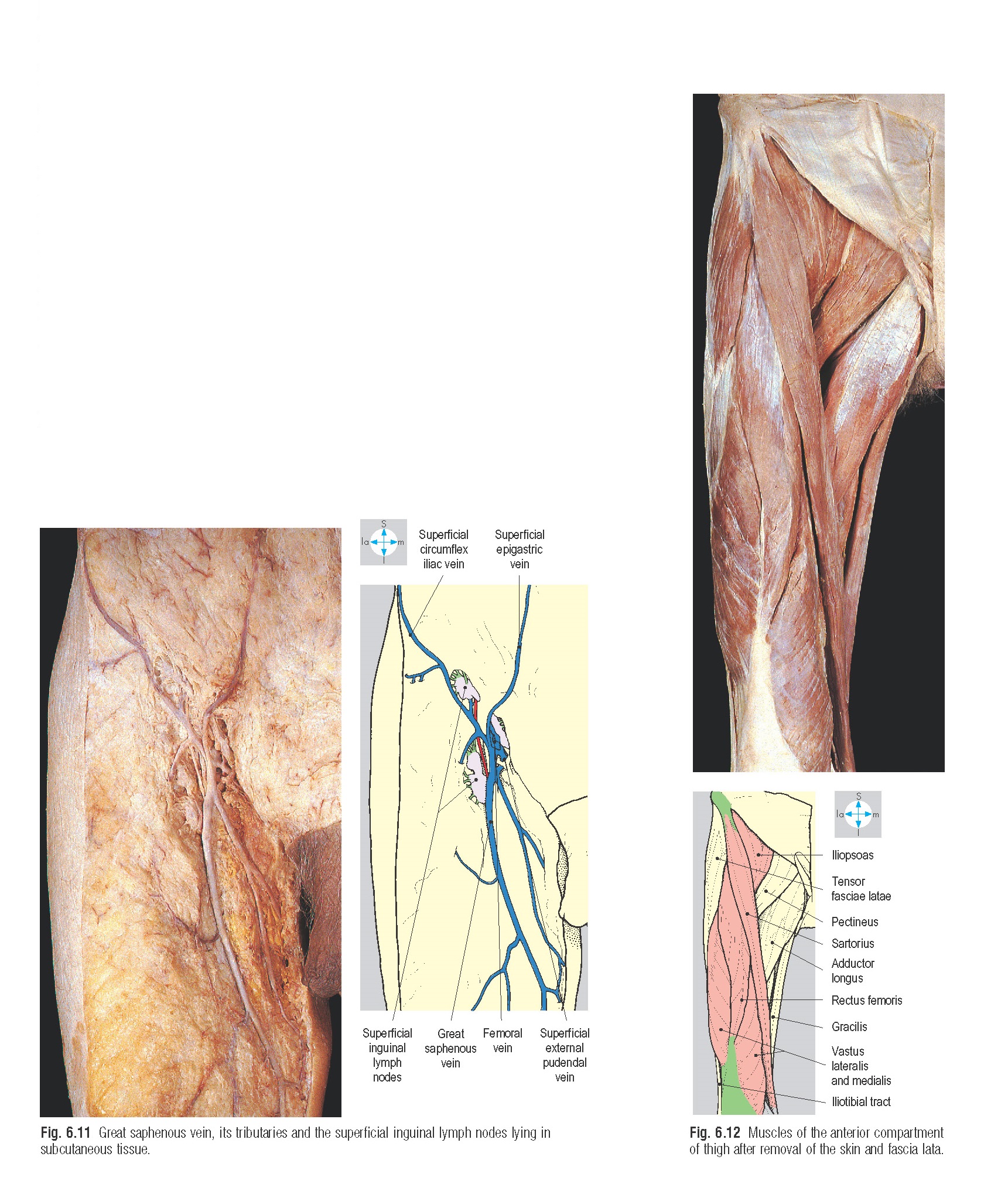 Subcutaneous tissue (superficial fascia)
The subcutaneous tissue contains the great (long) saphenous vein and its tributaries with their accompanying arteries, superficial inguinal lymph nodes and cutaneous nerves. The great saphenous vein ascends on the medial side of the thigh (Fig. 6.11) and passes through the saphenous opening in the fascia lata to empty into the femoral vein. The great saphenous vein drains the superficial tissues of the entire limb except the lateral side of the leg and foot. Near its termination, the vein receives tributaries, which drain the buttock, the perineum and the abdominal wall below the umbilicus. These tributaries are accompanied by corresponding branches of the femoral artery. The superficial inguinal lymph nodes, often palpable in the living, lie just distal and parallel to the inguinal ligament and adjacent to the termination of the great saphenous vein (Fig. 6.11). These nodes receive lymph from the same superficial tissues as those drained by the great saphenous vein and its tributaries. Efferent lymphatics from the superficial nodes pass through the fascia lata and drain into the deep inguinal nodes within the femoral triangle and femoral canal, where nodes are a focal point in lymphatic drainage of the lower limb (p. 257).
The lateral cutaneous nerve of the thigh (L2 & L3) (Fig. 6.17) pierces the inguinal ligament close to the anterior superior iliac spine, where it may become entrapped, causing pain in the thigh (meralgia paraesthetica). It supplies skin as far as the knee. The intermediate and medial cutaneous nerves of the thigh arise from the femoral nerve and supply the anterior and medial surfaces of the thigh. Usually, the obturator nerve gives a cutaneous supply to the medial side of the thigh. The femoral branch of the genitofemoral nerve (L1 & L2) passes beneath the inguinal ligament to supply skin over the femoral triangle, and the ilioinguinal nerve emerges through the superficial inguinal ring to supply the adjacent medial aspect of the thigh.

Fascia lata
The fascia lata (deep fascia) completely invests the thigh, providing attachment for muscles and associated intermuscular septa in the anterior compartment. It attaches superiorly to the inguinal ligament and iliac crest, and inferiorly is continuous with the deep fascia of the leg. Below and lateral to the pubic tubercle is the saphenous opening, which transmits the terminal part of the long saphenous vein.
Over the lateral aspect of the thigh, the fascia lata is particularly thick, forming the iliotibial tract. Gluteus maximus and tensor fasciae latae are attached to its upper part (Fig. 6.30).
Fig. 6.13 Quadriceps femoris. Vastus intermedius is partially revealed by removal of rectus femoris. Pectineus and adductors longus and brevis have been excised.

Muscles
Quadriceps femoris
The four parts of quadriceps femoris, namely rectus femoris, vastus lateralis, vastus intermedius and vastus medialis, cover the front and sides of the femur (Figs 6.12, 6.13 & 6.14). Rectus femoris is attached by a straight head to the anterior inferior iliac spine and by a reflected head to the ilium above the acetabulum.
Vastus lateralis attaches to the intertrochanteric line, the lateral lip of the linea aspera and the lateral supracondylar ridge of the femur (Figs 6.15 & 6.16). Vastus intermedius attaches to the upper two thirds of the anterior and lateral surfaces of the femoral shaft, while vastus medialis anchors to the spiral line and medial lip of the linea aspera. Distally, these four muscles form a common tendon, which attaches to the upper border (base) of the patella. From the lower border (apex) of the patella, the tendon continues as the patellar ligament (Fig. 6.75) to attach to the tibial tubercle.
Quadriceps femoris is a powerful antigravity muscle, extending the knee joint during standing, walking and running. In addition, rectus femoris flexes the hip. The lower fibres of vastus medialis stabilize the position of the patella (p. 300). Quadriceps femoris is supplied by branches of the femoral nerve.
Sartorius
This strap­like muscle is attached proximally to the anterior superior iliac spine and descends obliquely across the thigh (Fig. 6.12), crosses the posteromedial side of the knee and, with gracilis and semitendinosus, attaches to the upper end of the subcutaneous surface of the tibia (Fig. 6.79). Sartorius flexes and laterally rotates the hip and flexes the knee. It is supplied by the femoral nerve. 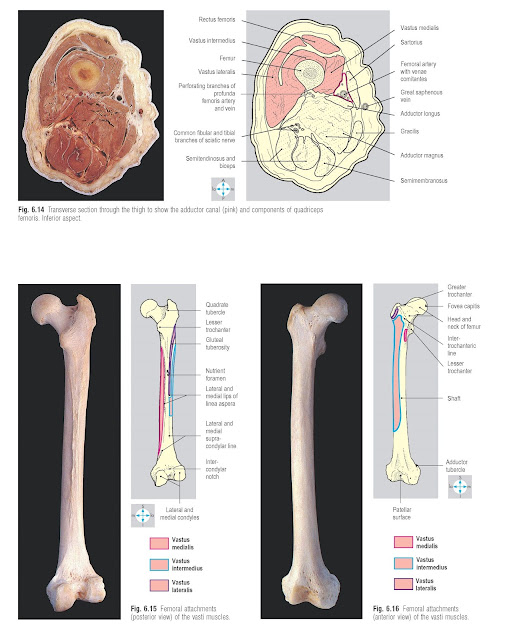 Femoral triangle
The femoral triangle occupies the upper medial part of the anterior compartment of the thigh. Its upper boundary is the inguinal ligament; its lateral limit is the medial border of sartorius and its medial boundary is the medial border of adductor longus (some authors use the lateral border in their definition). The roof is fascia lata and the floor comprises iliopsoas, pectineus and adductor longus (Fig. 6.17). The triangle contains the femoral vessels and nerve, and the deep inguinal lymph nodes.

Adductor (subsartorial) canal
This canal is an intermuscular space linking the femoral triangle with the popliteal fossa. Triangular in cross­section, it lies beneath sartorius, occupying the groove between vastus medialis and adductor longus, and at its lower end adductor magnus (Fig. 6.14). Through the canal run the femoral artery and vein and nerve to vastus medialis and the saphenous nerve (Fig. 6.18).


Fig. 6.17 Boundaries and floor of the femoral triangle.

Femoral nerve
The femoral nerve (L2, L3 & L4) enters the thigh beneath the inguinal ligament, lying on iliopsoas lateral to the femoral sheath (Fig. 6.19). After a brief course in the femoral triangle, it divides into several superficial and deep branches. The superficial branches are the intermediate and medial cutaneous nerves of the thigh and the nerves to sartorius and pectineus. The deep branches include the nerves supplying rectus femoris and the vasti, and the saphenous nerve, which enters the adductor canal. 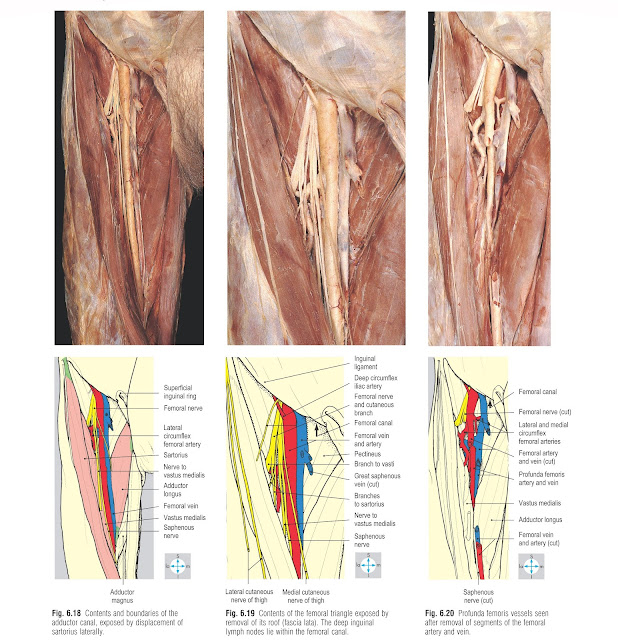