Deltoid Anatomy
Deltoid is a large multipennate muscle responsible for the rounded contour of the shoulder region (Fig. 3.10). The muscle overlies the shoulder joint and the attachments of the short scapular muscles to the upper end of the humerus (Fig. 3.11). Proximally, it has a continuous attachment to the lateral third of the clavicle and to the acromion and spine of the scapula.
The distal attachment is to a roughened area, the deltoid tuberosity, midway down the lateral surface of the shaft of the humerus (Fig. 3.23). Deltoid acts only on the shoulder joint, where it is the main abductor. During this movement, produced by the acromial fibres, the joint is stabilized by the clavicular fibres and those from the scapular spine. Acting alone, the anterior fibres produce flexion, whereas the posterior fibres extend the shoulder joint. Deltoid is supplied by the axillary nerve, a terminal branch of the posterior cord of the brachial plexus. 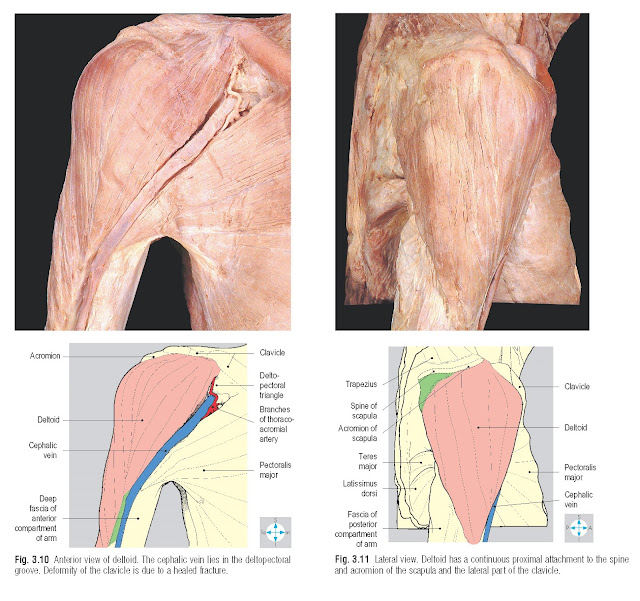 Axillary nerve
The axillary nerve leaves the axilla through the quadrangular space (Fig. 3.64) accompanied by the posterior circumflex humeral artery. In its course, the nerve is closely related to the surgical neck of the humerus and to the capsule of the shoulder joint. It supplies deltoid and teres minor, the shoulder joint and skin overlying the lower part of deltoid. Damage to the nerve may occur during dislocation of the shoulder joint, resulting in weakness of abduction, impaired sensation and, subsequently, in loss of the normal contour of the shoulder as the deltoid muscle becomes wasted.

Related Posts
UpperLimb
Home
Give us your opinion