Fig. 2.32 Borders and valves of the heart and their relationships to the anterior chest wall.


Fig. 2.34 Inferior surface of the heart. The inferior part of the fibrous pericardium has been removed with the diaphragm.


Fig. 2.35 The posterior surface of the heart showing the reflection of the serous pericardium and the site of the oblique pericardial sinus.


Chambers and valves
The cavities of the right and left atria are continuous with those of their respective ventricles through the atrioventricular orifices. Each orifice possesses an atrioventricular valve, which prevents backflow of blood from the ventricle into the atrium. The myocardium of the atria is separated from that of the ventricles by connective tissue, which forms a complete fibrous ring around each atrioventricular orifice. Interatrial and interventricular septa separate the cavities of the atria and ventricles. Valves, each with three semilunar cusps, guard the orifices between the right ventricle and pulmonary trunk (pulmonary valve) and the left ventricle and ascending aorta (aortic valve). All these valves close passively in response to differential pressure gradients.
Right atrium
The right atrium receives blood from the superior and inferior venae cavae and from the coronary sinus and cardiac veins, which drain the myocardium. The superior vena cava enters the upper part of the chamber. Adjacent to its termination is a broad triangular prolongation of the atrium, the auricle (atrial appendage), which overlaps the ascending aorta (Fig. 2.36).


Fig. 2.36 Interior of the right atrium and auricle, exposed by reflection and excision of part of the anterior atrial wall.


Internally, the anterior wall of the  right atrium possesses a vertical ridge, the crista terminalis (Fig. 2.36). From the crista, muscular ridges (musculi pectinati) run to the left and extend into the auricle. The posterior (septal) wall is relatively smooth but possesses a well-defined ridge surrounding a shallow depression named the fossa ovalis. This fossa is the site of the foramen ovale, which, in the fetus, allows blood to pass directly from the right to the left atrium. The coronary sinus empties into the chamber close to the atrioventricular orifice. Inferiorly, the right atrium receives the inferior vena cava immediately after the vessel has pierced the central tendon of the diaphragm. A fold called the valve of the inferior vena cava (Fig. 2.36) projects into the chamber and is the remnant of a fetal structure that directed the flow of blood across the right atrium towards the foramen ovale.
Tricuspid valve
From the right atrium, blood flows into the right ventricle through the right atrioventricular orifice, which is guarded by the tricuspid valve (Fig. 2.37). The valve possesses three cusps, the bases of which attach to the margins of the atrioventricular orifice, while their free borders project into the cavity of the right ventricle (Fig. 2.38), where they are anchored by fibrous strands (chordae tendineae) to the papillary muscles of the ventricle. During ventricular contraction (systole), the papillary muscles pull on the chordae, preventing eversion of the valve cusps and reflux of blood into the atrium. The valve lies in the midline behind the lower part of the body of the sternum (Fig. 2.32) and its sounds are heard best by auscultation over the xiphisternum.


Fig. 2.37 Tricuspid valve, revealed after removal of the lateral wall of the right atrium.


Right ventricle
The right ventricle has the right atrium on its right and the left ventricle both behind and to its left. The chamber forms parts of the anterior and inferior surfaces of the heart and narrows superiorly at the infundibulum, which leads into the pulmonary trunk (Fig. 2.38). The walls of the right ventricle are thicker than those of the right atrium and internally possess numerous muscular ridges called trabeculae carneae (Fig. 2.43). One of these, the moderator band (Fig. 2.54), often bridges the cavity of the chamber, connecting the interventricular septum to the anterior ventricular wall. When present, it carries the right branch of the atrioventricular bundle of conducting tissue (p. 56). Projecting from the ventricular walls into the interior of the chamber are processes of myocardium, the papillary muscles, each attached at its apex to several chordae tendineae. The right ventricle is separated from the left ventricle by the interventricular septum, which is muscular inferiorly and membranous superiorly (Figs 2.43 & 2.46).
Pulmonary valve
The pulmonary orifice lies between the infundibulum and the pulmonary trunk and is guarded by the pulmonary valve (Figs 2.39 & 2.40), which consists of three semilunar cusps. The valve closes during ventricular relaxation (diastole), preventing backflow of blood from the pulmonary trunk into the right ventricle. The valve lies behind the left border of the sternum at the level of the third costal cartilage (Fig. 2.32). Sounds generated by this valve are loudest over the anterior end of the second left intercostal space.


Left atrium
The left atrium lies behind the right atrium and forms the base of the heart. It possesses a hook-like auricle (left atrial appendage), which projects forwards to the left of the pulmonary trunk and infundibulum. The chamber receives superior and inferior pulmonary veins from each lung (Fig. 2.35). The four pulmonary veins, together with the two venae cavae, are all enclosed in a sleeve of serous pericardium, forming the superior limit of the oblique pericardial sinus. The left atrium forms the anterior wall of this sinus, which separates the chamber from the fibrous pericardium and oesophagus. Most of the inner surface of the left atrium is smooth (Fig. 2.41), although musculi pectinati are present in the auricle. 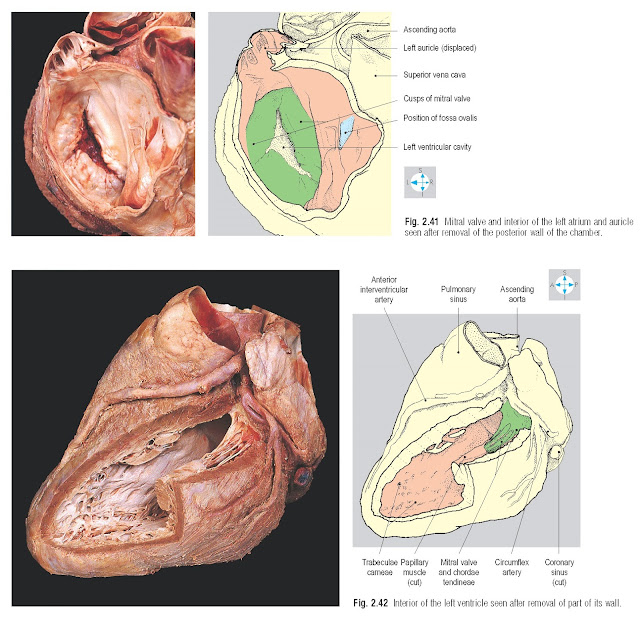 Mitral (bicuspid) valve
The left atrium communicates anteroinferiorly with the left ventricle through the left atrioventricular orifice, which is guarded by the mitral valve. This valve possesses two cusps, whose bases attach to the margins of the atrioventricular orifice (Fig. 2.41), while their free borders and cusps are anchored by chordae tendineae to the papillary muscles within the left ventricle (Fig. 2.42). The valve prevents reflux during ventricular contraction. Although it lies in the midline at the level of the fourth costal cartilages (Fig. 2.32), the sounds of the mitral valve are best heard over the apex of the heart.
Left ventricle
From the left atrioventricular orifice, the left ventricle extends forwards and to the left as far as the apex. The thickness of the wall of the chamber is normally three times that of the right ventricle (Fig. 2.43). Internally, there are prominent trabeculae carneae and papillary muscles (Fig. 2.46). The chamber narrows as it passes upwards and to the right behind the infundibulum to form the aortic vestibule (Fig. 2.44), the part of the ventricle that communicates with the ascending aorta through the aortic orifice. 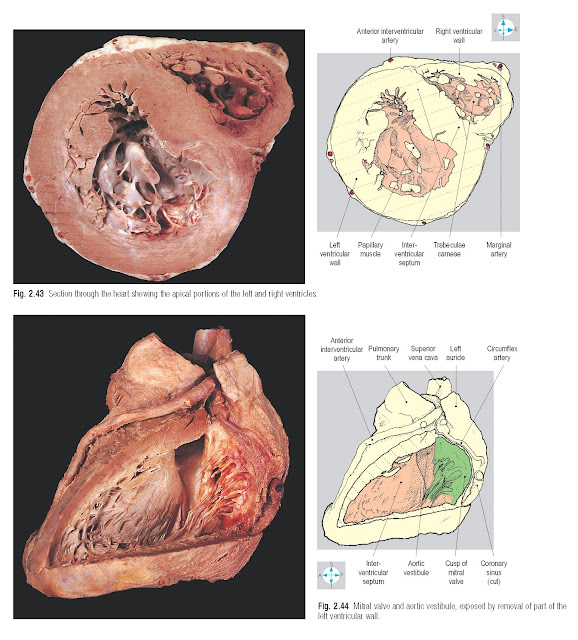 Aortic valve
The aortic valve consists of three semilunar cusps (Fig. 2.45), which prevent backflow of blood from the ascending aorta during ventricular diastole. The valve lies behind the sternum to the left of the midline at the level of the anterior end of the third left intercostal space (Fig. 2.32). However, its sounds are best heard over the medial ends of the first and second right intercostal spaces.
Pulmonary trunk and ascending aorta
The pulmonary trunk and the ascending aorta lie within the fibrous pericardium, enclosed together in a sleeve of serous pericardium anterior to the transverse pericardial sinus (Fig. 2.40). The pulmonary trunk extends upwards and backwards, while the ascending aorta initially lies behind it and passes upwards and forwards, overlapped by the right auricle. At the origin of each vessel are three dilatations or sinuses (Figs 2.39 & 2.45), one immediately above each of the cusps of the pulmonary and aortic valves. When ventricular contraction ceases, blood flows into the sinuses, thus pushing against the cusps and closing the valves. Two of the aortic sinuses give rise to the right and left coronary arteries.
The pulmonary trunk emerges from the pericardium and divides into right and left pulmonary arteries in the concavity of the aortic arch, anterior to the bifurcation of the trachea at the level of the fourth thoracic vertebra. As the ascending aorta pierces the fibrous pericardium, it turns backwards and to the left, becoming the arch of the aorta.
Connecting the aortic arch to the pulmonary trunk (or to the commencement of the left pulmonary artery) is the ligamentum arteriosum (Fig. 2.46), the remnant of the fetal ductus arteriosus which conveyed blood from the pulmonary trunk to the aorta, bypassing the pulmonary circulation. Occasionally, the ductus remains patent after birth, giving rise to serious circulatory abnormalities. 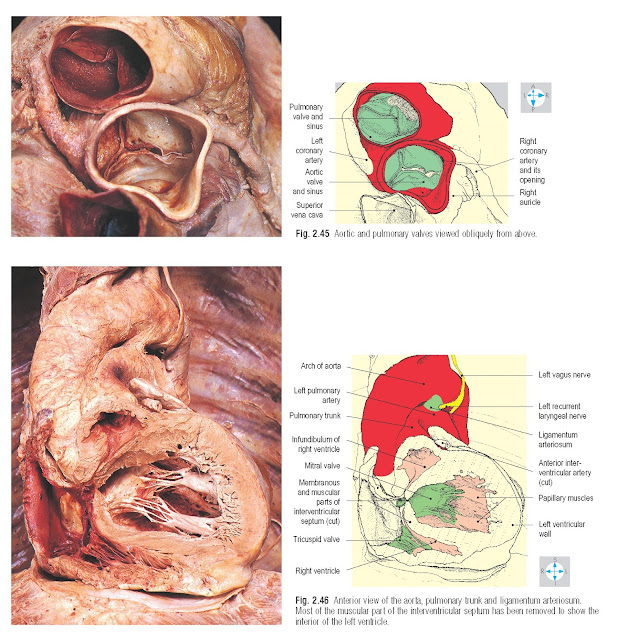 Blood vessels
The arterial supply to the heart is provided by the right and left coronary arteries, which arise from the ascending aorta just above the aortic valve (Fig. 2.47). They supply the myocardium, including the papillary muscles and conducting tissue. The principal venous return is via the coronary sinus and the cardiac veins. 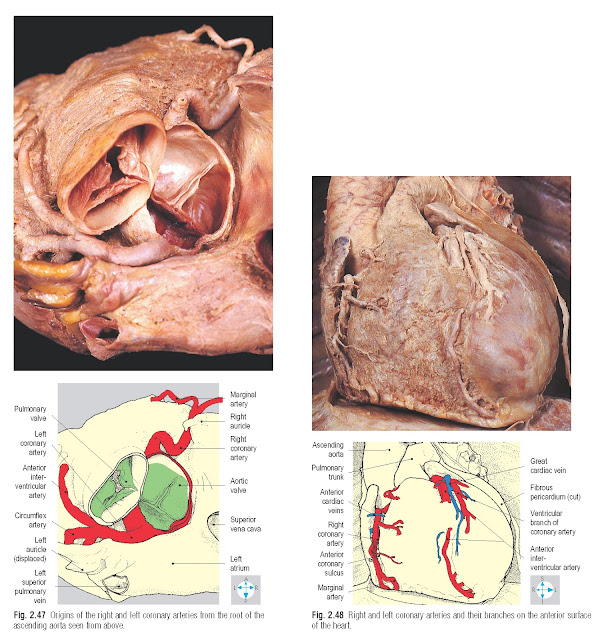