Gluteal Compartment Anatomy
The gluteal region or buttock forms part of the root of the limb. It overlies the dorsum of the ilium, ischium and sacrum and is continuous proximally with the lower trunk and distally with the posterior compartment of the thigh. Three substantial muscles (gluteus maximus, medius and minimus), covered by deep fascia and a thick layer of subcutaneous fat, form the bulk of the buttock and account for its surface contour. The gluteal fold, a prominent surface feature, lies at the junction of the buttock and thigh. 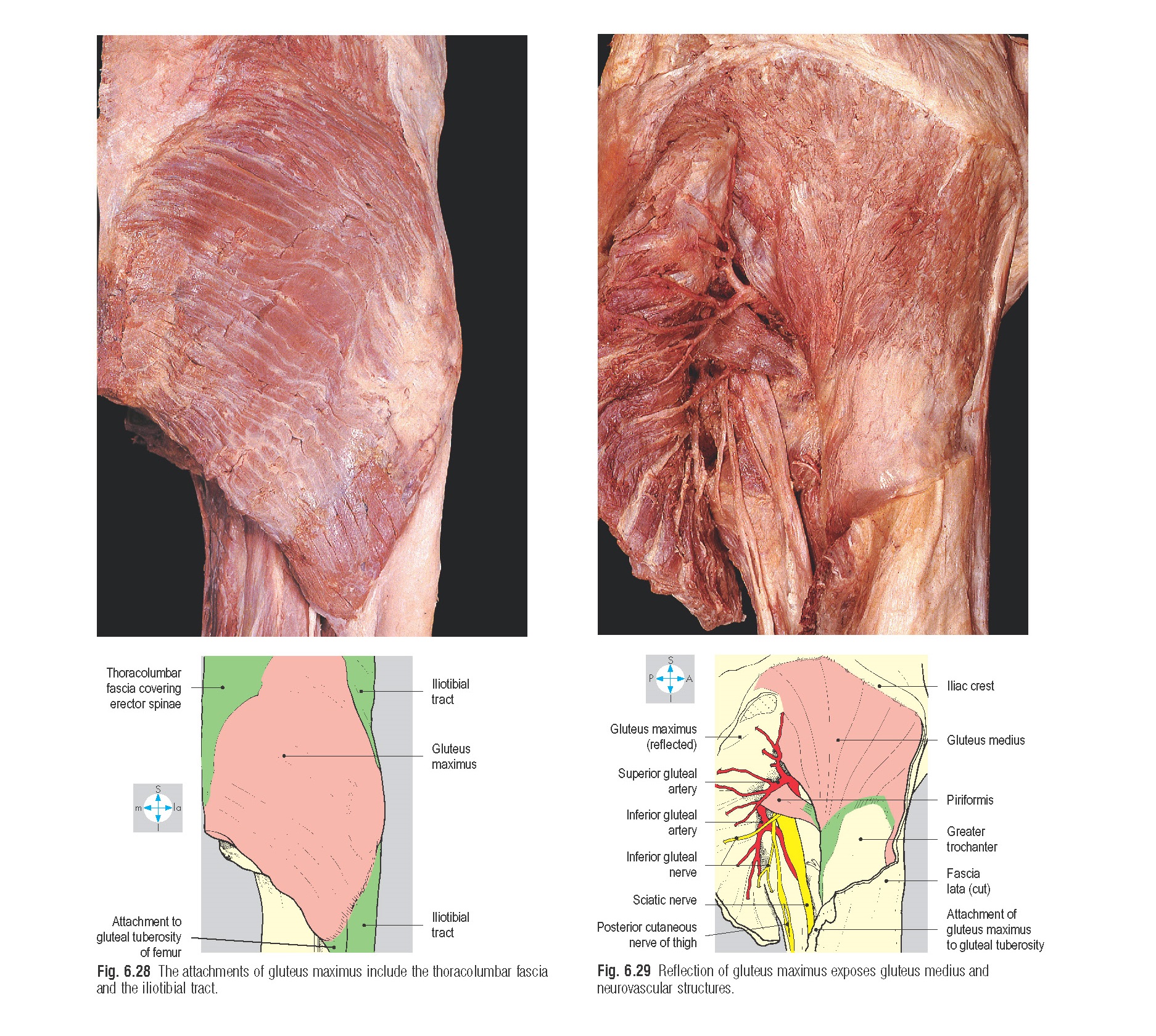 Gluteus maximus
This very large trapezoidal muscle is the most superficial in the buttock. Its fibres slope downwards and laterally (Fig. 6.28) and its lower edge passes obliquely across the gluteal fold. Some of the sensory nerves to the skin of the buttock penetrate the medial part of the muscle, while others emerge around its upper and lower borders. Proximally, the muscle has an extensive attachment: to the ilium behind the posterior gluteal line, to the lower part of the sacrum, to the coccyx, to the sacrotuberous ligament and to the thoracolumbar (lumbar) and gluteal fasciae. A synovial bursa is usually present where it crosses the ischial tuberosity. Distally, some of the deeper fibres are attached to the gluteal tuberosity of the femur (Fig. 6.29), but most of the muscle is attached through the iliotibial tract (Fig. 6.30) to the anterior surface of the lateral tibial condyle. The nerve supply is from the inferior gluteal nerve (L5, S1 & S2). 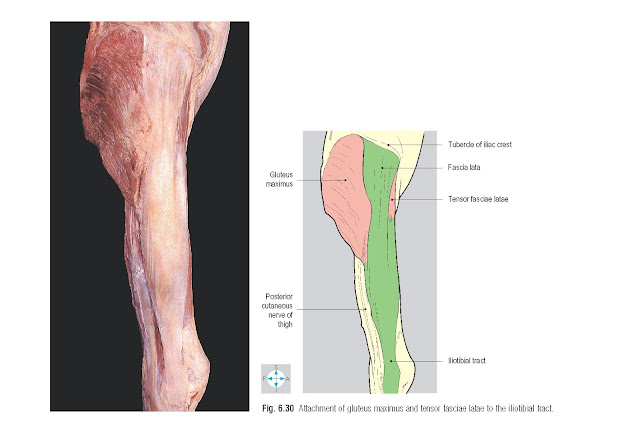 Gluteus maximus is a strong extensor of the thigh, especially during running and climbing, and also produces abduction at the hip joint. As an antigravity muscle, it extends the trunk on the hip, and through the iliotibial tract, it extends and stabilizes the knee joint and the supporting limb during walking and standing.

Tensor fasciae latae
This small muscle is attached proximally to the ilium between the anterior superior iliac spine and iliac tubercle (Fig. 6.31) and distally to the anterior border of the iliotibial tract (Fig. 6.30), which it tenses. It is supplied by the superior gluteal nerve. 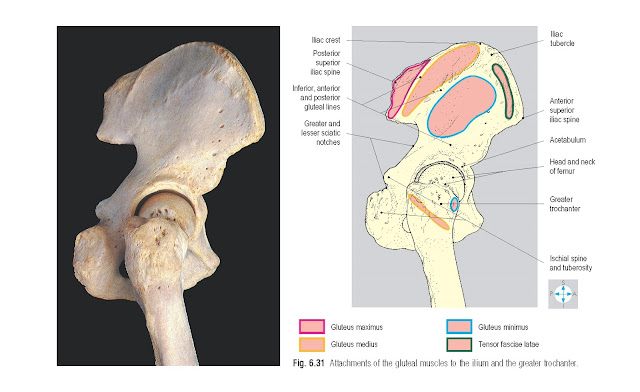 Structures deep to gluteus maximus
The arrangement of these structures is clarified by noting whether they enter the buttock above or below the piriformis muscle (Fig. 6.29), which itself enters via the greater sciatic foramen (Fig. 6.36).
Structures entering above piriformis
The superior gluteal nerve (L4, L5 & S1) arises within the pelvis from the lumbosacral plexus and enters the buttock through the greater sciatic foramen (Fig. 6.36), running laterally between gluteus medius and gluteus minimus (Fig. 6.32). It supplies both muscles and terminates in tensor fasciae latae.
The superior gluteal artery arises from the posterior aspect of the internal iliac artery. It enters the buttock accompanying the corresponding nerve and divides into a superficial branch, which supplies the overlying gluteus maximus (Fig. 6.29) and two deep branches, an upper and lower, which supply gluteus medius and minimus (Fig. 6.32). The deep branches also contribute to anastomoses around the greater trochanter and anterior superior iliac spine. The accompanying veins form an extensive plexus between the muscles and drain into the internal iliac vein.
Gluteus medius and minimus
These fan­shaped muscles lie superior to piriformis. Gluteus medius (Fig. 6.29) is attached proximally to the dorsum of the ilium between the posterior and anterior (middle) gluteal lines and to the gluteal fascia, which separates it from gluteus maximus. Distally, it is attached to the lateral surface of the greater trochanter. Gluteus minimus lies immediately deep to gluteus medius and attaches proximally to the dorsum of the ilium between the anterior and inferior gluteal lines (Fig. 6.31) and distally to the anterior surface of the greater trochanter (Fig. 6.32). Both are supplied by the superior gluteal nerve.
Although both gluteus medius and minimus medially rotate the femur at the hip joint, their importance is in abduction. During walking, gluteus medius and minimus of the supporting limb contract, pulling on the pelvis from their femoral attachments to prevent tilting of the pelvis towards the unsupported side. Failure of this mechanism is the basis of Trendelenburg’s sign of hip instability with a dipping gait. It may result from a defective acetabulum (usually congenital) or loss of function in these muscles.
Structures entering below piriformis
These are: three nerves laterally, the sciatic nerve, nerve to quad­ ratus femoris and posterior cutaneous nerve of thigh; medially the internal pudendal artery, pudendal nerve and nerve to obturator internus; and in intermediate position, the inferior gluteal nerve and vessels.
The sciatic nerve (Fig. 6.33), the largest nerve in the lower limb, arises from the spinal nerves L4, L5, S1, S2 and S3 and supplies the entire limb, except for the gluteal structures and the medial and anterior compartments of the thigh. It leaves the greater sciatic foramen about halfway between the posterior superior iliac spine and ischial tuberosity and curves laterally and downwards, crossing the midpoint between the ischial tuberosity and greater trochanter. Its location must be remembered to avoid damaging the nerve when making intramuscular injections into the buttock. The nerve is separated from the capsule of the hip joint by obtura­ tor internus and the gemelli, quadratus femoris and the upper border of adductor magnus (Fig. 6.33). A branch of the inferior gluteal artery accompanies the nerve.
The nerve to quadratus femoris (L4, L5 & S1) lies deep to the sciatic nerve, obturator internus and the gemelli and supplies the inferior gemellus, quadratus femoris and the hip joint.
Superficial and medial to the sciatic nerve is the posterior cutaneous nerve of the thigh (Fig. 6.33), which arises from spinal nerves S1, S2 and S3. Within the buttock, its perineal branch runs forwards to supply the skin on the posterior part of the scrotum or labium majus. Other branches curl round the lower border of gluteus maximus to supply the skin over the buttock.
The inferior gluteal nerve and vessels occupy an intermediate position. The nerve turns immediately posteriorly to supply gluteus maximus.
The inferior gluteal artery, a branch of the internal iliac artery, accompanies the nerve and supplies gluteus maximus (Fig. 6.29) and the short lateral rotators of the hip joint and contributes to the trochanteric and cruciate anastomoses. Venae comitantes accompany the artery and drain into the internal iliac system.
The pudendal nerve (S2, S3 & S4), internal pudendal vessels, and nerve to obturator internus (L5, S1 & S2), also supplying the superior gemellus, enter beneath the medial part of piriformis (Fig. 6.33). Their course in the buttock is brief before turning for­ wards into the lesser sciatic foramen, crossing the sacrospinous ligament or ischial spine to enter the pudendal canal (Fig. 6.36 and p. 243).


Fig. 6.32 Reflection of gluteus medius reveals gluteus minimus and the superior gluteal artery and nerve entering the buttock above piriformis.


Short muscles of the buttock
The short muscles of the buttock are, from above downwards, piriformis, obturator internus with the gemelli, and quadratus femoris (Fig. 6.33). Piriformis arises from the ventral surface of the sacrum  (p.  235)  and  runs  laterally  through  the  greater  sciatic foramen to converge on the medial border of the greater trochanter. It is innervated within the pelvis by spinal nerves L5, S1 and S2. Obturator internus attaches to the lateral wall of the pelvic cavity (Fig. 6.72), including the obturator membrane, and runs backwards towards the lesser sciatic foramen, where its tendon makes a right­angled turn to run laterally across the buttock to the medial aspect of the greater trochanter above the trochanteric fossa. The superior and inferior gemelli are small muscles arising from the upper and lower margins of the lesser sciatic notch to fuse with the obturator internus tendon.
Quadratus femoris attaches to the lateral margin of the ischial tuberosity and to the quadrate tubercle of the femur and the subjacent shaft. Being behind the hip joint, all the short muscles later­ ally rotate the hip.


Fig. 6.33 Structures emerging below piriformis and the course and relations of the sciatic nerve.


Cruciate arterial anastomosis
The cruciate anastomosis lies at the lower border of quadratus femoris and receives contributions from above, the inferior gluteal artery; below, the first perforating artery; and on each side, the medial and lateral circumflex femoral arteries.