Serum calcium is tightly regulated and is predominantly under the control of vitamin D and parathyroid hormone (PTH). The normal range is 2.2–2.6 mmol/L. It is important to understand the physiology of calcium metabolism to interpret abnormalities of serum calcium, vitamin D, phosphate and PTH in disease. 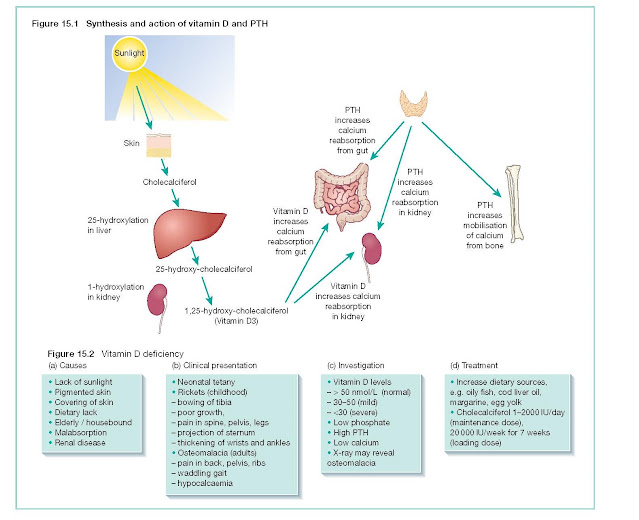 PTH is a peptide hormone secreted by the four parathyroid glands, situated behind the thyroid. Because of their embryological origin, the parathyroids may be in an ectopic position such as in the thymus within the chest. PTH increases calcium absorption from the gut and kidney, and increases renal phosphate loss (Figure 15.1). High PTH levels are associated with low phosphate, and vice versa. Calcium-sensing receptors (Ca-SR) are situated on parathyroid and renal cell membranes. Hypocalcaemia increases PTH secretion, while hypercalcaemia suppresses PTH secretion via stimulation and inhibition of the Ca-SR, respectively. PTH increases osteoclastic bone resorption and synthesis of vitamin D (Figure 15.1).

Vitamin D is synthesised by the skin in response to sunlight. Its chemical structure is similar to that of a steroid hormone, acting on nuclear receptors. Cholecalciferol, the precursor to vitamin D, undergoes 1-hydroxylation in the liver, and 25-hydroxylation in the kidney to produce active 1-25 di-hydroxy-cholecalciferol (Figure 15.1). The native form of vitamin D is vitamin D3. Vitamin D2 is derived synthetically from fungi and is less potent than D3. The action of vitamin D is to increase absorption of calcium in the gut and kidney, both directly and in concert with PTH.

Vitamin D deficiency is very common in clinical practice. Risk factors include lack of sunlight, pigmented skin, religious covering of skin and dietary deficiency (Figure 15.2a). Elderly and housebound patients are particularly at risk, as are patients with chronic kidney disease or malabsorption. In the UK, there is only sufficient sunlight between May and September to produce adequate vitamin D. Dietary sources include oily fish, cod liver oil, margarine and egg yolk. Pregnancy is a major drain on vitamin D so it is important for young women in at risk groups to replenish vitamin D levels prior to conception.

The clinical manifestations depend on whether presentation is in childhood or adulthood (Figure 15.2b).

The earliest clinical manifestation of vitamin D deficiency is neonatal hypocalcaemia. This can develop with neonatal tetany and seizures, and is a paediatric emergency requiring immediate correction with intravenous calcium. When the child becomes a toddler and stands up, bowing of the tibia can occur, which is a classic sign of rickets.

Management includes reversal of risk factors, increased dietary intake, correction of hypocalcaemia and vitamin D replacement Figure 15.2. The treatment aim is to replenish vitamin D to >50 nmol/L and improve symptoms. The maintenance replacement dose is 1000–2000 IU/day cholecalciferol. In profound vitamin D deficiency, 20 000 IU/week may be given for 7 weeks as a loading dose. Vitamin D toxicity is rare and it is not necessary to repeat serum vitamin D levels. Calcium should be re-checked several months after starting treatment as replacement can unmask primary hyperparathyroidism. There is a key role for healthcare professionals in educating at risk grups to reverse the increasing prevalence of severe vitamin D deficiency.