Mucosal Immunity
The other “outer” surface of the body is the mucosa. Most pathogens enter the body through mucosal surfaces, following ingestion, inhalation, or sexual transmission. The gastrointestinal, respiratory, and genitourinary tracts (Figure 6.4) are therefore heavily guarded by cells of the immune system present in the highly vascularized lamina propria (connective tissue) which lies beneath the epithelial cells (Figure 6.5). There are diffuse collections of T‐ and B‐lymphocytes (Figure 6.5a) as well as antibody‐secreting plasma cells (Figure 6.5b) and phagocytes. Additionally many of the lymphocytes are organized into mucosa‐associated lymphoid tissue (MALT) with well‐formed follicles. In humans, the MALT includes the lingual, palatine, and pharyngeal tonsils, the Peyer’s patches of the small intestine (Figure 6.5c), and the appendix. 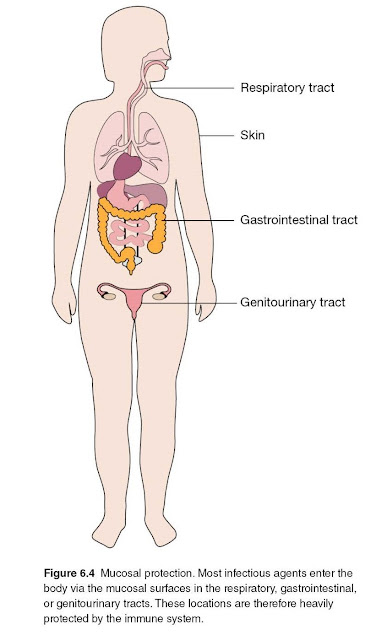 Gut‐associated lymphoid tissue is separated from the lumen of the intestine by columnar epithelium with tight junctions and a mucous layer. This epithelium is interspersed with micro­ fold (M)‐cells (Figure 6.5d and Figure 6.6). These are specialized antigen‐transporting cells with short, irregular microvillae on their apical surface. They endocytose antigens that are then carried to the basal surface where they are exocytosed for the subsequent attention of lymphocytes, dendritic cells, and macrophages (Figure 6.6b,c). Collectively, the cells and tissues involved in mucosal immunity form an interconnected system within which lymphocytes may circulate (Figure 6.7). 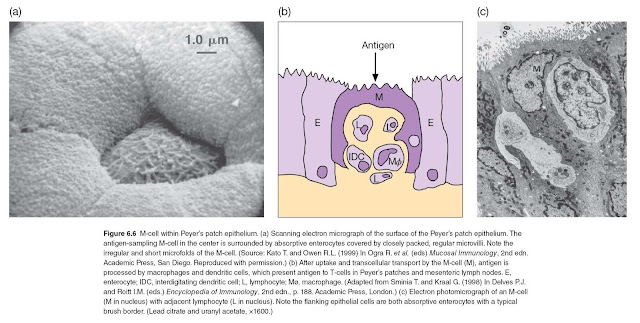 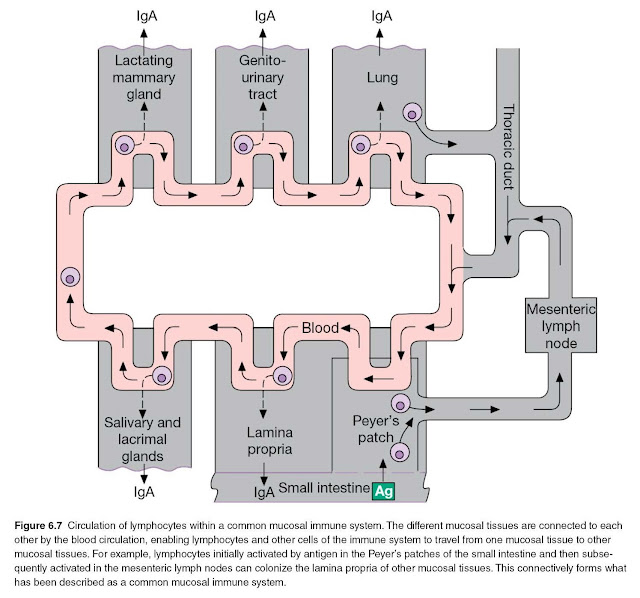 Peyer’s patches form the site for induction of immune responses in the gut
Foreign material, including bacteria, is taken up by M‐cells and passed on to the underlying Peyer’s patch APCs, which then activate the appropriate lymphocytes. Thus, the Peyer’s patches constitute the inductive site for the initiation of gut immune responses. After their activation is induced, the lymphocytes travel via the lymph to the mesenteric lymph nodes where additional activation and proliferation may occur. A special feature of APCs from Peyer’s patches, mesenteric lymph nodes, and the lamina propria is that they contain a population of CD103+ dendritic cells that express retinal dehydrogenase enzymes which convert vitamin A to retinoic acid. Why is this relevant? Well, because it turns out that stimulation through lymphocyte retinoic acid receptors (RARs) induces T‐cells to upregulate both the LPAM‐1 (α4β7) integrin and the CCR9 gut homing receptors, as well as enhancing the differentiation of Foxp3+ regulatory T‐cells and favoring the generation of IgA‐producing B‐cells. The “imprinted” T‐lymphocytes then move via the thoracic duct into the bloodstream and finally on to the lamina propria of the gut (Figure 6.7). In this responsive site the activated T‐cells assist the IgA‐forming B‐cells and plasma cells that, because they are now broadly distributed, protect a wide area of the gut with antibody. Thus, superimposed upon a common mucosal immune system, lymphocytes can be directed to particular mucosal locations. 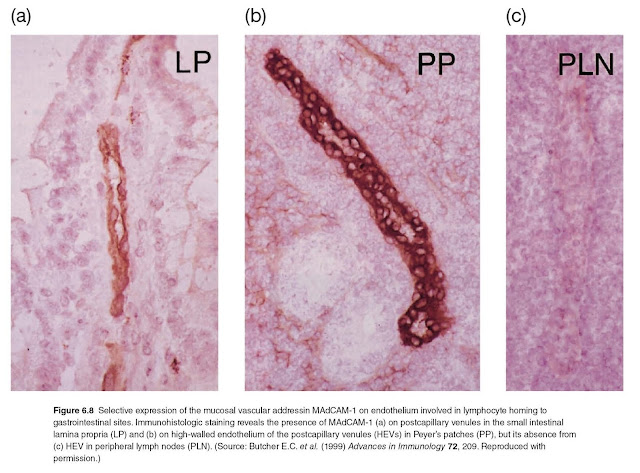 Intestinal lymphocytes
The LPAM‐1 (α4β7) integrin ligand MAdCAM‐1 is present on the intestinal lamina propria postcapillary venules (Figure 6.8) and thus facilitates the arrival of the LPAM‐1+ intestinal T‐cells. These cells bear a phenotype roughly comparable to that of peripheral blood lymphocytes namely >95% T‐cell receptor (TCR) αβ and a CD4:CD8 ratio of 7:3 and seem to mainly be activated or memory cells. Unwarranted immune responses in the gut may be dampened down following the secretion of IL‐10 and transforming growth factor β (TGFβ) by inducible regulatory T‐cells. Within the lamina propria there is also a generous sprinkling of activated B‐cells and of plasma cells secreting IgA for transport by the poly‐Ig receptor to the intestinal lumen (see Figure 6.5b).
Intestinal intraepithelial lymphocytes (IELs) are a distinctly different population. Both they and intraepithelial dendritic cells express high levels of the αEβ7‐integrin, which binds E‐cadherin on the intestinal epithelial cells, thereby localizing the IELs between the epithelial cells (Figure 6.9). They are mostly T‐cells, about 10% of which in humans bear a γδ TCR. In other species, including mice, γδ T‐cells can represent up to 60% of the IEL T‐cells. 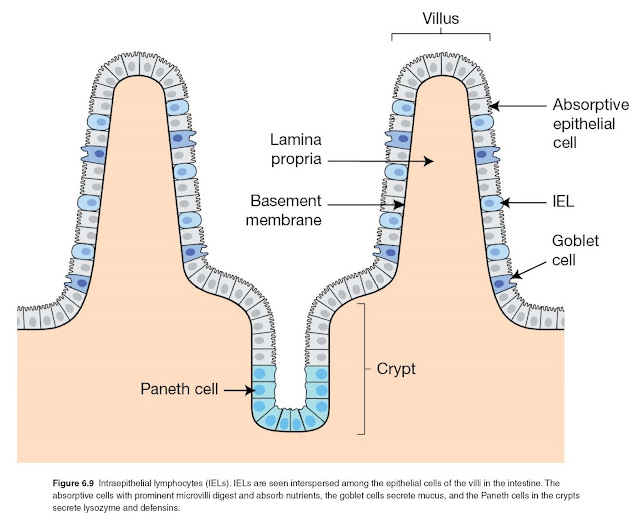 Of those bearing an αβ TCR, most IELs are CD8+ positive and in mice can be divided into two populations. One‐third of them possess the conventional form of CD8, which is a heter­odimer composed of a CD8 α chain and a CD8 β chain. However, two‐thirds of them instead express a CD8 αα homodimer, which is almost exclusively found only on IELs. The existence of CD8 αα TCR αβ T‐cell IELs in humans has only been confirmed in fetal but not in adult intestine. Those IELs that are conventional T‐cells with an αβ TCR and a CD8 αβ heterodimer recognize peptide MHC. However, αβ TCR IELs that express CD8 αα are efficiently generated in both class I and CD1 knockout mice and therefore do not recognize antigen presented by either of these molecules. At least some of these IELs appear to be restricted by nonclassical MHC mole­cules, such as TL in mice, and act as a relatively primitive first line of defense at the outer surfaces of the body.
CD8 αα homodimer γδ T‐cells are present in both human and mice. The MHC class I chain‐related (MIC) family members MICA and MICB are recognized by many human γδ TCR IELs.
Reflect for a moment on the fact that roughly 1014 bacteria reside in the intestinal lumen of the normal adult human. During an infection many of these will be pathogens rather than friendly commensals. Combined with the barrier of mucus produced by goblet cells and the protective zone of secreted IgA antibodies, these collections of intestinal lymphocytes represent a crucial line of defense. Indeed, the number of IELs in the small intestine of the mouse accounts for nearly 50% of the total number of T‐cells in all lymphoid organs.

Other mucosal sites
T‐ and B‐cells appear in the lymphoid tissue of the lung and in other mucosal sites guided by the interactions of specific homing receptors with appropriate HEV addressins (Figure 6.3). Chemokines and their receptors also play an important role in this process. For example, the CXCL10 and CCL5 chemokines are expressed in the lungs and detected by CXCR3 and CCR5, respectively, on lung homing T‐cells (Figure 6.3).