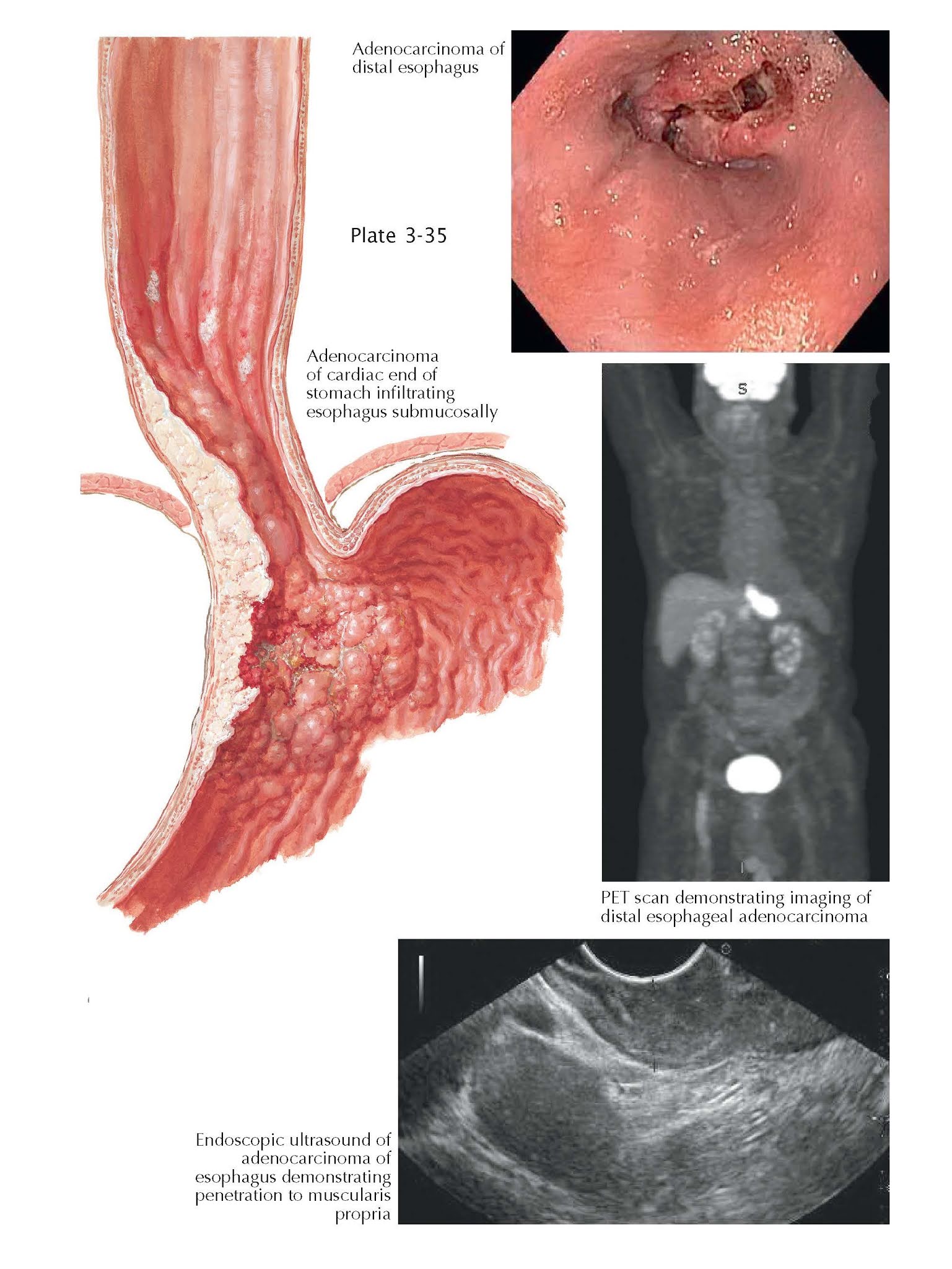 Adenocarcinoma of the esophagus generally, if not consistently, arises from Barrett esophagus, that is, metaplastic intestinal epithelium in the esophagus. It therefore has the same risk factors as Barrett esophagus, such as chronic gastroesophageal reflux, white race, male gender, central obesity, and cigarette smoking. It may arise anywhere within the region of the Barrett esophagus; its origin thereby determines its potential location within the esophagus. In other words, in patients with short­segment Barrett esophagus, cancer will develop in the distal esophagus, whereas in patients with long­segment Barrett esophagus, both the distal and middle thirds are susceptible to neoplastic transformation. Adenocarcinoma rarely develops in the proximal esophagus. The most common presenting symptom is dysphagia due to narrowing of the lumen either by the mass lesion itself or as a malignant stricture. Some patients may have iron deficiency anemia due to occult bleeding from tumor areas of friability and ulceration. Weight loss and early satiety are also common, the latter due to infiltration and fixation of the proximal stomach with loss of gastric accommodation function. Notably, these patients do not usually have reflux symptoms; if they do, symptoms are mild enough or far enough in the past that patients have not undergone screening endoscopy for Barrett esophagus. This may explain why less than 10% of patients found to develop esophageal adenocarcinoma are enrolled in a Barrett esophagus surveillance program.

There are several staging systems for adenocarcinoma of the esophagus. The TNM system is one of the most commonly used. The T stage defines the depth of penetration into the esophageal wall: T1 defines tumor confined to the mucosa, T2 up to the muscularis propria, T3 through the muscularis propria, and T4 extending outside the esophagus. The N stage defines the degree of lymph node involvement: N1 is defined by one to three nodes, N2 by three to six nodes, and N3 by more than six nodes. The M stage denotes whether metastatic disease is present. There are further subdivisions within some of these gradations; for example, T1 may be divided into specific levels within the mucosa and submucosa. This staging system is important not only for determining the prognosis and chance of extraesophageal spread but in determining the appropriate treatment, particularly with regard to endoscopic versus surgical resection and the need for adjuvant chemoradiation therapy.