Lung metastasis occurs in one-third to one-half of all patients with a non-lung primary malignancy at the time of death based on autopsy data. Primary malignancies with the greatest tendency to metastasize to the lung are breast, lung, melanoma, osteosarcoma, choriocarcinoma, and germ cell tumors. Most pulmonary metastases are caused by common malignancies that include breast, colorectal, prostate, and renal cell carcinomas. Recent studies have demonstrated a high number of circulatory tumor cells in many different primary cancers. These are believed to lodge in the small pulmonary vessels, proliferate, and ultimately form nodules. Multiple pulmonary nodules are the most common manifestations of pulmonary metastasis. They are frequently spherical and variable in size. Multiple nodules larger than 1 cm in diameter are more likely to be malignant than benign. Larger lesions or “cannonballs” are a classic manifestation. Approximately 90% of individuals with pulmonary metastasis have or had a known primary malignancy. Solitary pulmonary metastasis may occur and in general should be treated as a possible new primary lung cancer if no other metastatic sites are identiﬁed and benign disease cannot be conﬁrmed. Surgical resection is the treatment of choice in medically ﬁt individuals.

Cavitation of metastatic nodules occurs in 5% or fewer of cases and is most commonly associated with squamous cell carcinoma of the head and neck, esophagus, and cervix. Sarcomas, especially osteosarcoma, are well known to cavitate. Cavitation has also been observed with adenocarcinoma of colorectal origin and transitional cell carcinoma of the bladder. Pneumothorax occurs with cavitary pulmonary metastasis in the subpleural location because of rupture into the pleural space. Osteosarcoma is the most common metastatic malignancy to cause a spontaneous pneumothorax. A spontaneous pneumothorax in a patient with a history of a sarcoma should raise the question of occult pulmonary metastasis. Calciﬁcation of nodules, although generally a sign of benignity, has been observed in metastatic chondrosarcoma and osteosarcoma and very rarely from other primary sites. 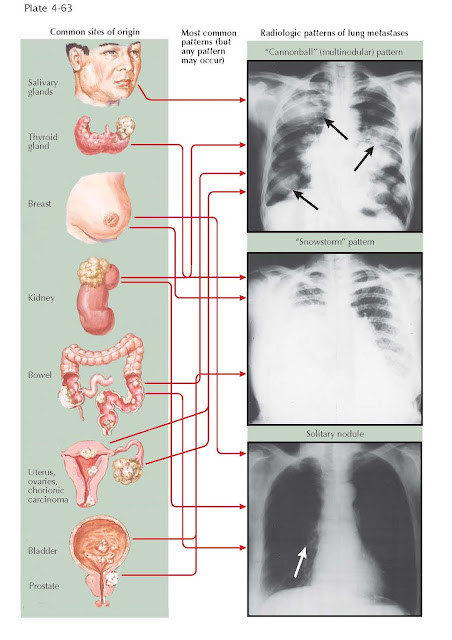 Airspace consolidation is most often seen with metastatic adenocarcinoma for gastrointestinal sources. The adenocarcinoma may spread along intact alveolar structures (lepidic growth) and form consolidation with air bronchograms or extensive ground-glass opacities. Sometimes this pattern is confused with primary bronchioloalveolar cell lung cancer.

Lymphangitic pulmonary metastasis is most commonly associated with adenocarcinoma. It is believed to be caused by hematogenous spread of tumor to the periphery of the lung and subsequent lymphangitic spread centrally toward the hilum. By this mechanism, it is most commonly bilateral. Some cases may develop because of hilar tumor involvement with centrifugal spread and account for cases of unilateral lymphangitic spread. The primary malignancies that account for most lymphangitic metastases are the lung, breast, and gastrointestinal tract, especially the stomach. The chest radiograph may reveal increased interstitial markings or demonstrate a sunburst pattern radiating from the hilar area. High-resolution computed tomography is more sensitive at detecting lymphangitic disease than chest radiography. Characteristic ﬁndings are a thickened interlobular septum with beading with or without polygonal formations. A thickened subpleural interstitium is also a frequent occurrence.

Patients will usually present with dyspnea with or without cough. The chest radiograph may be normal. Bronchoscopy with bronchoalveolar lavage and transbronchoscopic biopsy will result in a high diagnostic yield. The prognosis of lymphangitic carcinoma is generally poor unless the patient has a chemoresponsive tumor such as breast cancer, lymphoma, or choriocarcinoma.