Anatomy and Relations of Duodenum

Anatomy and Relations of Duodenum

The duodenum, the first part of the small intestine, has a total length of about 25 to 30 cm (approximately the width of 12 fingers; hence its name) and is shaped like a horseshoe with the open end facing to the left. 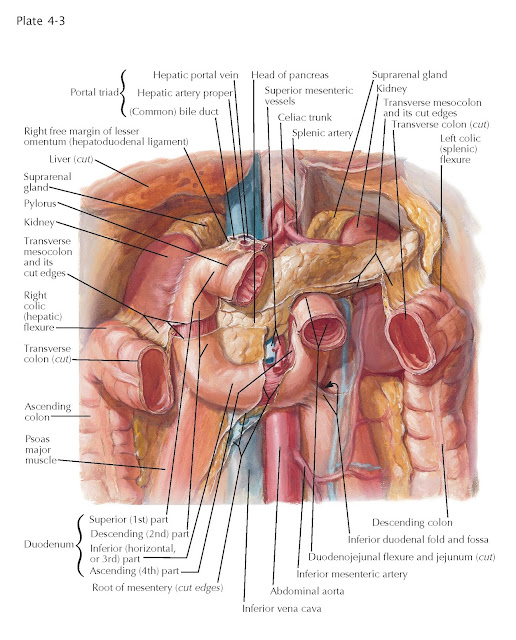 The superior (first) part, lying at the level of the first lumbar vertebra, extends horizontally from the pylorus of the stomach to the superior duodenal flexure. As a result of being attached to the hepatoduodenal ligament, this first duodenal portion has limited mobility and can adapt its course according to the filling condition of the stomach. The anterior and superior surfaces of the first half of this duodenal segment are in close relation to the inferior surface of the quadrate lobe of the liver and the gallbladder. The radiographic designation “duodenal bulb” refers to the most proximal end of the superior part of the duodenum, which is slightly dilated when the organ is filled and then more sharply separated from the stomach because of the pyloric contraction. The two layers of peritoneum that cover the anterosuperior and posteroinferior surfaces of the duodenum fuse superiorly to form the hepatoduodenal ligament, which contains the portal triad. This triad contains the portal vein, proper hepatic artery, and common bile duct. The head of the pancreas is positioned posterior to the first portion of the duodenum, with the two organs being separated by a peritoneal fold of the omental bursa.

The descending (second) part of the duodenum extends vertically from the superior to the inferior duodenal flexure, which lies approximately at the level of the third lumbar vertebra. The superior portion of the descending duodenum rests laterally upon the hilus of the right kidney, while medially its whole length is attached by connective tissue to the duodenal margin of the pancreatic head. About halfway, the descending portion is crossed anteriorly by the line of attachment of the transverse mesocolon. The portal triad is located posterior to the superior part of the duodenum and continues its course between the descending portion and the head of the pancreas to its opening at the major duodenal papilla (of Vater). This topographic relationship explains the danger of an obstruction of the duct in the presence of a tumor of the pancreatic head.

The inferior (third, or horizontal) part of the duodenum begins at the inferior duodenal flexure. It runs horizontally or sometimes in a slightly ascending direction until it reaches the region of the left border of the aorta, where, curving cranially, it changes direction to pass into the terminal, ascending (fourth) portion of the duodenum. Whereas the inferior part of the second portion and the inferior flexure lie over the psoas major of the right side of the body, the inferior duodenum, with its horizontal segment, passes over the vena cava and the abdominal aorta. The superior mesenteric vessels, before entering the root of the mesentery, cross over the inferior part of the duodenum near its transition to the ascending part. The third portion is retroperitoneal, but it becomes increasingly covered by the peritoneum, and the ascending duodenum gains a small mesentery, becoming intraperitoneal as it approaches the duodenojejunal flexure. The duodenojejunal flexure is located inferior to the transverse mesocolon at the level of the second lumbar vertebra or of the disc between L1 and L2.