The musculature of the gastric wall consists solely of smooth muscle fibers, which, in contrast to the dual-layered arrangement elsewhere in the digestive tract, exist in three distinct layers. Only the middle circular layer covers the wall completely; the other two layers, the superficial longitudinal and deepest oblique layers, are present as incomplete coats. The longitudinal and circular layers are interconnected by continuous fibers, as are the circular layer and the deepest oblique muscular coats. 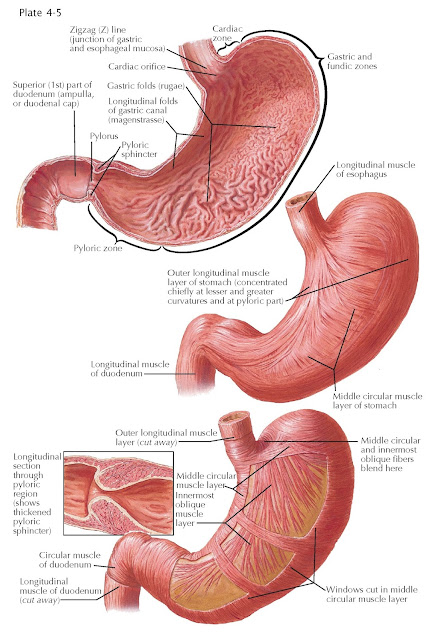 The circular layer of smooth muscle is not only the most continuous but the strongest of the stomach’s three layers. It also begins at the cardia as the continuation of the superficial fibers of the circular esophageal muscle. The circular layer becomes markedly more pronounced as it approaches the pylorus, forming the pyloric sphincter.

The innermost layer is formed by oblique fibers of the smooth muscle layer; it is most strongly developed in the region of the fundus and becomes progressively weaker as it approaches the pylorus. In the cardiac region, its fibers connect with the deeper circular layers of the esophageal muscle. No oblique fibers exist in the vicinity of the lesser curvature, but the fibers closest to it arise from a point to the left of the cardia and run parallel to the lesser curvature. There are longitudinal furrows in the lesser curvature caused by the absence of this innermost oblique layer. The oblique fiber bundles, following these first more or less longitudinal fibers, bend farther and farther to the left and, finally, become practically circular in the region of the fundus, where their continuity with the fibers of the circular layer is clearly evident. Because the oblique fibers of the anterior and posterior walls merge into one another in the region of the fundus, the oblique layer as a whole is made of U-shaped loops. The oblique fibers never reach the greater curvature in the region of the corpus but fan out and gradually disappear in the walls of the stomach. To the left of the esophagus the oblique fibers form sling fibers that project from the anterior wall of the stomach to the posterior wall, making a tight bend around the cardial notch. On the opposite side of the cardiac region, the circular layer has substantial clasp fibers that pinch and narrow the cardiac region. Acting together, the sling and clasp fibers help prevent gastric reflux and form a functional, but not anatomic, lower esophageal sphincter.

The middle circular layer thickens considerably at the pylorus, forming a muscular ring that acts as a true anatomic sphincter. The pyloric sphincter is not continuous with the circular musculature of the duodenum but is separated from it by a thin, fibrous septum of connective tissue. A few fibers of the longitudinal muscle layer, the greater mass of which, as mentioned above, is continuous with the corresponding layer of the duodenum, contribute also to the muscle mass of the pyloric sphincter; they may even find their way into the network of the sphincter bundles and penetrate as far as the submucosa.