The mucosa of the widened first portion of the duodenum, known also as the duodenal ampulla (cap, bulb), is relatively flat and smooth except for a few small longitudinal folds. Except for the smooth duodenal ampulla, the mucosal surface of the duodenum, which in living subjects is reddish in color, is lined with villi, giving the small intestines their velvety appearance. The mucosa of the distal duodenum is nearly identical to the small intestine with circular folds (of Kerckring) projecting into the lumen. These folds, which considerably increase the surface area of the intestine, begin in the region of the superior duodenal flexure, increasing in number and elevation in the more distal parts of the duodenum. They do not always form complete circles along the entire intestinal wall, because some are semicircular or crescent shaped, whereas others branch out to connect with adjacent folds. Very often they deviate from their circular pattern and pursue a more spiral course. The circular folds are large macroscopic structures and include mucosa and submucosa in their core. The more superficial layers of the duodenum, the muscularis externa and adventitia, are not included in the circular folds. 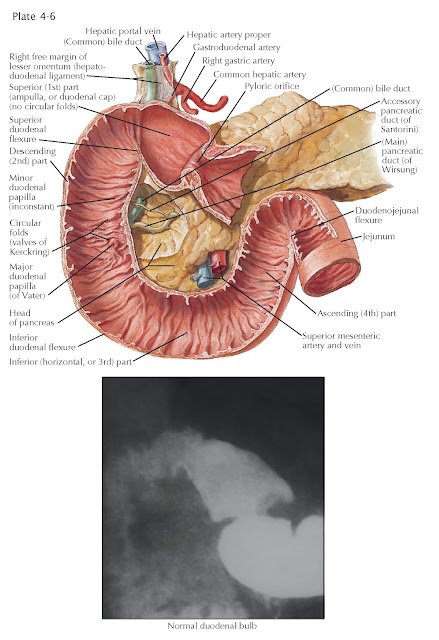 Approximately halfway down the posteromedial aspect of the descending part of the duodenum, a distance of approximately 8.5 to 10 cm from the pylorus, is located the major duodenal papilla, also known as the papilla (of Vater). This is where the common bile duct and the major pancreatic duct (of Wirsung) open into the duodenum. The common bile duct approaches the duodenum within the enfolding hepatoduodenal ligament of the lesser omentum and continues inferiorly in the groove between the descending portion of the duodenum and the pancreas. The terminal part of the common bile duct produces a slight but perceptible longitudinal impression in the posteromedial duodenal wall known as the longitudinal fold of the duodenum. This fold usually ends at the papilla but may occasionally continue for a short distance beyond the papilla in the form of the so-called frenulum. Small hoodlike folds at the top of the papilla protect the mouth of the combined bile duct and pancreatic duct. A small, wartlike, and generally less distinct second papilla, the minor duodenal papilla, is situated about 2.5 cm above and slightly medial to the major papilla. It serves as an opening for the minor pancreatic duct (of Santorini).

The duodenal ampulla, varying in form, size, position, and orientation, appears in an anteroposterior radiograph as a triangle, with its base at the pylorus and its tip pointing toward the superior flexure of the duodenum. The duodenum’s longitudinal folds, as well as the circular folds in the lower parts of the duodenum, can be visualized radiographically if a barium meal of appropriate quantity and consistency is given. In such a relief picture of the mucosa, the region of the major duodenal papilla occasionally appears as a small, roundish filling defect. When the papilla is enlarged in the form of a small diverticulum, the contrast medium may sometimes enter the terminal portions of the bile and pancreatic ducts, with the result that on the x-ray, this area l oks like the shape of a molar tooth with two roots.