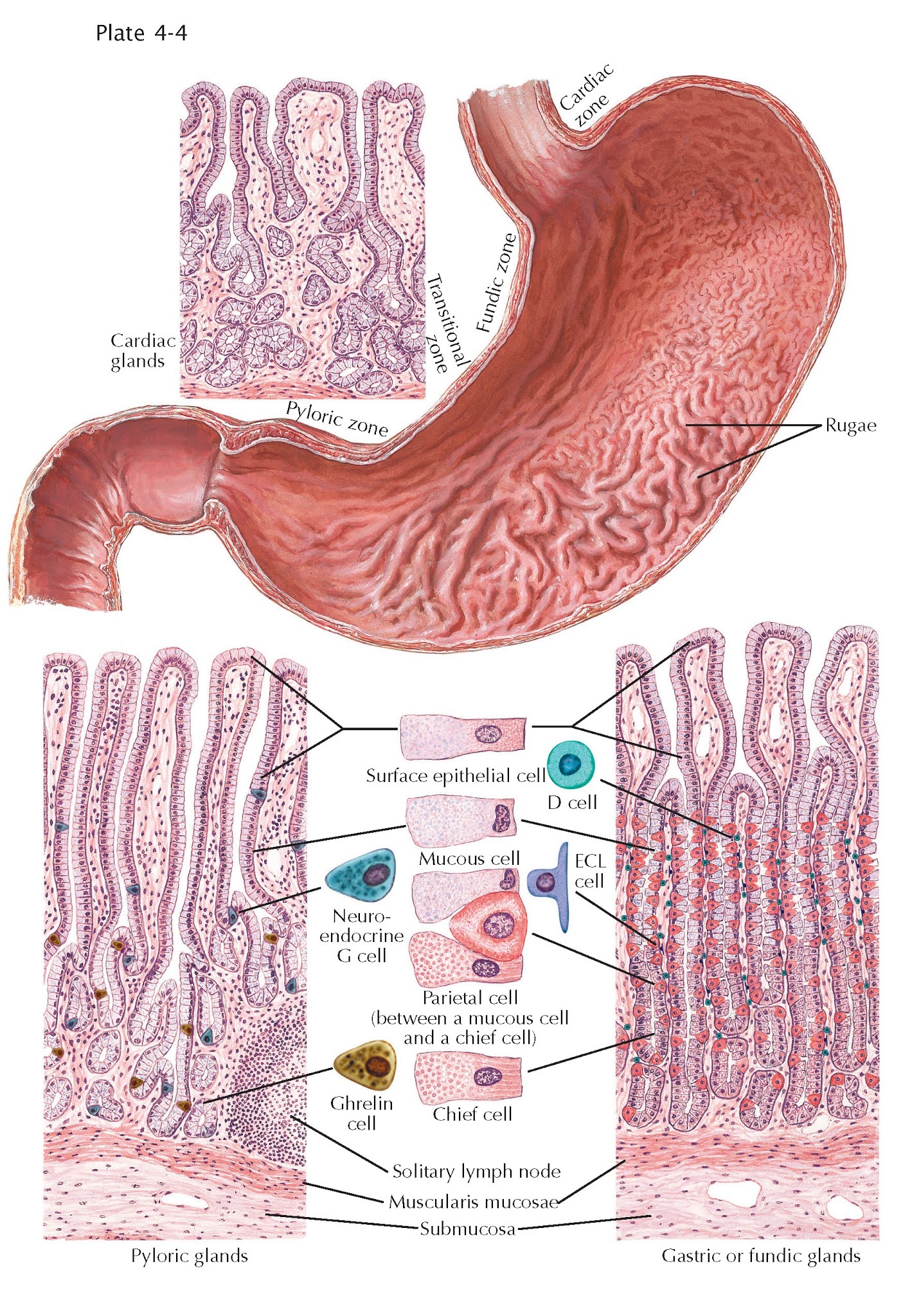 The reddish-gray mucous membrane of the stomach, composed of a surface layer of epithelial cells, the lamina propria, and the muscularis mucosae, commences at the cardia along an irregular or zigzag line (referred to as the Z line). Deep to the mucosa is the submucosa and three external muscle layers of the stomach. When the stomach is empty, the mucosa appears to be formed of folds (rugae), which flatten considerably when the stomach is distended. In the region of the lesser curvature, where the mucosa is more strongly fixed to the underlying muscular layer, the folds take a longitudinal course. The rugae are generally smaller in the fundus and become larger as they approach the pyloric portion of the stomach, where they show a tendency to run diagonally across the stomach toward the greater curvature. Besides these broad folds, the gastric mucosa is further characterized by numerous shallow invaginations, which divide the mucosal surface into a mosaic of elevated areas varying in shape. When viewed under magnification, several delicate ledges, or mammillated areas, and depressions, known as gastric pits, can be seen. Gastric glands empty into the stomach lumen through the gastric pits.

The gastric epithelium consists of a single layer of simple columnar cells, and it is sharply demarcated from the stratified squamous epithelium of the esophagus at the gastroesophageal junction in the cardiac area of the stomach. The columnar epithelial cells are of the mucoid type and contain mucigen granules in their outer portions and a single ovoid nucleus at their base. These cells line the tubular cardiac glands along with mucoid neck, chief, parietal, and enteroendocrine cells that allow the stomach to carry out its functions.

1. The cardiac glands are confined to a narrow zone, 0.5 to 4 cm in width, around the cardiac orifice. They are coiled and are lined almost entirely by mucus-producing epithelial cells.

2. The gastric, or fundic, glands are located in the fundus and over the greater part of the body of the stomach. They are fairly straight, simply branched tubules, with a narrow lumen reaching down almost to the muscularis mucosae. They are lined by four types of cells: (1) The mucoid neck cells are the same as seen in the cardiac region but differ from the cells of the surface epithelium in that their mucigen granules have slightly different staining qualities and their nuclei tend to be flattened or concave at the base of the cells. (2) The chief cells are found primarily in the lower half of the glands. They have a spherical nucleus and contain light-refracting granules and a Golgi apparatus, the size and form of which vary with the state of secretory activity. They produce pepsinogen, the precursor of pepsin, a digestive enzyme. (3) Parietal cells are larger and usually clustered away from the gland’s lumen, to which they connect by small gaps stemming from intra-cellular canaliculi. Their intraplasmatic granules are strongly eosinophilic; they refract light less than chief cells do. Parietal cells produce the hydrochloric acid that lowers the pH in the stomach. They also produce intrinsic factor, a glycoprotein that allows vitamin B12 to be absorbed further along in the ileum of the gastrointestinal tract. (4) Enteroendocrine cells are isolated glandular cells that release hormones into the lamina propria to modulate activity of the stomach and other digestive organs. Each enteroendocrine cell in the stomach may secrete gastrin (C cells), ghrelin, bombesin, enkephalins, vasoactive intestinal peptide, or somatostatin (D cells). Enterochromaffin-like cells secrete histamine, and enterochromaffin cells secrete serotonin. Different hormones are released by enteroendocrine cells elsewhere in the gastrointestinal tract.

3. The pyloric glands are located in the pyloric region but also spread into a transitional zone, in which both gastric and pyloric glands are found and which extends diagonally and distally from the lesser to the greater curvature. The tubes of the pyloric glands are shorter, more tortuous, and less densely packed, and their ends are more branched than the fundic glands. Pyloric gland pits are markedly deeper than those in other regions and are lined primarily by mucous cells (as in the cardiac region); occasional parietal or enteroendocrine cells may also be seen.