The stomach is an enlarged reservoir of the proximal digestive tract, in which ingested food is soaked in gastric juice containing enzymes and hydrochloric acid and then released spasmodically into the duodenum by gastric peristalsis. The form and size of the stomach vary considerably, depending on the position of the body and the degree of filling. 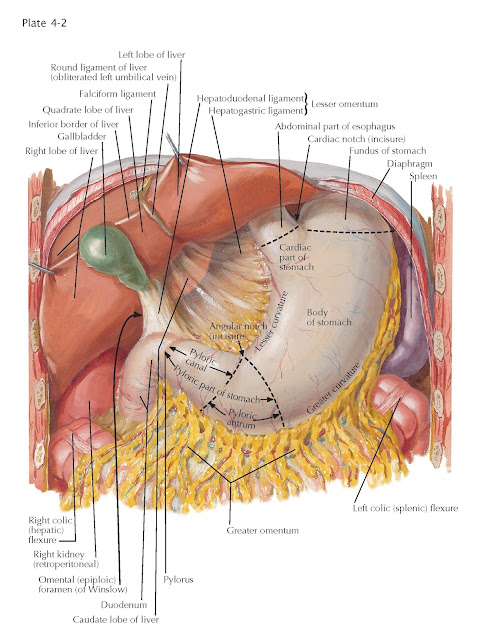 The surface of the stomach is entirely covered and suspended by peritoneum. A double layer of peritoneum, deriving from the embryonic ventral mesentery, extends from the lesser curvature and first part of the duodenum toward the liver. This is the lesser omentum, and it may be subdivided into a larger, thinner, hepato- gastric ligament and a smaller, thicker, distal hepatoduodenal ligament, which attaches to the pyloric region and to the upper horizontal portion of the duodenum. The portal vein, proper hepatic artery, and common bile duct are found within the hepatoduodenal ligament. The free edge of the hepatoduodenal ligament, located on the right end of the lesser omentum, forms the anterior border of the omental (epiploic) foramen (of Winslow), which gives access to the omental bursa (lesser sac) located posterior to the stomach. The greater omentum, a derivative of the embryonic dorsal mesentery, passes inferiorly from the greater curvature and contains, between its two frontal and two dorsal sheets, the inferior recess of the omental bursa. Typically this space is negligible and the entire greater omentum can be moved like a single apronlike object hanging from the greater curvature.

The anterior surface of the stomach contacts the peritoneum lining the anterior abdominal wall, the inferior surface of the left lobe of the liver, and, to some extent in the pyloric region, the quadrate lobe of the liver and the gallbladder. Its posterior surface is in apposition with retroperitoneal structures (pancreas, splenic vessels, left kidney, and adrenal gland) from which, however, it is separated by the omental bursa. The fundus of the stomach bulges against the left diaphragmatic dome. On the left, adjacent to the fundus, is the spleen, which is connected to the stomach by the gastrosplenic ligame also derived from the embryonic dorsal mesentery.