DEVELOPMENT OF STOMACH AND GREATER OMENTUM

DEVELOPMENT OF STOMACH AND GREATER OMENTUM 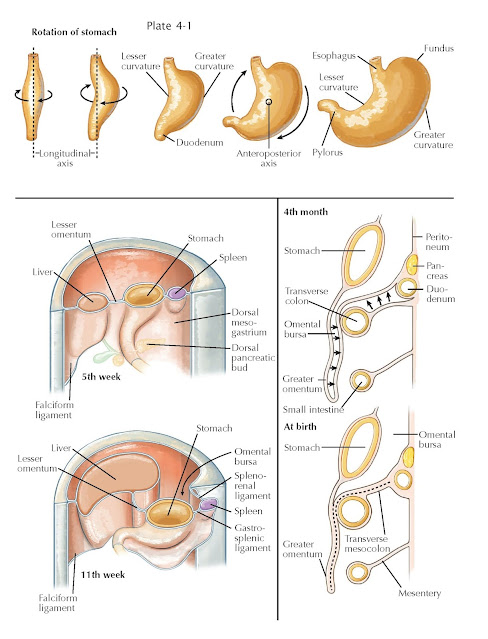 The rotation and expansion of the stomach do not occur in isolation. The foregut is attached to the posterior body wall by a dorsal (posterior) mesentery, in which the spleen and part of the pancreas will develop. The section of this mesentery between the developing spleen and the stomach will become the greater omentum. Anteriorly the stomach is connected to the liver, and thereafter, to the anterior body wall by a ventral (anterior) mesentery. The section of the ventral mesentery that attaches the liver to the anterior body wall will become the falciform ligament, and the section between the liver, stomach, and duodenum will form the lesser omentum. As the stomach’s posterior surface expands and rotates to the left, the attached mesentery follows, so that the spleen lies along the left side of the abdominal cavity. The dorsal mesentery between the stomach and spleen expands, folding onto itself and creating a large pocket between the two folds. and expansion of the greater curvature bring this double-layered “apron” to extend inferiorly from the stomach, falling anterior to the transverse colon and small intestines. The space between the two folds is termed the inferior recess of the omental bursa; however, this space typically disappears as development proceeds and the two folds adhere and create a single greater omentum. As the liver grows, the stomach shifts to the left side of the abdomen and the liver shifts to the right side. This brings the omental bursa to lie anterior to the pancreas, inferior to the inferior surface of the liver, and posterior to the stomach and lesser omentum, which can be subdivided into the hepatogastric and hepatoduodenal ligaments. Occasionally, the omental bursa can extend superiorly and posteriorly to the liver as the superior recess of the omental bursa. In its mature form, the omental bursa is isolated from the rest of the abdominal cavity except for a small opening called the omental foramen, located immediately posterior to the right edge of the hepatoduodenal ligament.