Histoplasmosis is caused by inhalation of spores of the fungus Histoplasma capsulatum. The organism exists widely in nature and is found throughout the United States but is most common in the St. Lawrence and Missouri–Ohio–Mississippi River valleys. It also exists in most of the river valleys throughout the world between the 45th parallel north and the 45th parallel south. Droppings of bats and birds seem to provide in their excreta the essential elements favoring sporulation of the fungus in soil. Therefore, sites commonly associated with exposure to H. capsulatum include chicken coops, caves, abandoned buildings, bird roost sites, and wood lots. Activities associated with exposure include excavation, construction, demolition, wood cutting and gathering, and exploring caves. However, in most cases, patients recall no such exposure or only do so when speciﬁcally questioned.

Infections with H. capsulatum are extremely common; it has been estimated that up to 50 million people in the United States have been infected, and up to 500,000 new infections occur each year. The outcome of acute infection depends on the inoculum size, presence of underlying lung disease, general immune status, and speciﬁc immunity to H. capsulatum. In more than 95% of cases, the infection is subclinical. In some, the disease may manifest in the form of a ﬂulike syndrome or a mild or severe pneumonia, which is usually self-limited and often undiagnosed. This illness usually presents as a subacute pulmonary infection weeks to months after exposure. Symptoms are usually mild, and radiographs typically show focal inﬁltrates and mediastinal or hilar lymphadenopathy. Symptoms typically resolve within several weeks, but fatigue and asthenia may persist for months. 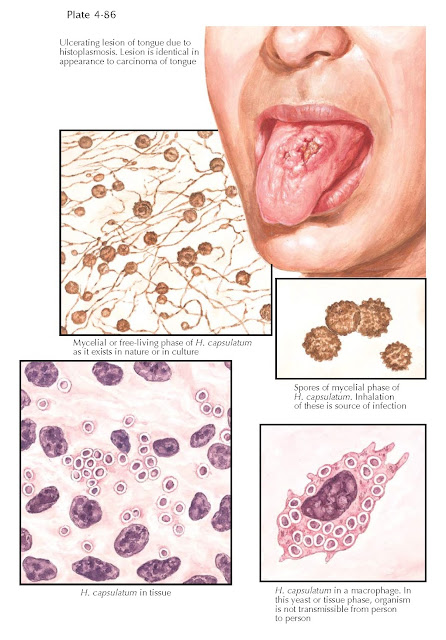 With an acute heavy exposure, diffuse reticulonodular or miliary inﬁltrates are seen, and the infection can progress to respiratory failure or progressive extrapulmonary dissemination. In patients with underlying lung disease, the pulmonary disease can become chronic and progressive and closely simulates cavitary tuberculosis. Chronic disease can also present as broncholithiasis, mediastinal granuloma, and ﬁbrosing mediastinitis. On even rarer occasions, primarily in immunosuppressed patients (e.g., HIV, transplantation, tumor necrosis factor-inhibitor treatment) or those at extremes of age, H. capsulatum may disseminate acutely throughout the body to the bone marrow, skin, liver, spleen, meninges, and alimentary tract. In addition, chronic progressive disseminated histoplasmosis occurs rarely in older immunocompetent adults.

When the spores from the free-living mycelial phase of H. capsulatum gain entry into the body, they convert to the tissue or yeast phase. These appear in tissues and respiratory secretions as intracellular, encapsulated organisms that are ovoid and 3 to 5 m in diameter that demonstrate narrow-based budding. Accompanying histopathologic ﬁndings include granulomas, lympho- histiocytic aggregates, and diffuse mononuclear cell inﬁltrates.

Diagnosis relies on a combination of histopathology, cultures, antigen detection (in respiratory specimens and urine), and serologic tests (including complement ﬁxation and immunodiffusion). In acute diffuse pulmonary disease, antigen tests and cultures are useful, although serology results are often negative. In acute localized pulmonary disease, serology is often positive, but fungal detection is more difﬁcult. In chronic pulmonary disease, serology and culture results are often positive. Bronchoscopy to obtain adequate respiratory specimens is often required, and on occasion, lymph node or lung biopsy is necessary for diagnosis.

Treatment is indicated for cases of acute pneumonia that are unusually severe, for chronic progressive pulmonary disease, and for disseminated histoplasmosis. Other forms of histoplasmosis require speciﬁc treatment only if progression is demonstrated. 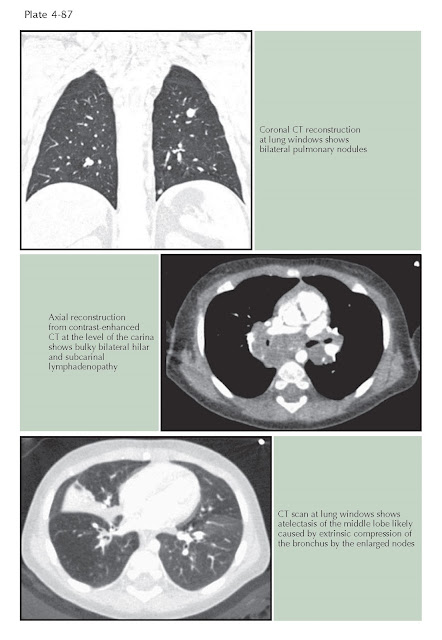 Patients with mild to moderate histoplasmosis are treated with itraconazole, although amphotericin B is indicated for moderately severe and severe infections, especially for initial treatment. Concomitant use of systemic corticosteroids for 1 to 2 weeks is helpful in acute severe disease manifesting as acute respiratory distress syndrome. The duration of antifungal treatment is usually 6 to 12 weeks.

Itraconazole for 18 to 24 months has been successful in the treatment of patients with chronic pulmonary histoplasmosis. After completion of successful treatment, relapse occurs in 10% to 20% of patients over 5 years. Therefore, these patients should be carefully followed during this period. In disseminated disease, severely ill patients should be initially treated with amphotericin B followed by itraconazole for at least 1 year. Less severely ill patients may be treated from the beginning with itraconazole.