Nocardiosis is an uncommon, suppurative, bacterial infection caused by aerobic actinomycetes in the genus Nocardia. Although the lungs, skin, and subcutaneous tissues are ordinarily involved, the disease may spread to any other organ, particularly to the central nervous system (CNS). Another characteristic of nocardiosis is its tendency to relapse or progress despite appropriate therapy.

The genus Nocardia includes more than 50 species, at least 33 of which cause human disease, most commonly Nocardia asteroides complex. Nocardia is a gram-positive, nonmotile, nonencapsulated, partially acid-fast, aerobic, highly evolved bacterium with characteristic ﬁlamentous branching that fragments into bacillary or coccoid forms. Acid-fastness and growth in aerobic conditions help to distinguish Nocardia from Actinomyces. 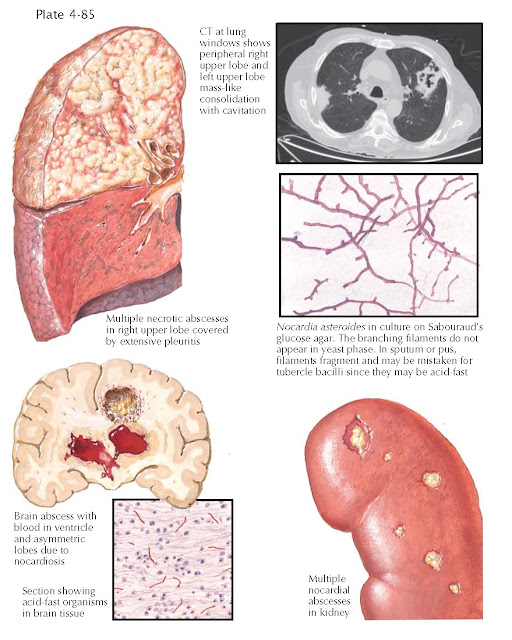 Nocardia spp. occur worldwide and exist in soil, decaying vegetable matter, and aquatic environments as saprophytes. Inhalation is the most common route of infection, although ingestion, direct inoculation, and nosocomial transmission have also been described. Individuals of all ages may be infected, and males con- tract the disease more frequently, presumably because of occupational exposure. Nocardiosis is usually an opportunistic infection; however, one-third of cases occur in immunocompetent hosts. Immunocompromising illnesses that commonly predispose to nocardiosis include glucocorticoid therapy, malignancy, organ and hematopoietic transplantation, and HIV infection. Less common predispositions include diabetes mellitus, alcoholism, chronic granulomatous disease, pulmonary alveolar proteinosis, tumor necrosis factor-inhibitor therapy, and tuberculosis.

The location and extent of disease can be used to classify nocardiosis as pulmonary, CNS, cutaneous, and disseminated disease. In the lungs, nocardiosis produces chronic to fulminating disease; in other viscera and skin, it causes chronic suppuration, sinuses, and abscess formation. Hematogenous dissemination can occur to almost any organ.

Presenting symptoms of pulmonary nocardiosis are often similar to those of pneumonia or tuberculosis. Radiographic manifestations include single or multiple nodules (with or without cavitation), lobar consolidation, reticulonodular or interstitial inﬁltrates, and pleural effusions. Empyema, mediastinitis, pericarditis, and superior vena cava syndrome may occur after contiguous spread.

Nocardial brain abscess may occur in any region of the brain and present clinically with fever, headache, meningismus, seizures, and focal neurologic deﬁcits. CNS nocardiosis may also present as a mass lesion in immunocompetent patients or infrequently as subacute or chronic meningitis.

Manifestations of cutaneous nocardiosis include ulcerations, pyoderma, cellulitis, nodules, and subcutaneous abscesses. Involvement of regional lymphatics and formation of a mycetoma involving subcutaneous tissues and bones with draining sinuses may also occur. Disseminated nocardiosis is deﬁned as two noncontiguous sites of involvement.

Nocardiosis should be suspected in any patient who presents with brain, soft tissue, or cutaneous lesions and a concurrent or recent pulmonary process. Nocardial infection should also be suspected in patients with suppurative pneumonia unresponsive to conventional antimicrobial agents, particularly with immunosuppression. The differential diagnosis primarily includes mycobacterial, fungal, parasitic, and bacterial infections as well as malignancy.

Deﬁnitive diagnosis depends on pathogen isolation from clinical specimens. Invasive sampling is often necessary, and the clinical laboratory needs to use speciﬁc media and staining procedures. The characteristic appearance on Gram stain and partial acid fastness on direct examination of clinical samples can yield a rapid presumptive diagnosis. Nocardia spp. require 5 to 21 days to grow in culture. If possible, isolates of Nocardia should be sent to a reference laboratory for precise identiﬁcation and conﬁrmation of susceptibility testing.

Nocardia spp. clinical isolates are variably resistant to antibiotics. Monotherapy with an oral agent is appropriate for cutaneous infection in an immunocompetent host. Trimethoprim/sulfamethoxazole is the drug of choice. Empiric coverage with two or three agents is recommended in severe infection (e.g., trimethoprim/ sulfamethoxazole in combination with amikacin); with CNS involvement, a third-generation cephalosporin or imipenem should be added. Initial treatment should be administered intravenously for 3 to 6 weeks and until clinical improvement occurs. Therapy should be continued with two oral drugs, such as trimethoprim/sul-famethoxazole, minocycline, or amoxicillin/clavulanate for a total duration of 6 to 12 months. Surgical intervention may be required for brain and large soft tissue abscesses unresponsive to antibiotics, empyema, mediastinal ﬂuid collection, and pericarditis. Prolonged oral maintenance therapy to prevent relapse is required in persistently immunosuppressed patients. The rate for patients with in pulmonary nocardiosis ranges from 14% to 40%. Disseminated disease has a mortality rate of 7% to 44% in immu ocompetent and 85% in immunocompromised hosts.