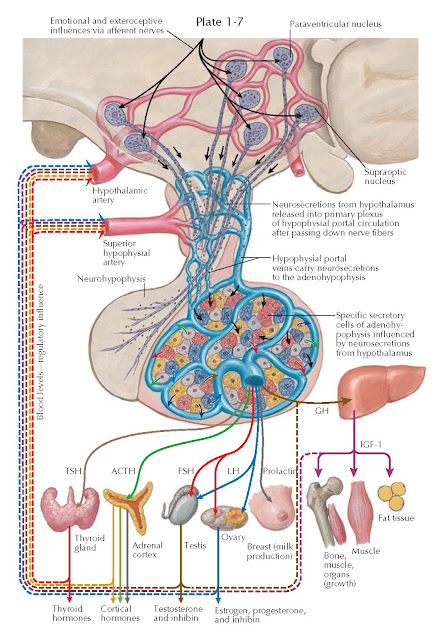 Blood levels of trophic and target gland hormones are also affected by endogenous secretory rhythms. Most hormonal axes have an endogenous secretory rhythm of 24 hours—termed circadian or diurnal rhythms—and are regulated by retinal inputs and hypothalamic nuclei. The retinohypothalamic tract affects the circadian pulse generators in the hypothalamic suprachiasmatic nuclei. Rhythms that occur more frequently than once a day are termed ultradian rhythms, and those that have a period longer than a day are termed infradian rhythms (e.g., menstrual cycle). Examples of circadian rhythms of pituitary and target gland hormones include the following: GH and prolactin secretion is highest shortly after the onset of sleep; cortisol secretion is lowest at 11 pm and highest between 2 and 6 am; and testosterone secretion is highest in the morning. In addition, GH, ACTH, and prolactin are also secreted in brief regular pulses, reﬂecting the pulsatile release of their respective hypothalamic releasing factors.

The circadian and pulsatile secretion of pituitary and target gland hormones must be considered when assessing endocrine function. For example, because of pulsatile secretion, a single blood GH measurement is not a good assessment of either hyperfunction or hypofunction of pituitary somatotropes; the serum concentration of the GH-dependent peptide insulinlike growth factor 1 (IGF-1)—because of its much longer serum

half-life—provides a better assessment of GH secretory status. Circulating hormone concentrations are a function of circadian rhythms and hormone clearance rates; laboratories standardize the reference ranges for hormones based on the time of day. For example, the reference range for cortisol changes depending on whether it is measured in the morning or afternoon. Normal serum testosterone concentrations are standardized based on samples obtained from morning venipuncture. Disrupted circadian rhythms should clue the clinician to possible endocrine dysfunction—thus, the loss of circadian ACTH secretion with high midnight concentrations of cortisol in the blood and saliva is consistent with ACTH-dependent Cushing syndrome.