RELATIONSHIPS OF THE SELLA TURCICA

RELATIONSHIPS OF THE SELLA TURCICA

The sella turcica—where the pituitary gland is located— is the deep depression in the body of the sphenoid bone. In adults, the normal mean anterior-posterior length is less than 14 mm, and the height from the ﬂoor to a line between the tuberculum sellae and the tip of the posterior clinoid is less than 12 mm. 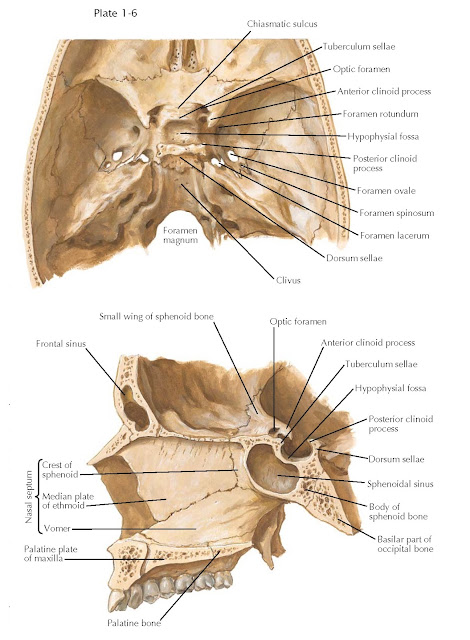 To understand its relations, a more general description of the sphenoid bone is needed. Situated at the base of the skull in front of the temporal bones and the basilar part of the occipital bone, the sphenoid bone somewhat resembles a bat with its wings extended. It is divided into a median portion, or body, two great and two small wings extending outward from the sides of the body, and two pterygoid processes projecting below. The cubical body is hollowed out to form two large cavities, the sphenoidal air sinuses, which are separated from each other by a septum that is often oblique. The superior surface of the body articulates anteriorly with the cribriform plate of the ethmoid and laterally with the frontal bones. Most of the frontal articulation is with the small wing of the sphenoid bone. Behind the ethmoidal articulation is a smooth surface, slightly raised in the midline and grooved on either side, for the olfactory lobes of the brain. This surface is bound behind by a ridge, which forms the anterior border of a narrow transverse groove, the chiasmatic sulcus, above and behind which lies the optic chiasm. The groove ends on either side in the optic foramen, through which the optic nerve and ophthalmic artery enter into the orbital cavity.

Behind the chiasmatic sulcus is an elevation, the tuberculum sellae. Immediately posterior there is a deep depression, the sella turcica, the deepest part of which is called the hypophysial fossa. The anterior boundary of the sella turcica is completed by two small prominences, one on each side, called the middle clinoid processes. The posterior boundary of the sella is formed by an elongated plate of bone, the dorsum sellae, which ends at its superior angles as two tubercles, the posterior clinoid processes.

Behind the dorsum sellae is a shallow depression, the clivus, which slopes obliquely backward to continue as a groove on the basilar portion of the occipital bone. The lateral surfaces of the sphenoid body are united with the great wings and the medial pterygoid plates. Above the attachment of each great wing is a broad groove that contains the internal carotid artery and the cavernous sinus. The superior surface of each great wing forms part of the middle fossa of the skull. The internal carotid artery passes through the foramen lacerum, a large, somewhat triangular aperture bound in the front by the great wing of the sphenoid, behind by the apex of the petrous portion of the temporal bone, and medially by the body of the sphenoid and the basilar portion of the occipital bone. The nasal relations of the pituitary fossa are the crest of the sphenoid bone and the median, or perpendicular, plate of the ethmoid. Since the introduction of the operating microscope in 1969 by Jules Hardy, the sublabial transseptal trans-sphenoidal approach to the pituitary has been the standard in the treatment of pituitary adenomas. However, improved endoscopes have led to development of endoscopic transnasal applications in many pituitary surgical centers (see Plate 1-31).