Craniopharyngioma is the most common tumor found in the region of the pituitary gland in children and adolescents and constitutes about 3% of all intracranial tumors and up to 10% of all childhood brain tumors. Craniopharyngiomas—histologically benign epithelioid tumors arising from embryonic squamous remnants of Rathke pouch—may be large (e.g., 6 cm in diameter) and invade the third ventricle and associated brain structures. This tumorous process is usually located above the sella turcica, depressing the optic chiasm and extending up into the third ventricle. Less frequently, craniopharyngiomas are located within the sella, causing compression of the pituitary gland and frequently eroding the boney conﬁnes of the sella turcica. Signs and symptoms—primarily caused by mass effect—typically occur in the adolescent years and rarely after age 40 years. The mass effect symptoms include vision loss by compression of the optic chiasm; diabetes insipidus by invasion or disruption of the hypothalamus or pituitary stalk; hypothalamic dysfunction (e.g., obesity with hyperphagia, hypersomnolence, disturbance in temperature regulation); various degrees of anterior pituitary insufﬁciency (e.g., growth hormone deﬁciency with short stature in childhood, hypogonadism, adrenal insufﬁciency, hypothyroidism); hyperprolactinemia caused by compression of the pituitary stalk or damage to the dopaminergic neurons in the hypothalamus; signs and symptoms of increased intracranial pressure (e.g., headache, projectile emesis, papilledema, optic atrophy); symptoms of hydrocephalus (e.g., mental dullness and confusion) when large tumors obstruct the ﬂow of cerebrospinal ﬂuid; and cranial nerve palsies caused by cavernous sinus invasion. 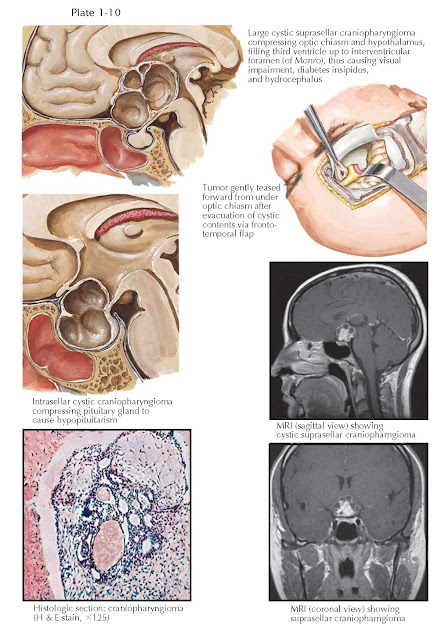 The ﬁndings on radiologic imaging are quite characteristic. Plain skull radiographs and computed tomography (CT) show irregular calciﬁcation in the suprasellar region. Magnetic resonance imaging (MRI) typically shows a multilobulated cystic structure that is usually suprasellar in location, but it may also appear to arise from the sella. The cystic regions are usually ﬁlled with a turbid, cholesterol-rich, viscous ﬂuid. The walls of the cystic and solid components are composed of whorls and cords of epithelial cells separated by a loose network of stellate cells. If there are intercellular epithelial bridges and keratohyalin, the tumor is classiﬁed as an adamantinoma.

Treatment options for patients with craniopharyngiomas include observation, endonasal transsphenoidal surgery for smaller intrasellar tumors, craniotomy for larger suprasellar tumors, stereotactic radiotherapy, or a combination of these modalities. Most of these treatment approaches result in varying degrees of anterior or posterior pituitary hormone deﬁcits (or both). In addition, recurrent disease after treatment is common (40%) because of tumor adherence to surrounding structures, and long-term follow-up is indicated.