RELATIONSHIP OF THE PITUITARY GLAND TO THE CAVERNOUS SINUS

RELATIONSHIP OF THE PITUITARY GLAND TO THE CAVERNOUS SINUS

The sinuses of the dura mater are venous channels that drain the blood from the brain. The cavernous sinuses are so named because of their reticulated structure, being traversed by numerous interlacing ﬁlaments that radiate out from the internal carotid artery extending anteroposteriorly in the center of the sinuses. They are located astride and on either side of the body of the sphenoid bone and adjacent to the pituitary gland. Each opens behind into the superior and inferior petrosal sinuses (see Plate 3-10). On the medial wall of each cavernous sinus, the internal carotid artery is in close contact with the abducens nerve (VI). On the lateral wall are the oculomotor (III) and trochlear (IV) nerves and the ophthalmic and maxillary divisions of the trigeminal nerve (V). These structures are separated from the blood ﬂowing along the sinus by the endothelial lining membrane. The two cavernous sinuses communicate with each other by means of two intercavernous sinuses. The anterior sinus passes in front of the pituitary gland and the posterior behind it. Together they form a circular sinus around the hypophysis. These channels are found between the two layers of dura mater that comprise the diaphragma sellae and are responsible for copious bleeding when this structure is incised when a transcranial surgical approach to the pituitary gland is used. Sometimes profuse bleeding from an inferior circular sinus is encountered in the transsphenoidal approach to the pituitary gland (see Plate 1-31). 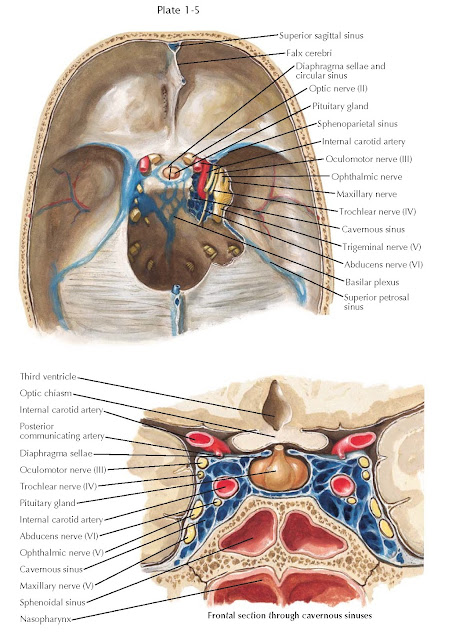 The intercavernous portion of the internal carotid artery runs a complicated course. At ﬁrst, it ascends toward the posterior clinoid process; then it passes forward alongside the body of the sphenoid bone and again curves upward on the medial side of the anterior clinoid process. It perforates the dura mater that forms the roof of the sinus. This portion of the artery is surrounded by ﬁlaments of sympathetic nerves as it passes between the optic and oculomotor nerves. The hypophysial arteries are branches of the intercavernous segment of the internal carotid artery. The inferior branch supplies the posterior lobe of the pituitary gland, and the superior branch leads into the median eminence to start the hypophysial portal system to the anterior lobe. The surgical approaches to the pituitary gland are designed to circumvent the major vascular channels and to avoid injury to the optic nerves and to the optic chiasm (see Plate 1-31).