CIRCUIT FORMATION IN THE SPINAL CORD

CIRCUIT FORMATION IN THE SPINAL CORD

Cellular diversity provides the foundation for the next essential step of nervous system development the construction of interconnected networks of neurons that serve specific behavioral functions. These networks are referred to as neural circuits, and their identity reflects the molecular distinctions between neuron classes and between the growth, adhesion, and recognition molecules that mediate elaboration of axons, dendrites, and synapses. The key constraints for circuit development reflect the genesis of the neurons that constitute each circuit: their place of final division and their final position. This process is remarkably well understood for the construction of circuits that mediate motor control, relay of sensory information in the spinal cord, and local sensory-motor integration for segmental reflex control. As described above, sensory relay neurons and related interneurons are generated from the alar plate, motor neurons and related interneurons are generated from the basal plate, and peripheral sensory ganglion cells are generated from the neural crest. Each of these cell classes will become interconnected in distinct circuits. For these circuits to form, there must be clear rules, mediated by local chemoattractant and chemorepulsive cues, for where each neuron class can extend its axons and dendrites. In addition, there are temporal gradients of neuronal differentiation so that some neuron classes grow their axons and dendrites earlier (as early as 26 days of gestation), and, within a few days, other neuron classes will begin to extend their processes. Thus the construction of circuits from the newly generated neurons in the spinal cord relies on time of origin of neurons, neuronal position, and time of axon or dendritic growth. 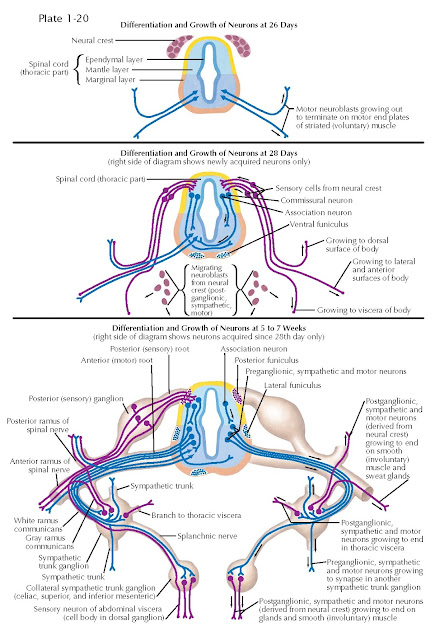 The direction of growth chosen by axons from different neuron classes must be exquisitely regulated to ensure proper connectivity within spinal cord circuits. Thus motor neurons, whose axons are the earliest to grow out of the spinal cord, are directed to an exit point lateral and anterior, based on chemoattractant signals that guide them there and cell surface adhesion molecules that facilitate their exit from the central nervous system. Additional cell adhesion molecules maintain the appropriate trajectory for these axons and facilitate the formation of a coherent nerve. Chemorepulsive signals prevent axons from growing aberrantly to inappropriate nonmuscle targets. Accordingly, motor axons grow to their skeletal muscle and autonomic ganglia targets with great fidelity.

The parallel growth of several classes of sensory neuron axons within the spinal cord illustrates the complexity and remarkable precision of the relationship between cell position, axon guidance, and molecular signals that attract or repel subsets of axons. Sensory relay neurons or interneurons generated from the alar plate either extend axons across the anterior midline and then into the spinothalamic tract or into the motor column on the same side to make local reflex connections (like those necessary for withdrawal in response to painful stimuli). Clearly, there need to be discriminating sets of signals: one set that attracts spinothalamic relay axons to the anterior midline and then maintains them on the contralateral side, and one set that attracts interneuron axons to the anterior horn and prevents them from extending past the midline. The signals that influence the commissural axons are now fairly well understood. These include a secreted chemoattractant molecule called netrin, which is similar in its molecular structure to the extracellular matrix adhesion molecule laminin, and a secreted chemorepulsive molecule called slit, which signals an axon that it should not cross back once it has crossed the midline. Thus the anatomic precision of pathways for relaying pain and temperature is generated by precise molecular mechanisms that attract axons to the midline, guide them across, and then maintain them on the contralateral side of the spinal cord, brainstem, thalamus, and cortex.