GENERATION OF NEURONAL DIVERSITY IN THE SPINAL CORD AND HINDBRAIN

GENERATION OF NEURONAL DIVERSITY IN THE SPINAL CORD AND HINDBRAIN

Morphogenesis ultimately reflects the establishment of distinct cell classes in appropriate numbers and positions throughout the neural tube. In the spinal cord and hindbrain, the basic relationships between neural stem cells and their progeny are well established. These relationships define cell lineages, broadly, for the spinal cord and hindbrain. The key distinctions that establish lineages the range of cell types generated by specific classes of neural stem cells are position in the neural tube of the stem cells and the way in which postmitotic progeny reach their final destination.

The neural stem cells in the spinal cord and hind brain can be divided into four broad classes: motor neurons and related interneuron progenitors, sensory relay neurons and related interneuron progenitors, glial cell progenitors, and neural crest progenitors. There are key distinctions for each of these four classes. The first two stem cell classes, motor and sensory progenitors, have the capacity to give rise to both projection neurons with long axons that connect either the spinal cord with muscles and autonomic ganglia (motor) or send their axons from the spinal cord to higher brain regions to relay sensory information (sensory). These stem cells can also give rise to multiple classes of interneurons, whose axons remain in close proximity to the position of the interneuron cell body and which tend to establish inhibitory control for motor or sensory projection neurons. For these classes of stem cells (and the related intermediate progenitors), most cell division happens in the ventricular/marginal zone. The newly generated neuroblasts are then displaced over small distances so that they acquire an appropriate position in the dorsal or anterior horn. In the hindbrain, there is some local cell migration between distinct anterior-posterior locations (defined by the segmental organization of rhombomeres that prefigures the morphogenesis of the hindbrain) that leads to greater diversity of cells within cranial nerve motor or sensory relay nuclei. The third class of stem cells gives rise to the glia in the spinal cord and hindbrain. These stem cells are indistinguishable from the neurepithelial progenitors that give rise to neurons, and indeed they are mostly multipotent: they give rise to neurons as well as glial cells. 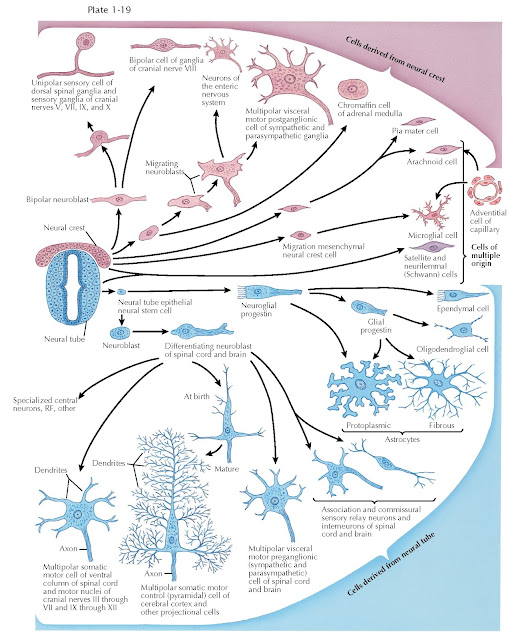 The specification and subsequent generation and differentiation of glial progeny are distinct from those of neurons. For the most part, the three primary classes of glia—astrocytes, oligodendroglial cells (see below), and radial glia are generated later than the neurons of the spinal cord and hindbrain. Astrocytes are further differentiated into two classes: (1) protoplasmic astrocytes, which are found primarily adjacent to neuronal cell bodies and their processes, where they collectively constitute the neuropil (gray matter), and (2) fibrous astrocytes, which are found primarily in axon tracts (white matter) and whose processes often contact blood vessels. Radial glial resemble neuroepithelial progenitors, and indeed may be indistinguishable from these cells in many ways. A small number of radial glial cells remain in the mature ependymal zone in many regions, and these cells, when placed in appropriate cell culture conditions, can generate neurons as well as astrocytes and oligodendroglial. Thus the radial glia seem to either be neural stem cells or at least retain neural stem cell capacity that can be expressed under distinctive experimental conditions.  Oligodendroglial cells interact with axons to generate the myelin sheaths that ensure efficient conduction of action potentials (see Plate 1-19). Oligodendroglial precursors initially are generated at the anterior midline and rely on some of the same secreted signaling molecules and transcription factors that also influence motor neuron determination and differentiation. Subsequently, however, oligodendroglial precursors are found throughout the developing and mature brain, and they can either retain their progenitor capacity (and in some cases, when isolated and cultured, can give rise to neurons as well as glia) or they can generate local myelinating oligodendroglia.

The fourth class of neural stem cell generated from the neural tube that gives rise to the spinal cord and hindbrain is the neural crest progenitor. As mentioned above, these stem cells either generate intermediate progenitors that then give rise to postmitotic migrating neuroblasts that actively move, or migrate, short distances from the neural tube and then reaggregate to form the sensory ganglia, including posterior root ganglia and most of the cranial nerves. Some sensory ganglion cells have a single cell body with a single process that bifurcates into a peripheral receptor process and central presynaptic process. This polarity facilitates generating receptor potentials in the periphery that also initiate action potentials that are conducted toward the CNS, where sensory information is then relayed via synapses made by the central process of the sensory ganglion cell. The neural crest also generates a truly bipolar sensory ganglion cell, the bipolar sensory ganglion cells of the spiral ganglion (auditory), or Scarpa’s ganglion (vestibular). These neurons have a distinct post- synaptic process that receives synapses from auditory or vestibular hair cells and a central process that relays sensory information by making synapses made in the cochlear nucleus or vestibular nucleus in the hindbrain. The neural crest–derived neuroblasts also coalesce to form the autonomic ganglia of the sympathetic chain as well as the more widely distributed parasympathetic ganglia. Finally, neural crest–derived neuroblasts give rise to the neurosecretory adrenal chromaffin cells found in the adrenal medulla. The neural crest also gives rise to significant populations of migrating progenitor cells that divide further at their destinations. These include mesenchymal neural crest cells that populate the head and craniofacial primordia and give rise to the meninges (arachnoid, pia, and dura), some local blood vessel– associated cells, and multiple skeletal elements, including teeth and cranial bones. In addition, pigment cells in the epidermis are derived from migratory neural crest progenitors. Finally, the major class of peripheral glial cells, the Schwann cells, which have characteristics similar to oligodendroglia in the CNS, is derived from the neural crest.