ESTABLISHING CELLULAR DIVERSITY IN THE EMBRYONIC BRAIN AND SPINAL CORD

ESTABLISHING CELLULAR DIVERSITY IN THE EMBRYONIC BRAIN AND SPINAL CORD 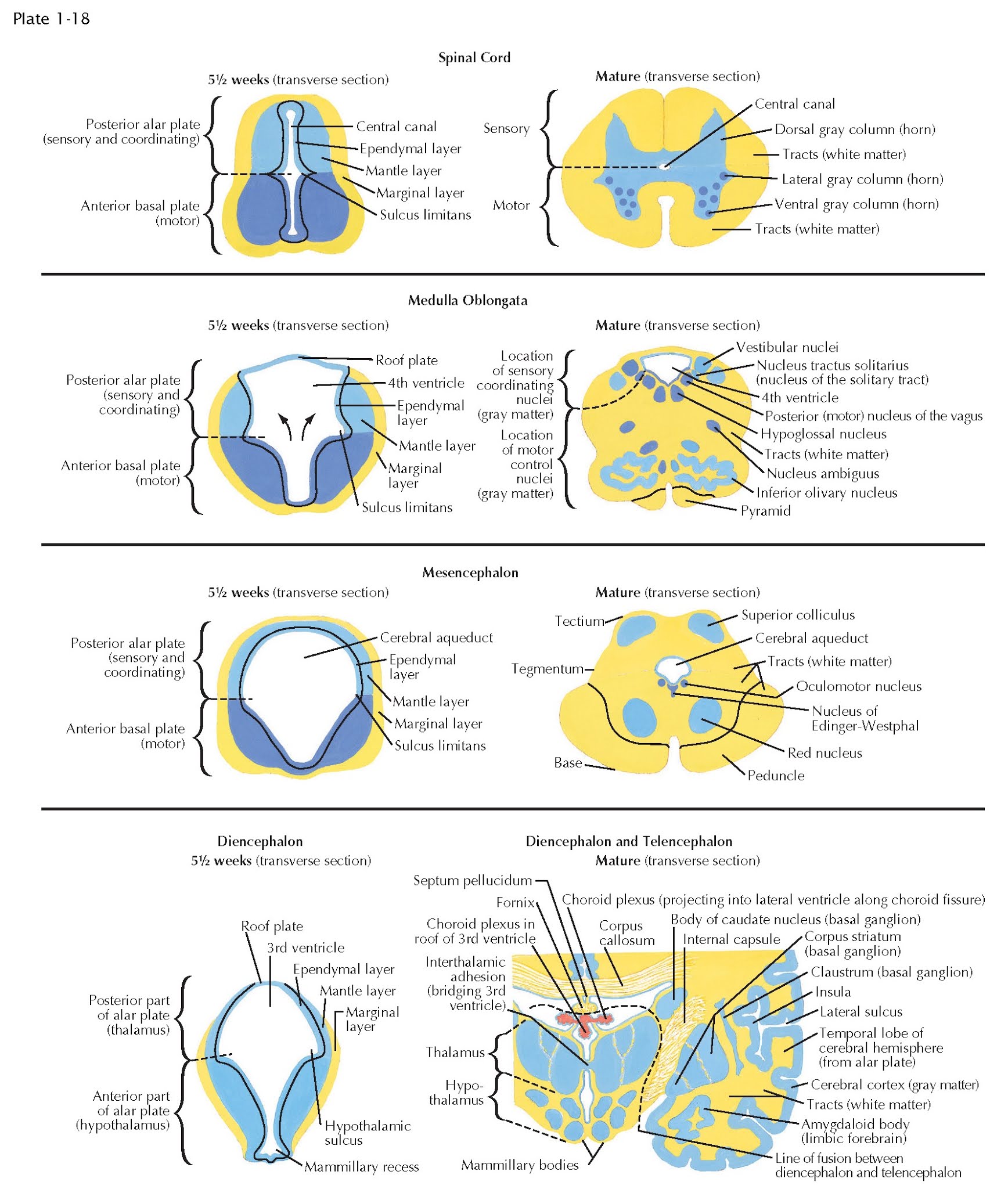 The morphogenetic transformation of the embryonic brain from a neural tube during the early first trimester to an organ that resembles the adult brain by the end of gestation is ultimately driven by ongoing stem cell proliferation, neurogenesis, and differentiation. This “histogenesis” depends on the specification and accumulation of neural stem cells with distinct capacities to generate diverse classes of neurons and glial cells. Subsequently, these stem cells, based on their position in the anterior-posterior as well as posterior-anterior axes of the neural tube and their access to both local and circulating signals, establish identity that is maintained in their postmitotic progeny. Thus the position of neural stem cells is a key determinant of the ultimate organization of each brain region. This relationship can be used to understand the basic adult organization of the entire central nervous system.

Neural stem cells that give rise to mature brain neurons and glia, with few exceptions, comprise a layer of cells that lines the ventricular space of the neural tube throughout its entire anterior-posterior extent. This layer, known either as the ependymal layer or ventricular zone of the developing neuroepithelium is usually the unique province of true neural stem cells: the proliferative cells in the nervous system that divide symmetrically and slowly to yield additional stem cells that have the capacity to generate all of the cell types in that region. A distinct type of proliferative cell, the intermediate or transit amplifying progenitor, is found in the mantle layer (also known as the intermediate zone). In addition, many newly postmitotic neurons are also found in the mantle layer. Finally, the outermost region of the neural tube epithelium is referred to as the marginal layer, or zone. The marginal zone has some post-mitotic neurons and glia and some nascent axonal and dendritic processes from local differentiating neurons. In the spinal cord and hindbrain (medulla and mesencephalon), the marginal zone is also usually the site of axon pathways that grow from other regions of the brain to innervate local target neurons. Thus these three neuroepithelial layers ependymal/ventricular, mantle/ intermediate, and marginal maintain local neural stem cells, facilitate neurogenesis, and support initial neuronal differentiation. The mantle and marginal zones are also important for support of initial neuronal differentiation and establishing initial connections between local dendrites and local or long-distance axons.

The neural tube also acquires regional distinctions in the posterior-anterior axis that reflect the ultimate division of the spinal cord, hindbrain, mesencephalon, and diencephalon into sensory and motor regions that either receive inputs from peripheral receptors (sensory) and relay this information to additional brain regions, or send axons to skeletal muscles or autonomic ganglia to regulate behavior and homeostasis. From the most posterior aspect of the spinal cord through the anterior end of the diencephalon, the neural tube becomes divided into posterior or alar and anterior or basal plates. These zones are distinguished from one another by a local groove, called the sulcus limitans, that indents the ependymal/ventricular zone. Through-out the entire extent of the posterior or alar plate, neurons are generated that become targets for sensory afferent axons from the periphery or that relay sensory information from other brain centers. Thus in the spinal cord, the medulla, the mesencephalon, and the diencephalon, posterior plate derivatives become sensory relay zones or distinct sensory relay nuclei. In the spinal cord, the sensory relay zone is referred to as the posterior horn and eventually becomes highly laminated in register with different classes of sensory input. In the medulla, the posterior plate gives rise to sensory coordinating, or relay nuclei for the cranial nerves. In the mesencephalon, the posterior plate gives rise to the superior and inferior colliculi, which receive input either directly from the eye (superior) or indirectly from the auditory nerve (inferior). These two nuclei are crucial for integrating sensory information with the initiation of motor commands. Finally, in the diencephalon, the posterior plate gives rise to all of the thalamic sensory coordinating, or relay nuclei for the senses: vision (lateral geniculate nucleus), audition (medial geniculate nucleus), somatosensation (anterobasal complex), taste (anterobasal complex), and olfaction (medioposterior nucleus). Throughout the posterior region of the spinal cord, medulla, mesencephalon, and diencephalon, the mantle zone becomes the location of axon tracts that carry sensory afferent axons.

In parallel with the differentiation of the posterior/ alar plate, the anterior/basal plate yields groups of neurons whose axons project directly to striated muscles (skeletal motor neurons), autonomic ganglia (preganglionic motor neurons), cranial muscles largely derived from the neural crest (cranial motor neurons), or whose axons project to skeletal, preganglionic, or cranial motor neurons to provide CNS regulation of their commands to the peripheral muscles and glands. The position of various anterior plate derivatives along the anterior-posterior axis, from the spinal cord, through medulla and mesencephalon, through the diencephalon, determines the type of motor neuron that is generated.Thus throughout the entire spinal cord, most of the motor neurons in the anterior horn or column are skeletal motor neurons. In addition, in the thoracic spinal cord, preganglionic motor (or visceral) neurons are generated in the lateral horn, approximately in the region of the sulcus limitans. In the medulla, there are a variety of cranial motor nuclei that have cranial motor nerves that project to the muscles of the head and neck, the jaws, the tongue, and the eyes. In the mesencephalon, there are a number of tegmental nuclei that influence motor function (including the ventral tegmental area, or VTA, which has dopaminergic neurons), as well as the red nucleus, whose neurons project to skeletal motor neurons that regulate, among other things, gross arm movements. Finally, the basal plate of the diencephalon becomes a collection of motor control nuclei of the hypothalamus that project to preganglionic, visceral motor neurons that regulate a broad range of homeostatic and reproductive functions. The mantle zone of each region of the anterior plate develops into distinctive axon tracts that primarily carry axons of motor control neurons that project from higher centers (like the mesencephalon or hypothalamus) to motor neurons in the medulla and spinal cord.

Thus based on the position of neural stem cells in the ependymal/ventricular layer of the entire rudimentary spinal cord, medulla, mesencephalon, and diencephalon, there is an orderly specification of distinct sensory and motor neurons that serve distinct regions of the body: the trunk, limbs, and viscera for the spinal cord; the head, neck, and viscera for the medulla; mesencephalon, and diencephalon. This consistent specification relies on the establishment of centers that provide molecular signals to the posterior/alar and anterior/basal plate from the posterior spinal cord through the anterior mesencephalon. At the anterior midline is the floor plate, a thin region of neuroepithelial cells that secretes the key signaling molecule sonic hedgehog as well as several other signals to establish motor neuron identity. At the posterior midline is the roof plate, which provides signals that similarly influence the genesis and differentiation of sensory neurons. These include bone morphogenetic proteins (BMPs), wingless/integration (WNT) signals, and retinoic acid. Accordingly, the basic neuroanatomic and functional organization of the spinal cord, medulla, mesencephalon, thalamus, and hypothalamus reflects the developmental position and molecular signaling history of neural stem cells that generate the neurons of each brain region.