The developing brain is sensitive to essential physiologic mechanisms that maintain homeostasis. Regulation of oxygen availability is critical. Historically, cerebral palsy (CP) was used to describe a static, nonprogressive motor disability present at birth secondary to perinatal cerebral hypoxic and traumatic injuries. Currently, CP also encompasses other acquired nonprogressive motor disabilities and is distinct from progressive neurodegenerative processes. Although nonprogressive in the sense of deterioration, CP is not static in evolution. Individuals may display several different types of CP. Cerebral palsy is a descriptive diagnosis rather than an etiologic one. Clinically, CP manifests as motor defects that range in severity, Associated disorders include intellectual disability, epilepsy, visual and hearing difficulties, and orthopedic deformities. Other diagnoses should be excluded before CP is diagnosed.

Many children have CP related to birth trauma (see Plates 1-2 and 1-3) more attributed to hypoxic-ischemic encephalopathy (HIE). Low oxygen combined with impaired blood flow is particularly damaging. After resuscitation to overcome asphyxia, a brief (12-hour) period of stupor and hypotonia occurs before seizures and apnea. 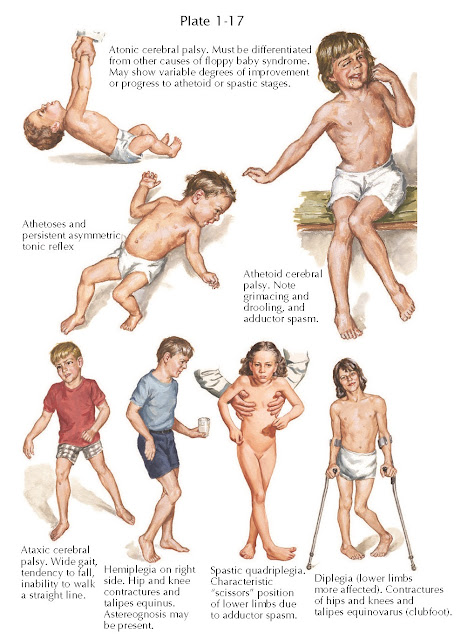 Watershed infarcts due to hypotension begin in the posterior parieto-occipital area and spread anteriorly and posteriorly. Watershed infarcts are most common in full-term infants and result in diplegia or hemiplegia. Perinatal telencephalic leukoencephalopathy is most common in premature infants and often affects the centrum ovale, where it disturbs nerve fibers supplying the legs and acoustic and optic radiations. Minor lesions lead to white matter atrophy, whereas more severe lesions appear cystic. Minor lesions can cause learning disabilities, with severe lesions causing diplegia.

The two main types of CP are spastic (pyramidal) and extrapyramidal. These classifications are based on the type and distribution of motor abnormalities, which are divided into subtypes.

Hemiplegia typically affects term infants, with most causes arising from maldevelopment and neonatal stroke. A hypotonic limb is initially noted, with subsequent spasticity. Cortical sensory loss and hemianopsia may be present.

Quadriplegia, the most severe and common form, affects all infants with a range of etiologies, from hypoxic or traumatic perinatal cerebral injuries to developmental abnormalities. Although spastic quadriplegia is usually evident early, hypotonia may manifest initially. Individuals typically have severe comorbidities including epilepsy, intellectual disability, and pseudobulbar palsy.

Diplegia primarily affects the legs, causing spasticity with scissoring. This affects both term and preterm infants, in the latter, often associated with periventricular leukomalacia (PVL). Hand function and cognition are relatively intact.

Extrapyramidal cerebral palsy: Damage is typically to the subcortical areas responsible for movement coordination and balance. Unless severe, intelligence is spared. Usually all body regions are involved; thus subtypes are named according to the type of movement.

Ataxia affects term infants and can result in incoordination, hypotonia, or spasticity.