Women in the United States have the highest incidence rates of breast cancer in the world. Worldwide, breast cancer is the second most common type of cancer after lung cancer (10.4% of all cancer incidence, both sexes counted) and the ﬁfth most common cause of cancer death. Approximately one-third of all forms of female carcinoma arise in the breast, and more than three- quarters of these are the inﬁltrating scirrhous type or lobular carcinoma. Breast cancer accounts for approximately 18% of cancer deaths and results in about the same number of deaths per year as auto accidents. The peak incidence is above 40 years of age; with 85% occurring after 40 and 75% after 50. Approximately 5% to 10% of breast cancers have a familial or genetic link. The symptoms that bring the patient under examination are the discovery of the lump (55% to 65% of cases), its increasing size, occasional ﬂeeting pains or tenderness, and changes in the skin or nipple. Approximately 60% of palpable tumors are located in the upper outer quadrant of the breast. An abnormal mammogram without a palpable mass is the second most common cause for diagnosis (35%). One quarter of all breast cancers are found during routine examination.

The major clinical ﬁndings on examination are the presence of a single lump in a breast otherwise normal to palpation in a patient more than 35 years old; the hard and irregular feeling of the tumor; the apparent nearness of the tumor to the examining ﬁngers because of atrophy of overlying fat; the restricted mobility of the mass; and ﬂattening or retraction of the skin or nipple on the affected side when arms or breast are manipulated. Excisional biopsy with or without radio- graphic control provides the only deﬁnitive diagnosis. 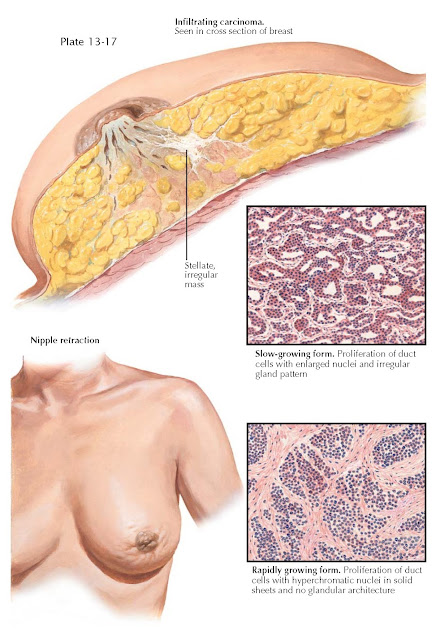 Grossly, mammary carcinoma is a dense, yellowish-white, stellate, indurated mass with a cut surface that is gritty and concave and that feels like an unripe pear. Unless secondarily infected, the growth is usually free of necrosis. It inﬁltrates the surrounding fatty and ﬁbrous stroma of the breast. Microscopically, the tumor cells are of moderate size, with prominent hyperchromatic nuclei. The cells grow in small nests or in cords with prominent intervening ﬁbrous tissue. In the more slowly growing cancers, the cells grow in scattered masses and tend to form acinar or tubular structures. In those more rapidly growing, the cells are scattered individually without histologic resemblance to normal structure.

The most common breast cancer histology is the inﬁltrating ductal carcinoma, accounting for about 75% of breast cancers. Scirrhous carcinoma is the most common subtype: well-demarcated hard nodules consisting of cords and nests of malignant ductal cells characterize it. Medullary and mucinous forms are also recognized.

At one time, radical mastectomy was the treatment of choice, yielding 70% 5-year survival if the axillary lymph nodes were uninvolved and 20% if there was lymph node involvement. This has given way to a much more nuanced approach that is dependent on a number of factors: the tumor’s size; its inherent aggressiveness, as determined by the histology of the initial lesion; the presence of positive nodes; and the receptor status of the tumor. The major impetus for changes in management of breast carcinoma over the past two decades has come from a changing view regarding the biology of the disease. It has become apparent that many women with breast cancer have systemic disease at the time of initial diagnosis. The natural history of the developing breast carcinoma, with an average doubling time of 100 days, results in years of growth before its clinical discovery. Because occult vascular dissemination is likely to occur prior to diagnosis, treatment of breast carcinoma now relies upon both local and systemic therapy, without reliance on radical surgery.