The two main types of breast adenocarcinomas are ductal carcinomas (85%) and lobular carcinomas. Based on the tumor’s histology, these are also sometimes classed as papillary adenocarcinomas; carcinomas with gelatinous, mucoid degeneration; or as a kind of intraductal carcinoma that forms plugs in preexisting ducts and circumscribed rings of carcinoma cells. These forms of circumscribed adenocarcinomas bulge out-wardly from the chest wall rather than retract inwardly as in the inﬁltrating form. Skin adherence or ulceration and axillary node involvement occur much later in the course of the disease than in the ordinary scirrhous form. The tumors progress slowly to an immense size. The most common type of adenocarcinoma is ductal carcinoma, which begins in the cells of the ducts. Lobular carcinoma begins in the lobes or lobules and is more often found bilaterally than are other types of breast cancer. The cancer is classiﬁed based on the predominant histologic cells; however, several cellular patterns may be found in any one tumor. 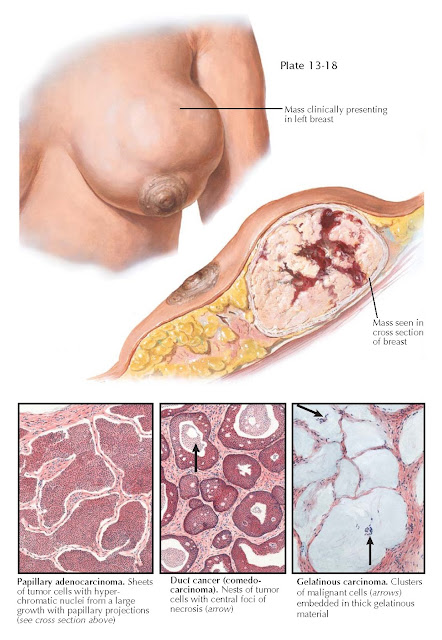 In cases of inﬁltrating ductal carcinoma, nonuniform malignant epithelial cells of varying sizes and shapes inﬁltrate the surrounding tissue. The degree of ﬁbrous response to the invading epithelial cells determines the ﬁrmness to palpation and texture during biopsy. Often the stromal reaction may be extensive. Approximately 10% of inﬁltrating ductal carcinomas are of a uniform histologic picture and are classiﬁed as medullary, colloid, comedo, tubular, or papillary carcinomas. In general, the specialized forms are grossly softer, mobile, and well delineated. They are usually smaller and have a more optimistic prognosis than the more common heterogeneous variety. Medullary carcinomas are soft, with extensive stromal inﬁltration by lymphocytes and plasma cells. Colloid or gelatinous carcinomas have a similar soft consistency, with extensive deposition of extracellular mucin.

Inﬁltrating lobular carcinomas are histologically notable for the uniformity of the small, round neoplastic cells. Histologic subdivisions of inﬁltrating lobular carcinoma include small cell, round cell, and signet cell carcinomas. Often the malignant epithelial cells inﬁltrate the stroma in a single ﬁle fashion. This cancer tends to have a multicentric origin in the same breast and to involve both breasts more often than inﬁltrating ductal carcinoma. On palpation, these growths feel boggy and semimovable and are dependent and heavy when the breast is moved upward. The papillary carcinomas may contain a cystic cavity with blood. The intraductal carcinomas form plugs (comedones), which may be expressed from the ducts. On cross section the gelatinous carcinomas contain a characteristic slimy, gray, mucoid material that spills from the tumor, which is honeycombed with this substance.