Inﬂammatory or acute carcinoma, formerly designated as carcinomatous mastitis, is more often observed in patients with obese breasts or during pregnancy and lactation, from which is derived another older term, lactation cancer. Inﬂammatory carcinomas comprise approximately 1% to 5% of all breast cancers. This form is recognized clinically as a rapidly growing, highly malignant carcinoma, with inﬁltration of malignant cells into the lymphatics of the skin, which pro- duces a clinical picture that simulates a skin infection. There is not a speciﬁc histologic cell type. In the TNM staging system for breast cancer, inﬂammatory cancer has its own classiﬁcation, T4d, and by deﬁnition, is staged as stage IIIb or above. (Stage IIIB breast cancers are locally advanced; stage IV breast cancer is cancer that has spread to other organs.) Because of the rapid growth of these tumors, the physical appearance of the breast is often different from that of patients with other stage III breast cancers. 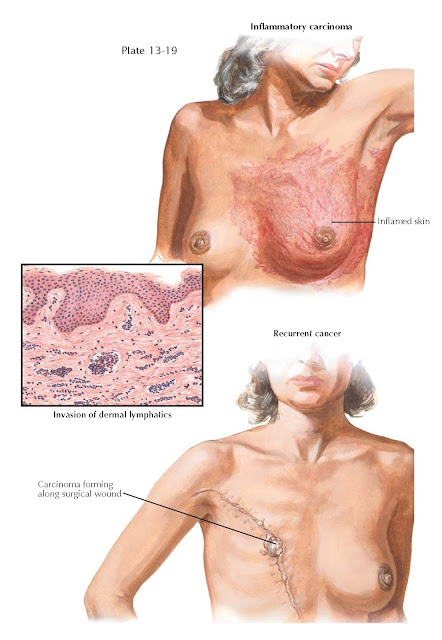 The appearance of a rapidly widening area of inﬂamed skin usually occurs early in the disease and may precede the discovery of the underlying tumor. The dermal spread is caused by retrograde extension of the cancer cells through the lymphatics of the skin. The majority of cases are of the primary form, that is, when the patient has noted a small tumor in the breast or axilla only a few weeks prior to the appearance of inﬂammatory signs. The presence of the tumor in the secondary form antedates the skin inﬂammation by months. The tumor might already have reached a large size, or the skin changes may fall upon a mastectomy scar. The changes in the skin are characterized by a reddish or purplish discoloration and edema producing the characteristic orange peel effect. Multiple small nodules may also be present. The inﬂamed discoloration may extend up the neck and down the arm on the affected side, or across to the opposite breast and shoulder. A low-grade fever, enlarged axillary nodes, and an elevated leukocyte count, which may reach 15,000, accompany the carcinomatous invasion of the skin. Adenopathy may extend to the groin, and the skin over the abdomen may be inﬂamed; hence the term erysipeloid cancer has also been used. In a typical case the symptoms are usually less than 4 months in duration. Treatment consists of chemotherapy, targeted surgery, radiation therapy, and hormonal therapy, but 5-year survival is only in the range of 25% to 50% with recurrences common. This is signiﬁcantly lower than for patients with other types of breast cancer. Chemotherapy is generally the ﬁrst treatment followed by targeted surgery. Additional treatments may include additional chemotherapy, hormonal therapy, or the recently added modality of special targeted therapy (such as trastuzumab) for patients whose tumors overexpress the HER-2 tumor protein.

Tissue sections through a region with inﬂammatory cancer exhibit relatively few signs of acute inﬂammation. The paramount characteristic is the blockage of lymphatics and superﬁcial blood vessels with invading cancer cells. This same metastatic process into the sub-cutis is seen in preparations from a lenticular cancer, or carcinoma en cuirasse, where the invasion proceeds more slowly, more diffusely, and without edema.