Approximately 5% to 10% of breast cancers have a familial or genetic link. In these families, breast cancer tends to occur at a younger age and there is a higher prevalence of bilateral disease. The association between inherited breast and ovarian cancer has lead to the term hereditary breast ovarian cancer syndrome (HBOC).

Hereditary breast ovarian cancer syndrome is characterized by an early age of onset of breast cancer (often before age 50). In affected families, there is a family history of both breast and ovarian cancer and an increased chance of bilateral cancers or an individual with both breast and ovarian cancer. Pedigrees will demonstrate an autosomal dominant pattern of inheritance (vertical transmission through either the mother’s or father’s side of the family). Members of these families also have an increased incidence of tumors of other organs, such as the fallopian tube or prostate. Families with cases of male breast cancer and families of Ashkenazi Jewish ancestry are at increased risk for this syndrome (greater than 10-fold increase). 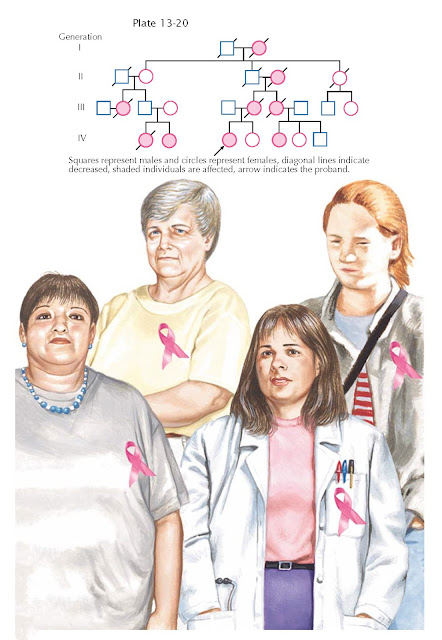 At least two genes have been found in which mutations can cause this pattern of inherited breast and/or ovarian cancer. It appears that germline mutations of the BRCA1 tumor suppressor gene on chromosome 17q are responsible for a large proportion of these hereditary cancers. However, not all families in which hereditary breast or ovarian cancer is suspected are found to have mutations in either BRCA1 or BRCA2. Having a single mutation in one of these genes does not appear to be sufﬁcient to have a tumor develop. It is generally thought that mutations in both alleles, due to chemical, physical, or biologic environmental expo- sures, or chance errors in cell replication, must occur for tumor development. To date, hundreds of unique mutations have been identiﬁed in both BRCA1 and BRCA2, most due to sporadic mutations unique to the individual or family. Speciﬁc recurring mutations have been found in individuals of Ashkenazi Jewish descent and persons from the Netherlands, Iceland, and Sweden. Mutations in the BRCA family of genes confer a lifetime risk of breast cancer that approaches 85%, though the risk of ovarian cancer is variable depending on the location of the mutation. The average lifetime risk of ovarian cancer is approximately 40% to 50%.

Presently, management recommendations for women with BRCA mutations vary from earlier and increased interval screening tests to prophylactic measures such as chemoprevention with tamoxifen, mastectomy, and oophorectomy. A task force has recommended breast self-examination beginning by age 20, annual or semi-annual clinical examination beginning at ages 25 to 35 years, and annual mammograms beginning at ages 25 to 35 years. They made no recommendation for or against prophylactic surgery in these patients. Although there is good evidence suggesting that tamoxifen can signiﬁcantly reduce the risk of breast cancer in women at high risk, there are still no conclusive data on the use of tamoxifen in a population of patients with a BRCA gene mutation. There are currently no effective screening techniques for the early detection of ovarian cancer. For this reason, some women at high risk choose to undergo prophylactic oophorectomy.