PAGET DISEASE OF THE NIPPLE

PAGET DISEASE OF THE NIPPLE

Paget disease of the breast is rare, comprising between 1% and 2% of breast carcinomas. It is a malignant process that involves the nipple and areola. Rarely, it may also involve the skin of the vulva. This lesion has an innocent appearance that looks like eczema or dermatitis of the nipple. The clinical picture is produced by an inﬁltrating ductal carcinoma that invades the epidermis. Paget disease has an excellent prognosis.

Paget carcinoma is characterized by invasion of the nipple or areola and the mouths of the larger ducts by large malignant cells resembling those seen in transitional cell carcinoma of the mucous membranes else-where in the body. It is thought to arise in the dermoepidermal junction from multipotent cells that can differentiate into either glandular or squamous cells. The average age at diagnosis is 62 for women and 69 for men. The duration of symptoms, which is approximately 3 years, and the symptoms, referable to the nipple, are characteristic clinical features of the disease. Paget disease is almost always associated with inﬁltrating or intraductal carcinoma in deeper parts of the breast (95% of cases). In most of the cases, involvement of the nipple precedes a deﬁnite tumor of the breast, but in a few instances the lump in the breast may be noted ﬁrst. The disease is bilateral in less than 5% of the cases. Mammography is usually used to detect deeper lesions and lesions in the contralateral breast. In addition, a touch smear obtained by softening the crust with saline and gently scraping the surface often demonstrate the characteristic Paget cells. 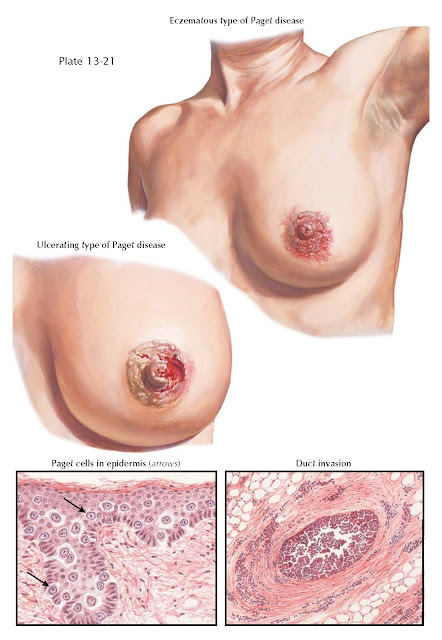 The involved nipple has either a red granular appearance or is crusted and eczematous. After an interval of a few months, both the eczematous and the granular types undergo ulceration. Serum or blood oozes from the denuded region. A small amount of blood may be obtained on manipulation. In early stages, the zone immediately surrounding the nipple is indurated, whereas in later stages both the central zone and the periphery may be involved by a hard mass. Palpable axillary nodes are found in about 50% of the cases.

Grossly, besides the changes in the nipple, the larger ducts are dilated and ﬁlled with blood or inspissated secretion. Microscopically, large cells with deep staining or vesicular nuclei and pale-staining cytoplasm are found in the epidermis of the nipple. Mitotic ﬁgures are frequent. Dermal inﬁltrates of large neoplastic cells (Paget cells) are deﬁning features of this condition. These cells have abundant clear cytoplasm with mucin and irregular prominent nucleoli. Most often, these cells arise from inﬁltrating ductal carcinoma. In cases where the cells in the nipple have inﬁltrated beyond the basement membrane, they invade both the larger ducts and the breast tissue.

Therapy is focused on treatment of the underlying malignancy and is most commonly surgical. When limited to the nipple, breast conservation may be possible. Adjunctive hormonal or chemotherapy is often recommended based on cell type and stage. Radiation therapy is a common adjuvant therapy following breast-conserving surgery.

The differential diagnosis from benign lesions of the nipple, such as keratosis and ulcers, depends largely on the discovery of a mass in the underlying tissue on palpation. Although biopsy of the nipple should be avoided whenever possible, a study of the tissue becomes imperative in certain cases, for example, when the skin lesion does not heal within a matter of days under hygienic measures or on application of petrolatum. Even if the gland does not appear to be involved, it is important that the biopsy specimens obtained from such patients should contain not only skin b t also a representative portion of the mammary ducts.