Lymphogranuloma venereum (LGV) is a sexually transmitted disease (STD) that is produced by infection with Chlamydia trachomatis serotypes L1, L2, and L3. The disease progresses through three distinct phases of transmission. This bacterial disease was once limited to tropical regions, but with the ease of worldwide travel, it can now be seen globally. The skin manifestations are found predominantly in the groin and genital region. This disease is often seen in conjunction with other STDs, and screening for other STDs should be done routinely in patients diagnosed with LGV.

C. trachomatis has also been shown to be responsible for many infectious complications, including pneumonia, urogenital infections, conjunctivitis, and trachoma. Trachoma, which often starts as conjunctivitis, results in chronic intense inflammation of the bulbar and eyelid conjunctiva that causes scarring and eventually blindness if left untreated. Trachoma and conjunctival disease are caused by the A, B and C serotypes of C. trachomatis. 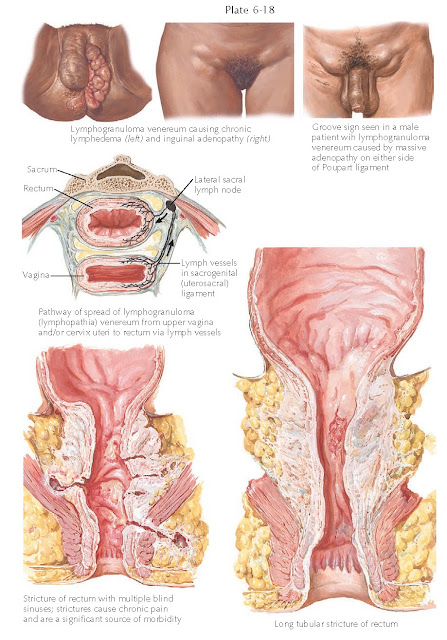 Clinical Findings:  LGV is a rare disease in the United States and Europe but should be considered in the differential diagnosis of all anogenital ulcerations. The disease is seen more frequently in patients with a low socioeconomic status and in those with multiple sexual partners. LGV is passed from one individual to another via sexual intercourse. After a short incubation period (a few days to a few weeks), a painless papule forms and ultimately ulcerates. The ulcer is small (≤1 cm in diameter) and without induration. This ulceration is often described as painless, but it causes the patient irritation and discomfort with pressure and manipulation. This primary stage of the disease spontaneously resolves without therapy. The ulcer heals, leaving only a slight scar.

The secondary stage of disease begins with inguinal adenopathy. The inguinal lymph nodes become enlarged and painful. Initial involvement occurs within 2 to 3 weeks after healing of the ulcer and typically results in discrete, painful lymph nodes on each side of the inguinal crease. The lymph nodes coalesce over time and mat together into a large mass of tissue called buboes. If both sides of Poupart’s ligament are involved, this can lead to a characteristic clinical finding named the groove sign. This name denotes the massive adenopathy on each side of Poupart’s ligament; the groove is the area overlying the ligament with no adenopathy. The massive adenopathy may become necrotic, and suppurative lymph nodes are frequently seen. Sinus tracts from the adenopathy to the surface of the skin form and drain. This second stage is associated with fever and constitutional symptoms.

The third stage or late stage of LGV is less frequently seen and consists of scarring and fibrosis as well as elephantiasis of the genitals. If the primary and secondary diseases have affected the rectum, rectal fissures and strictures may be present, leading to chronic pain. Rectal disease is most frequently encountered in the male homosexual population.

Pathogenesis: C. trachomatis is a gram-negative obligate intracellular bacterium. It is unique in that it has no ability, or only limited ability, to produce its own adenosine triphosphate (ATP) energy source. This inability to create a steady source of energy forces the bacterium to reside within a host cell. The infectious form of the bacterium, called the elementary body, gains entry into a host cell. Within the cell, it forms a larger, actively reproducing reticulate body. The reticulate body undergoes binary fission to produce progeny (elementary bodies), which are then released from the cell to infect other cells or hosts.

Histology: A skin biopsy of a primary ulcer of LGV shows epithelial necrosis with a mixed, nonspecific inflammatory infiltrate. There are no pathognomonic histological findings in LGV. A tissue culture (McCoy cell culture) is the only reliable means of diagnosis. The finding of iodine-staining, glycogen-containing inclusion bodies is sensitive and specific for the presence of C. trachomatis. Various serological tests are available, but they cannot reliably differentiate between past and present disease.

Treatment: The routine application of erythromycin to the eyes of newborns has dramatically decreased the risk of trachoma. LGV is treated with oral antibiotics in the tetracycline or erythromycin class. All sexual partners should also be treated, even if they do not exhibit overt signs of disease.