BLOOD SUPPLY OF THE HEART


The normal heart and the proximal portions of the great vessels receive their blood supply from two coronary arteries. The left coronary artery (LCA) originates from the left sinus of Valsalva near its upper border, at about the level of the free edge of the valve cusp. The LCA usually has a short (0.5-2 cm) common stem that bifurcates or trifurcates. One branch, the anterior inter- ventricular (descending) branch, courses downward in the anterior interventricular groove (largely embedded in fat), rounds the acute margin of the heart just to the right of the apex, and ascends a short distance up the posterior interventricular groove.

One septal branch originating from the upper third of the anterior interventricular branch is usually larger than the others and supplies the midseptum, including the bundle of His and bundle branches of the conduction system. This branch also may supply the anterior papillary muscle of the right ventricle through the moderator band. The second, usually smaller circumflex branch of the left coronary artery runs in the left AV sulcus and gives off branches to the upper lateral left ventricular wall and the left atrium. The circumflex branch usually terminates at the obtuse margin of the heart, but it can reach the crux (junction of posterior inter-ventricular sulcus and posterior AV groove). In this case the circumflex branch supplies the entire left ventricle and ventricular septum with blood, with or without the right coronary artery.

In cases where the LCA trifurcates, the third branch, coming off between the anterior interventricular and the circumflex branches, is merely an LV branch that originates from the main artery.

The posterior papillary muscle of the left ventricle usually has a dual blood supply from both the left and the right coronary artery.

Of the right atrial branches of the right coronary artery, one is of great importance. This branch originates from the RCA shortly after its takeoff and ascends along the anteromedial wall of the right atrium. It enters the upper part of the atrial septum, reappears as the superior vena cava branch (nodal artery) posterior and to the left of the SVC ostium, rounds the ostium, and runs close to (or through) the sinoatrial node (see Plate 1-13), giving off branches to the crista terminalis and pectinate muscles. 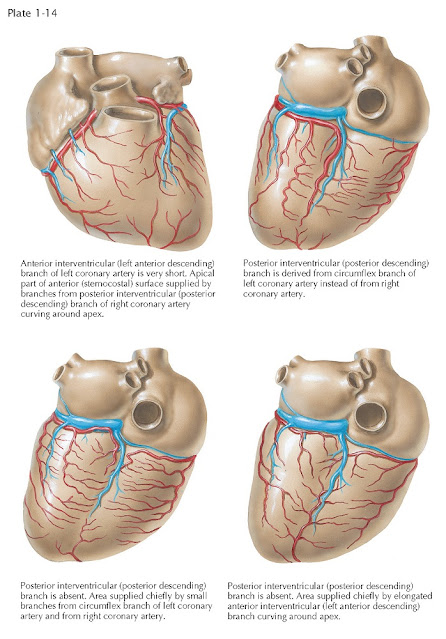 Also, the first branch of the RCA may originate independent of the right sinus of Valsalva rather than from the parent artery. Rarely, the second or even the third RCA branch arises independently.

Small venous systems in the atrial septum (and probably in ventricular walls and septum) enter the cardiac chambers directly, called the thebesian veins. The existence of so-called arterioluminal and arteriosinusoidal vessels is debatable and the evidence inconclusive.