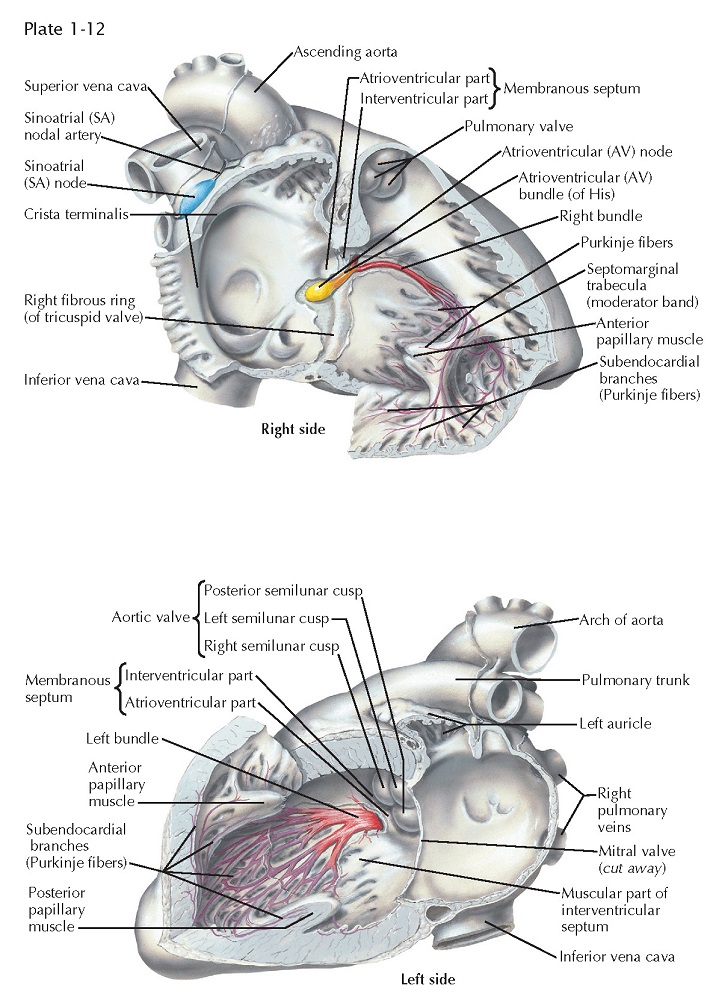 The specialized heart tissues include the sinoatrial (SA) node, atrioventricular (AV) node, common atrioventricular bundle or bundle of His, right and left bundle branches, and peripheral ramifications of these bundle branches, which make up the subendocardial and intra- myocardial Purkinje network. In addition, other fiber groups in the atria meet some of the histologic and electrophysiologic criteria for specialization. These tissues constitute Bachmann’s bundle and the inter- nodal conducting paths of the right atrium.

The body of the SA node is in the wall of the right atrium, at the junction between the atrium proper and the superior vena cava. At the lower end, the nodal fibers change and form the common bundle. The common bundle divides into right and left bundle branches, which extend subendocardially along both septal surfaces. The left bundle branch rapidly subdivides, forming a broad sheet of fascicles sweeping over the left interventricular septal surface. The right bundle branch extends for a distance without subdivision; one branch usually passes through the moderator band, and other parts extend over the endocardial surface of the ventricle. Peripherally, both bundle branches subdivide and form the subendocardial network of Purkinje fibers, which extend a variable distance into the ventricular walls and are in direct continuity with fibers of the ventricular muscle.

In definitive histologic studies of the human atrium, James demonstrated the existence of three discrete internodal paths and the relationship of one of these to Bachmann’s bundle. The anterior internodal tract leaves the head of the sinus node and spreads to the left, dividing to form two branches: One extends along the dorsal aspect of the interatrial band to ramify over the left atrium. This subdivision constitutes the specialized fibers of Bachmann’s bundle. The other branch curves across the interatrial septum to the region of the AV node, where it merges with fibers from other nodal tracts. The middle internodal tract leaves the posterodorsal margin of the sinus node and crosses the interatrial septum to merge at the AV node with other specialized atrial fibers. This tract corresponds to the bundle described by Wenckebach. The posterior internodal tract extends from the tail of the sinus node along the crista terminalis, through the eustachian ridge, the right superior margin of the AV node. A description of the interconnections of internodal tracts with the atrium and AV node follows.

Physiologic evidence suggests that the spread of the sinus impulse to the left atrium and from the sinus node to the AV node normally depends primarily on activation of the anterior internodal tract and Bachmann’s bundle. The physiologic significance of these tracts is also described here.

The only normal anatomic communication between the atria and ventricles of the mammalian heart is the atrioventricular node with the common bundle of His. On the atrial side, the AV node communicates with the atrium through the branched and interweaving fibers of the internodal tracts and perhaps through connections with ordinary atrial musculature. In addition, in studies of the canine AV node, fiber tracts appear to bypass the nodal body and connect with distal portions close to the junction of nodal fibers and the common AV bundle. Similar “bypass” fibers can be demonstrated in studies of the human AV node.