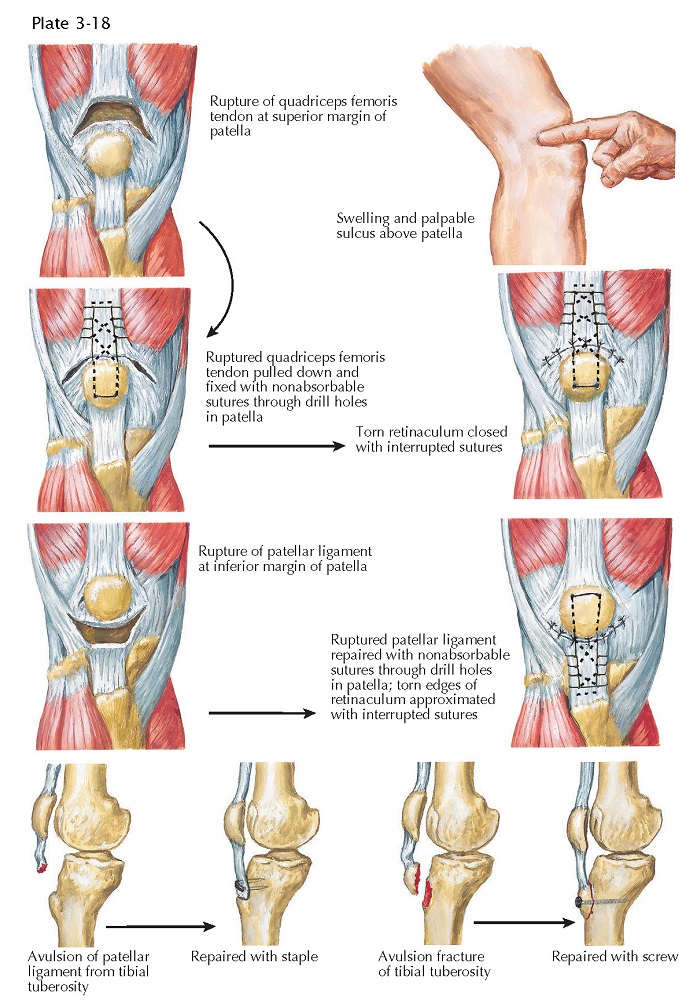 Damage to the quadriceps mechanism generally occurs when there is active contraction of the quadriceps femoris muscle against forced flexion of the knee. Most ruptures of this extensor mechanism occur in older patients. At the time of injury, the patient experiences sudden pain, which may be associated with a tearing sensation about the knee. The tendon may be weakened by age-related degenerative changes or by pathologic changes due to psoriatic arthritis, rheumatoid arthritis, arteriosclerosis, gout, hyperparathyroidism, diabetes, chronic renal failure, or corticosteroid therapy.

Physical Examination. Palpation of the knee often reveals a hematoma, which may make examination difficult. A high-riding patella may indicate rupture of the patellar ligament, whereas a patella that is riding lower than normal suggests a rupture of the quadriceps femoris tendon. A large defect may be palpable soon after injury, although if the ruptured ligament is not treated for weeks or months the sulcus may fill with scar tissue.

The most important finding during examination is the patient’s inability to actively extend the knee fully against gravity. Also, the patient may not be able to maintain a passively extended knee against gravity. Patients with rupture of the quadriceps femoris tendon or patellar ligament without involvement of the medial or lateral retinaculum may be able to extend the injured knee actively to within 10 degrees of full extension. When there is a widely separated tear of either tendon or ligament combined with involvement of the medial and lateral retinacula, active extension is very difficult. Patients with chronic rupture of the quadriceps femoris tendon complain of giving way of the knee and marked weakness on attempting active extension.

Imaging. Whereas physical examination is often sufficient to diagnose disruptions of the extensor mechanism, it is recommended to obtain plain radiographs to assess for fracture and patellar positioning. MRI may be performed to assess the involved soft tissues in detail, although this is not often necessary for these patients. Treatment. Rupture of the quadriceps femoris tendon generally occurs at its point of intersection into the superior pole of the patella, whereas rupture of the patellar ligament usually occurs at the inferior pole of the patella. In both cases, surgery is required to reestablish the continuity of the quadriceps mechanism. The tendon or ligament most often is reattached with sutures through drill holes in the patella. Then, the medial and lateral retinacula are sutured. After surgery, the knee is routinely immobilized in full extension for 6 to 8 weeks.

Patients who also have chronic metabolic disorders or receive long-term corticosteroid treatment may require a more complex repair that uses tendon, fascia, or wire to reinforce the damaged quadriceps mechanism. After postoperative immobilization for 8 to 10 weeks, patients gradually start protected range-of-motion exercises and should use a cane or walker for some time.