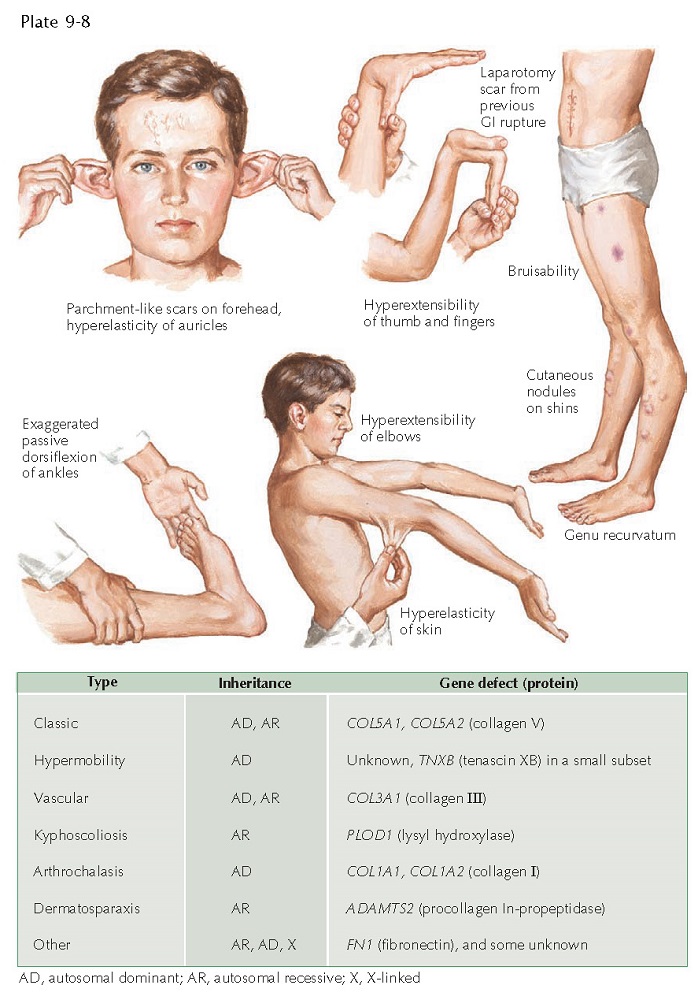 Ehlers-Danlos syndrome is a heterogeneous disease of defective connective tissue production. There are many subtypes, most caused by defects in collagen formation or in the posttranslational modification of collagen. This grouping of diseases has been confusing because of the variable nature of the subtypes and the lack of a universally adopted classification system. Under the most recent system, there are 7 distinct subtypes; under the historical classification, there were 11 types. The new classification system has not been universally adopted, which contributes to the confusion. As the genetic defects behind each subtype are determined, researchers and clinicians will gain a better understanding of the syndrome.

Clinical Findings: Ehlers-Danlos syndrome is a grouping of connective tissue diseases. Each subtype is distinct and has a unique underlying genetic defect. Taken as a whole, the syndrome is estimated to occur in approximately 1 of every 400,000 persons. Because of the variation in phenotypic expression, the syndrome is likely underreported. Most cases are termed classic Ehlers-Danlos syndrome (formerly designated types I and II). The onset of signs and symptoms occurs in early childhood and can even be manifested at birth. Each subtype has a different mode of inheritance. Most are inherited in an autosomal dominant manner, with autosomal recessive inheritance the next most prolific mode of transmission. X-linked inheritance has been described. Ehlers-Danlos syndrome affects males and females equally.

Cutaneous findings are seen in most subtypes of the syndrome. The skin when stretched is hyperextensible, but it recoils to its resting position promptly and entirely after being released. Easy bruisability and excessive scarring are noticed soon after the child begins to crawl. The scarring has a characteristic “fish mouth” appearance, in that the normally thin linear scars stretch abnormally and leave a profoundly wider scar than would have been predicted. The scar tissue is extremely thinned and can appear translucent. The underlying vasculature can be seen prominently through the atrophic skin, further worsening the appearance of the scar tissue. Molluscoid pseudotumors and calcified subcutaneous nodules (spheroids) occur along regions of repetitive trauma. Epicanthic folds and elastosis perforans serpiginosa are two cutaneous findings that can be seen in cases of Ehlers-Danlos syndrome. Rare occurrences of blue sclerae have been reported.

The major morbidity and mortality in Ehlers-Danlos syndrome is seen in the vascular subtype (type IV). Vascular-type Ehlers-Danlos is subdivided into three similar variants and is caused by a defect in the COL3A1 gene. The skin in this subtype is not hyperextensible but is rather translucent. Joint laxity is minimally present or not at all. Individuals with this subtype are more prone than others with Ehlers-Danlos syndrome to arterial aneurysms and rupture leading to death. Both large and medium-sized vessels are involved. The wall of the colon is easily ruptured, and abdominal pain in these patients can be an impending sign of colonic rupture.

Pathogenesis: Most forms of Ehlers-Danlos syndrome are caused directly by a genetic defect in collagen synthesis or indirectly by a defect in posttranslational modification of collagen. These defects lead to an abnormal amount as well as abnormal functioning of the underlying collagen and the properties it imparts to the connective tissue. The vascular subtype is caused by a defect in the COL3A1 gene that leads to minimal or no functional type III collagen. Because type III collagen is a critical component of the walls of the vasculature and colon, these structures are weakened and are prone to distention and breakage. Classic Ehlers-Danlos syndrome is caused by defects in the COL5A1 and COL5A2 genes that lead to defective type V collagen. Defects in the enzymes lysyl hydroxylase and procollagen peptidase, which are responsible for post-translational modifications of collagen, are present, respectively, in the kyphoscoliosis and dermatosparaxis subtypes of Ehlers-Danlos syndrome.

Treatment: Patients with Ehlers-Danlos syndrome need to be under the supervision of a pediatrician who understands the disease. Referral to tertiary care centers is an appropriate course of action. Patients need to avoid unnecessary trauma. They should refrain from contact sports. The orthopedic complications can be treated by an experienced orthopedic surgeon. Patients with vascular-type Ehlers-Danlos syndrome need to be monitored routinely by a cardiologist and a cardiothoracic surgeon. This subtype is the most difficult to manage because of its unpredictable nature.