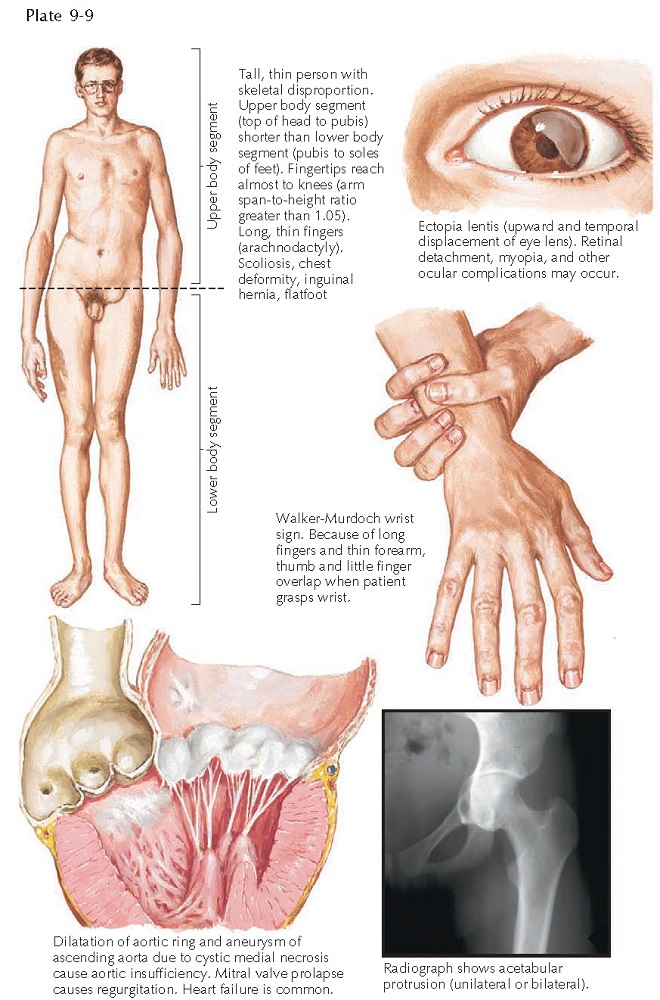 Marfan syndrome is an autosomal dominantly inherited disorder of connective tissue that is caused by a genetic defect in the FBN1 gene located on chromosome 15. The disorder leads to a defect in the fibrillin-1 protein, which is a component of the extracellular matrix of connective tissue. The defect leads to many clinical findings in the cardiovascular, ocular, skeletal, integumentary, and respiratory systems. The diagnosis is made based on multiple criteria that include major and minor features of the syndrome. Cardiovascular disease is a major cause of morbidity and mortality in this syndrome.

Clinical Findings: Marfan syndrome has an estimated incidence of approximately 1 per 7500 people. It affects all populations and has no gender differential. Many of the manifestations of the syndrome are present at the time of birth. As the child grows, the findings become more evident and the severity may worsen. The diagnosis of Marfan syndrome does not imply any specific prognosis, because the syndrome has a range of clinical manifestations. On one end of the spectrum is the patient with life-threatening disease, and at the other end is the patient who has only the musculoskeletal clinical features of the syndrome.

Cutaneous findings of Marfan syndrome may be subtle. The presence of striae distensae is almost universal. Adipose tissue is decreased, and patients often appear extremely thin. Elastosis perforans serpiginosa is seen with a high incidence in Marfan syndrome and is caused by the extrusion of abnormal elastic tissue through the epidermis. Ocular involvement often leads to an upward displacement of the lens (ectopia lentis). Myopia is often seen, as well as a decreased ability to constrict the pupil.

The respiratory and cardiovascular systems are commonly affected. Pulmonary blebs can be seen in an apical location. The blebs may spontaneously rupture, causing a pneumothorax. Severity of involvement of the cardiovascular system is the best prognostic indicator in Marfan syndrome. Prolapse of the mitral valve, aortic root dilation, and early-onset calcification of the mitral valve anulus are a few of the cardiovascular findings. The leading cause of mortality is rupture of an aortic aneurysm or aortic dissection.

Pathogenesis: Fibrillin-1 is a glycoprotein found in a wide range of connective tissues. Fibrillin-1 is required for proper elasticity and strength properties of the extracellular matrix. Many hundreds of mutations have been reported in the gene that encodes fibrillin-1. There is a wide phenotypic variability in Marfan syndrome, due in some part to the different mutations of the gene but also to other, as yet undescribed factors. This leads to a large variation in phenotype among individuals with the same genotypic mutation.

Defects in the fibrillin-1 protein lead to a decreased ability to bind to calcium. This ultimately manifests as abnormalities of the microfibrils throughout the connective tissue. These abnormal microfibrils are more susceptible to degradation by matrix metalloproteinases, and when they occur within the connective tissue lining of the vascular walls, the lining’s elastic and strength properties are compromised. This may lead to dilation, increased stiffness, aneurysm, and eventual dissection of arterial walls, with the aorta being the most commonly affected vessel.

Treatment: All patients with Marfan syndrome should be monitored directly by a cardiologist and a cardiothoracic surgeon as needed. Routine echocardiograms and evaluations for aortic aneurysms are required. β-Blockade has been shown to be helpful to decrease mean arterial pressure. This reduces the pressure on the weakened vessel walls and subsequently decreases the likelihood of arterial dilation, dissection, and aneurysms.

Calcium channel blockers and angiotensin-converting enzyme (ACE) inhibitors are second-line agents. Patients with Marfan syndrome who are closely followed and treated promptly may live a normal life span. They must be educated to avoid strenuous physical activity and contact sports. Surgery to repair aortic dilation and aneurysm is required once the caliber of the aorta reaches 5.0 cm or if the rate of enlargement is greater than 0.5 cm/year. Ocular disease should be evaluated and treated promptly by an ophthalmologist.