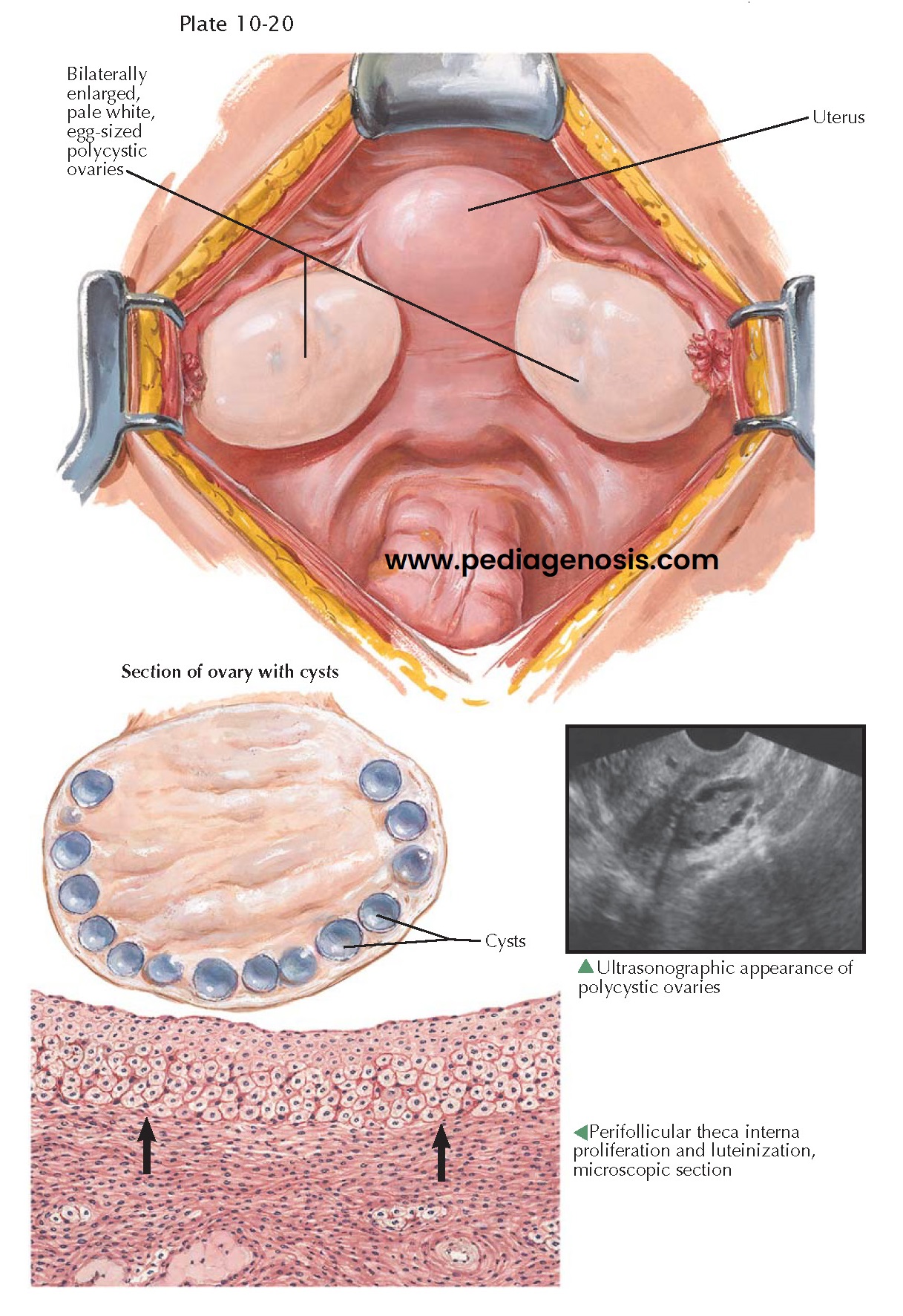 In 1935, Stein and Leventhal described a group of patients in whom the symptoms of amenorrhea, sterility, slight hirsutism, and occasional obesity were associated with the presence of bilaterally enlarged, polycystic ovaries. The syndrome is now known as polycystic ovary syndrome (PCOS). The exact pathophysiology of PCOS is not well established, but increased amplitude of gonadotropin-releasing hormone (GnRH) pulsation and abnormal secretion of follicle-stimulating hormone (FSH) and luteinizing hormone (LH) during puberty are thought to result in androgen excess. Elevated levels of LH persist and may be used to help establish the diagnosis. Insulin resistance is a prominent aspect of this syndrome (40% of patients). It is clear that there is a genetic predisposition to PCOS; however, it is likely that several genes are involved.

The syndrome is not infrequent: up to 5% of women and 30% of secondary amenorrhea cases. It is the most common hormonal disorder among women of reproductive age. A consensus conference has deﬁned PCOS as having two of the following three: irregular cycles, clinical or biochemical evidence of hyperandrogenism or polycystic appearing ovaries on ultrasound, as well as no evidence of another cause of anovulation. The patient usually presents because of infertility or secondary amenorrhea. Some degree of virilism is evident in 70% of cases. Hirsutism may be minimal or conspicuous, involving the face, chest, breasts, and extremities, with male escutcheon. Generalized obesity has been noted in 50% of cases. On pelvic examination, the ovaries are symmetrically enlarged to the size of golf balls. The uterus may be hypoplastic. Endometrial biopsy will usually reveal a proliferative phase. Elevated levels of LH may be used to help establish the diagnosis. (A 2:1 ratio of LH to FSH is considered diagnostic.) Patients suspected of having adrenal sources of hyper-androgenism can be screened for adrenal hyperactivity by measuring 24-hour urinary free cortisol, an adreno-corticotropic hormone (ACTH) stimulation test, or an overnight dexamethasone suppression test. Serum testosterone (total) is generally 70 to 120 ng/mL and androstenedione is 3 to 5 ng/mL. Dehydroepiandrosterone sulfate (DHEA-S) is elevated in roughly 50% of patients. Ultrasonography (abdominal or transvaginal) may identify ovarian enlargement or the presence of multiple small follicles. Magnetic resonance imaging or computed tomography may be used to evaluate the adrenal glands.

Grossly, the ovaries are conspicuously and symmetrically enlarged. They may be two to ﬁve times normal in size, round or oval in shape, and gray white or pearly white in color. The ovarian surface is smooth, with occasional slight elevations, suggesting the presence of underlying cystic follicles. At times, the gonads may be slightly ﬂattened (“oyster” ovaries), or one may be slightly larger than the other. On section, the tunica albuginea usually appears thickened. Beneath it, numerous cystic follicles, 2 to 15 mm in diameter, ring the cortex. The ovarian parenchyma is conspicuously hypertrophied and may contain occasional yellow ﬂecks. Microscopically, the important features relate to the presence of a hyperthecosis. Around many of the atretic cystic follicles, the theca interna layer shows marked proliferation and luteinization. The ovarian parenchyma appears hyperplastic, with evidence of increased cellularity. Many of the cells are more epithelioid in appearance. Small groups of luteinized cells may be seen scattered throughout the parenchyma.

Medical therapy has replaced surgical treatment. Treatment depends on the desire for pregnancy; if pregnancy is desired then ovulation induction may be required. Weight loss is often associated with resolution of symptoms and a return of menstrual function in patients with mild or early polycystic ovary disease. Combination oral contraceptives (50 g [microgram] formulation and a progestin other than norgestrel) may reduce further hair growth. If DHEA-S is elevated, dexamethasone may be added to oral contraceptives. Metformin (1500 mg/day) is often used as an adjunctive treatment for ovulation induction and is now considered as ﬁrst-line therapy for PCOS.

There is an increased risk of diabetes, endometrial hyperplasia, and endometrial carcinoma in patients with polycystic ovaries and chronic anovulation.