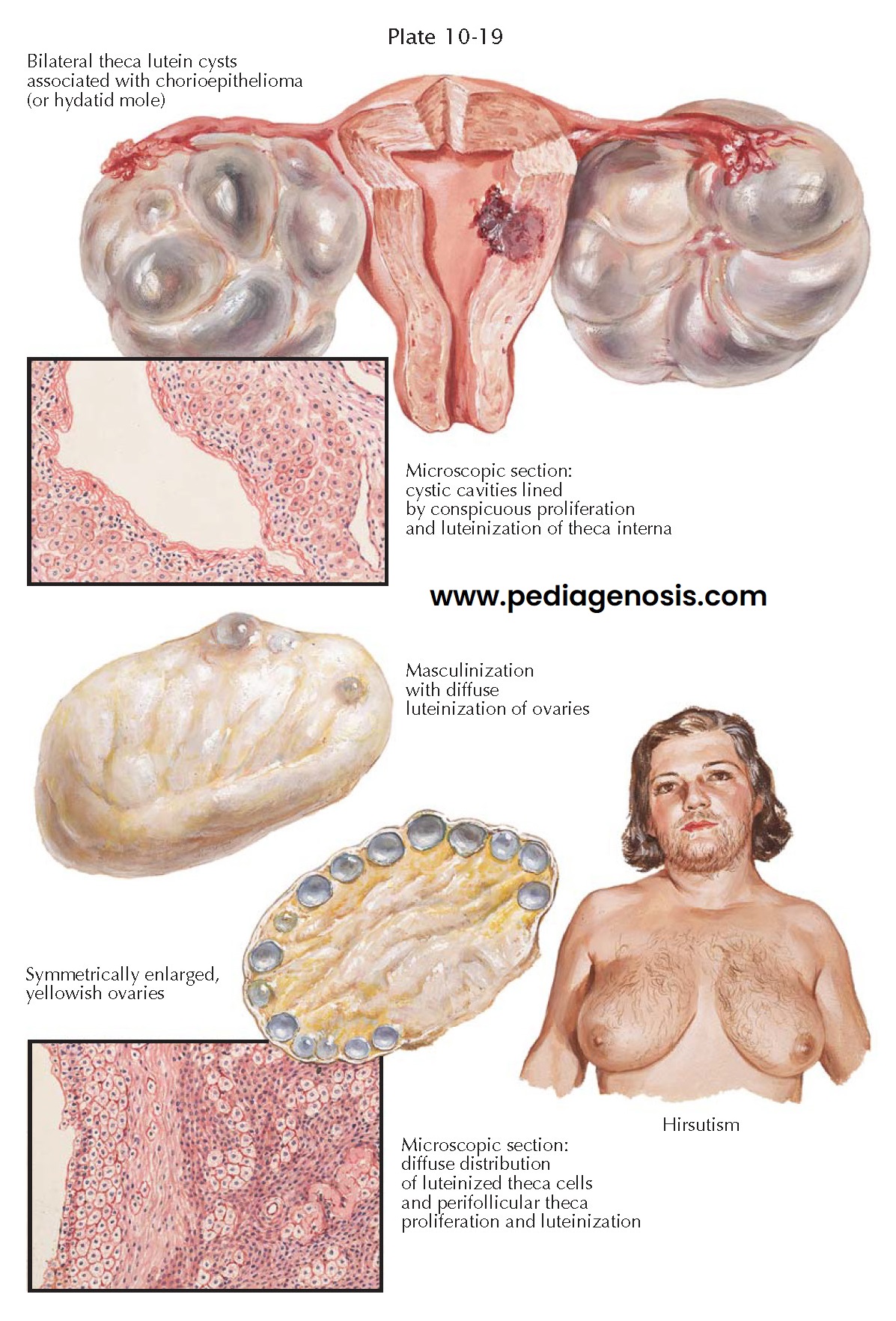 In the presence of a hydatidiform mole or chorioepithelioma, the ovarian response to the elevated gonadotropin level may be markedly exaggerated and give rise to multiple theca lutein cysts. A palpable enlargement of the ovary due to theca lutein cysts occurs in about 60% of hydatidiform moles and 10% of choriocarcinomas. The lesions may be small or may reach proportions up to 20 to 30 cm in diameter. Smaller theca lutein cysts may be found in multiple gestations. Bilateral involvement is usual, though often asymmetric. The ovaries are polycystic and irregularly oval in shape, with a lobulated, smooth surface. The individual cysts are of variable size, thin-walled, gray or translucent, and often tinged with yellow. On section, a multilocular or honeycombed appearance is noted. The contained ﬂuid may be clear, amber, or blood-tinged. The more solid portions of ovarian tissue may be edematous, with minute cystic cavities. Microscopically, the theca interna cells are strikingly hyperplastic and luteinized. The wall of a theca lutein cyst includes an inner lining of cicatricial tissue and an outer, thickened layer of luteinized theca cells. On occasion, areas of granulosa cells may be seen internal to the theca layer, with evidences of proliferation and luteinization. Isolated islands of luteinized theca cells may be scattered through the ovarian parenchyma. The multicystic ovaries may be asymptomatic or may manifest symptoms related to their increased size and weight. Following termination of the pathologic pregnancy, they gradually regress and disappear within a few to several weeks.

Masculinizing changes in the female occur, with hyperplasia, adenoma, or carcinoma of the adrenal cortex, pituitary basophilic adenoma, pituitary basophilism (Cushing syndrome), and thymic tumors, but they may also be produced by a variety of ovarian tumors, including the Sertoli-Leydig cell tumor, adrenal rest tumor, and hyperplasia of the Leydig cells of the ovarian hilum.

An additional masculinizing syndrome is that associated with diffuse luteinization of the ovaries, often known as hyperthecosis (thought to be a variant of polycystic ovary syndrome [PCOS]). In contrast to the primary, defeminizing ovarian tumors, the gonadal changes in this endocrinopathy are probably secondary. The clinical symptoms manifested by patients with diffuse luteinization of the ovaries include pronounced and progressive hirsutism of the face, trunk, and extremities; male escutcheon; hypertrophy of the clitoris; occasional voice and breast changes; obesity; oligo- or amenorrhea, preceded by irregular menses or menometrorrhagia; and sterility.

The ovaries are two to ﬁve times larger than normal, ﬁrm, smooth, and grayish white in color, with irregular areas of yellowish hue. On section, numerous small, cystic follicles rim the periphery of the cortex. The medullary portion of the ovary appears hyperplastic, with scattered orange-yellow areas. The essential features, on microscopic examination, include parenchymal hyperplasia, diffusely distributed accumulations of luteinized cells, and perifollicular theca cell proliferation and luteinization. Cystic atretic follicles are conspicuously distended. Scattered throughout the ovary, in both cortex and medulla, are irregular clusters or groups of large, round, or oval cells, with granular, light-staining, vacuolated cytoplasm and vesicular nuclei with distinct nucleoli. They resemble well-developed, luteinized theca cells. Sudan III stain shows them to be ﬁlled with lipid material. Although corpora albicantia are present, recent corpora lutea are usually not found.

The ovarian parenchyma suggests hyperplasia, not only because of its increased thickness but also because of the obviously increased cellularity. Many of the parenchymal cells appear epithelioid. The essential features of this entity are strikingly similar to those of polycystic ovary (Stein-Leventhal) syndrome, except for the more conspicuous masculinization and exaggerated diffuse distribution of luteinized cells within the parenchyma.