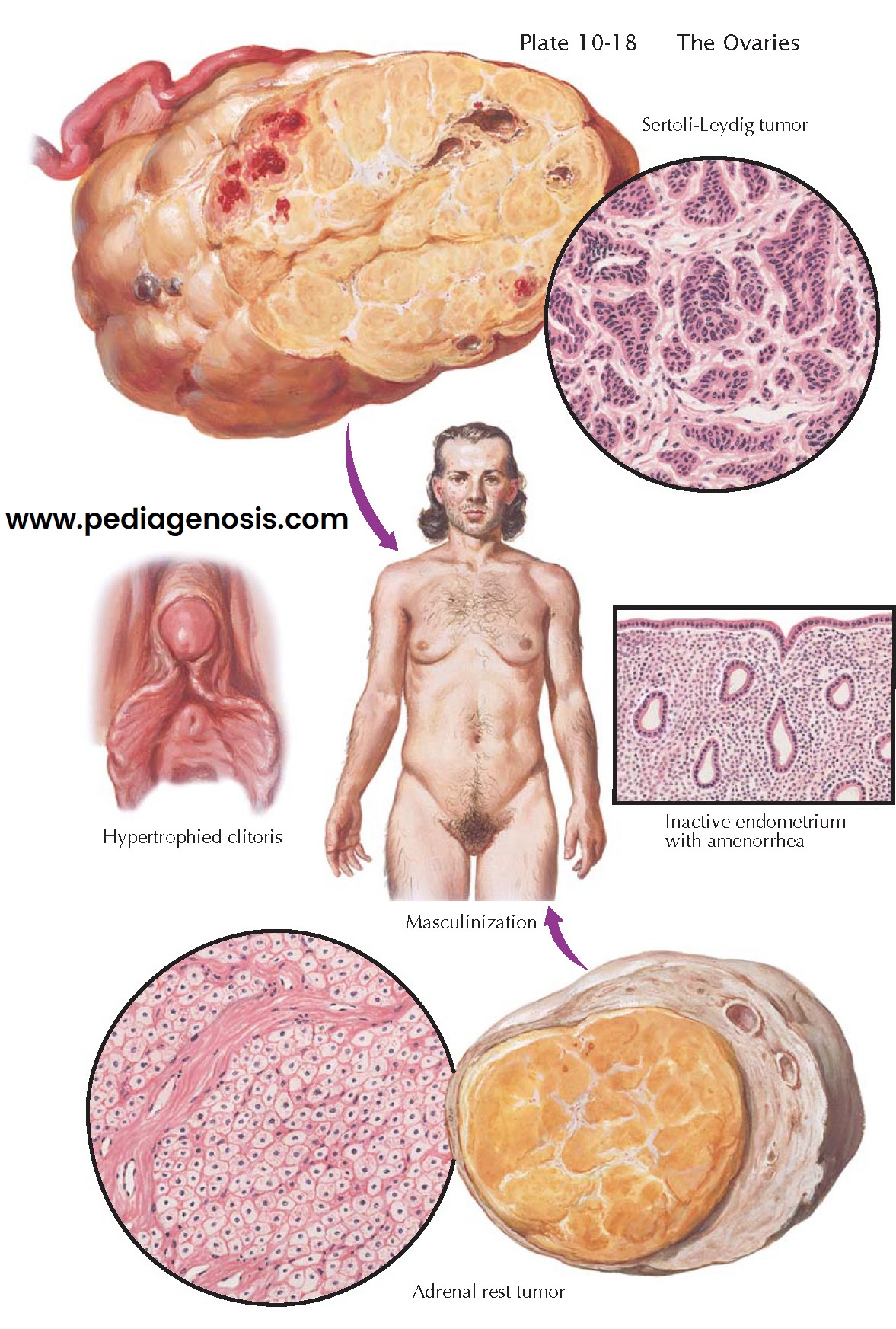 Masculinizing tumors are rare sex cord tumors of the ovary (<0.5% of ovarian tumors) that carry male elements and may be associated with virilization. Tumors vary in size but generally are 5 to 15 cm in diameter. For the sake of simplicity, they may be divided into two categories: the Sertoli-Leydig cell tumor (formerly arrhenoblastoma) and the adrenal rest tumor. The picture of virilization associated with these neoplasms is the result of defeminization and masculinization. Defeminization is manifested by amenorrhea, infertility, loss of feminine contour, decrease in size of the breasts, genital hypoplasia, and coarse skin texture. Masculinization is evident in hirsutism, male escutcheon, enlargement of the clitoris, increased muscular development, acne, and hoarseness of the voice. Metabolic disturbances, including hypertension and disorders of carbohydrate metabolism, are relatively uncommon with the adrenal rest tumors but may occur with Sertoli-Leydig cell tumors. Plasma levels of testosterone, androstenedione, and other androgens may be elevated; urinary 17-ketosteroid values are usually normal. (Androgen secretion by the tumor may result in erythrocytosis.) Laboratory studies cannot reliably differentiate between virilization caused by adrenal tumors and virilization caused by ovarian sources. Symptoms referable to the presence of a pelvic mass, torsion of a pedicle, necrosis, hemorrhage, and ascites may occur.

Therapy includes a surgical exploration and resection. Young patients with stage 1A disease (80%) may be treated with unilateral salpingo-oophorectomy. Undifferentiated tumors or advanced-stage disease requires more aggressive surgical resection and may be treated with adjunctive chemotherapy (vincristine, actinomycin D, and cyclophosphamide) or radiation.

The Sertoli-Leydig cell tumor is believed to be derived from originally male-directed cells of the indif-ferent bisexual, embryonal gonads. The tumors represent varying degrees of similarity to testicular structures. Although rare, Sertoli-Leydig cell tumors are the most common of the masculinizing tumors. The predominant age is older than 30 (70%), with less than 10% older than 50. The tumors are unilateral (95%), solid, smooth, lobulated, encapsulated, gray-yellow neoplasms. The size is generally between 5 and 15 cm. The cut surface is ﬁrm and grayish yellow. Numerous necroses, hemorrhages, and cystic changes can be recognized. Sex cord (Sertoli) cells and stromal (Leydig) cells are present in varying proportions, but tubular patterns predominate. Individual cells may appear immature. Lipochrome pigments (crystalloids of Reinke) are present in 20% of tumors. These tumors may be hard to differentiate from granulosa cell tumors and may mimic endometrioid or Krukenberg tumors.

The tumors tend to behave as low-grade malignancies, and the 5-year survival rate is reported to vary from 70% to 90%. Survival is poorer for higher stage and poorly differentiated tumors. Excessive hair often regresses but does not disappear; clitoral enlargement and voice changes (if present) are unlikely to reverse. Pregnancy is unlikely in the presence of these tumors because of anovulation induced by the hyperandrogenism, although there is no direct effect on the pregnancy, should they coexist. (Hormonal effects on the fetus could be postulated; however, usually placental aromatase can convert androgens into estrogens except in cases of extreme hyperandrogenism.)

The adrenal rest tumors have also been referred to as luteoma, hypernephroid tumor, adrenal adenoma, and adrenocorticoid tumor. It is suggested that they may arise from aberrant adrenal rests. They are extremely rare, unilateral, solid, small, round or oval, encapsulated tumors, which may replace only part of the ovary. The surface is yellow-orange to brown, rubbery or moderately ﬁrm, and divided into lobules by ﬁbrous septa. Necrosis, hemorrhage, and cystic degeneration are frequent. Histologically, they may show irregular masses of large, polyhedral, sharply deﬁned cells, with prominent, irregular nuclei and abundant, ﬁnely granular, vacuolated cytoplasm. Other areas may reveal nests or syncytial groups of small polygonal cells with uniform, round nuclei and solid, granular cytoplasm, resembling the peripheral cells of the adrenal cortex.